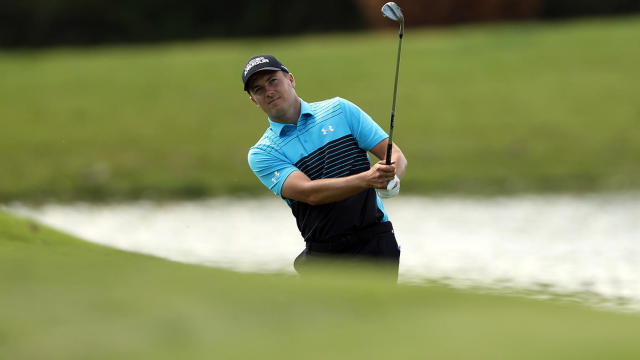 Jordan Spieth simply picked up right where he left off when he won the Valero Texas Open and tied for third in the Masters early last month.

Local favorite Spieth sank an incredible 55-foot walk-off eagle putt on the final hole to cap a bogey-free, 9-under-par 63 and tie J.J. Spaun for the lead after the first round of the AT&T Byron Nelson at TPC Craig Ranch in McKinney, Texas.

“I was just trying to get the speed perfect and thought it was going to miss left,” Spieth, who has won 15 times on the PGA Tour, said of his putt on No. 18. “Then it just fell in the hole and it was a cool moment. The crowd went nuts and that’s about as big a roar as you are going to hear on a Thursday.

“It was the first time the Tour has played on this course and nobody knew exactly what to expect, but the rain (earlier in the week) made the course get-able. I thought I played pretty boring golf most of the day, but I had some nice par saves and made some birdies.

“I didn’t practice for three weeks, so I was a little nervous on the first hole.”

Spieth, who contracted Covid-19 and was in quarantine during his break, collected five birdies on the front nine and two more coming home before electrifying the crowd with his eagle.

Spaun, from Los Angeles and San Diego State, started on the back nine and collected five birdies before adding four more on the front while finishing his own bogey-free 63.

“I haven’t been in this position in a while,” said Spaun, who has two pro victories, the last in the 2016 News Sentinel Open on what is now the Korn Ferry Tour, but is winless on the PGA Tour. “I’m just going to keep trying to do what I been doing last week (a tie for 18th in the Wells Fargo Championship) and this week. … just stay in the present.

“You know, don’t be scared. Fire away. Make as many birdies as I can. If I do it, great. If I don’t, well as least I tried. That’s the mindset I’m going to take into tomorrow and for the rest of this week.”

Aaron Wise of Lake Elsinore, who claimed his only PGA Tour victory in the 2018 AT&T Byron Nelson, had four birdies on each nine in a bogey-free 64 and is tied for third with Rafa Cabrera Bello of Spain, who birdied his first four holes and three of the last five, Doc Redman, who birdied the last three holes, and Joseph Bramlett of Saratoga and Stanford, who made the last two of his eight birdies on Nos. 17 and 18.

Sergio Garcia of Spain, who won this tournament in 2004 and 2016, birdied the last hole for a 65 and is in a huge tie for seventh with Sam Burns, Charl Schwartzel of South Africa, Ben Martin, Seamus Power of Ireland, Luke Donald of England, Mark Hubbard, Jhonattan Vegas of Venezuela, Alex Noren of Sweden, Charles Howell III, Kyoung Hoon Lee of South Korea and Michael Gligic of Canada.

Defending champion Sung Kang of South Korea, who won the tournament in 2019 and was unable to defend his title last year because the event was cancelled because of Covid-19, is tied for 34th at 67.

Third-ranked Jon Rahm of Spain shot 68 and is in a tie for 54th that includes Hideki Matsuyama of Japan, playing for the first time since winning the Masters last month, and fourth-ranked Bryson DeChambeau is tied for 77th at 69.