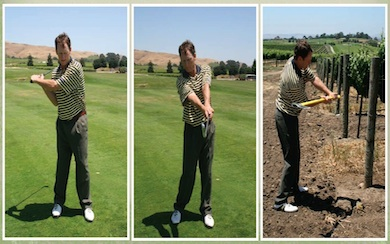 If you were boxer throwing a jab but you did it with your arm perfectly straight or stiff from the start, it would be a very weak punch. But if you throw that jab with your arm bent and it doesn’t straighten until you’ve hit your opponent, the result is a lethal punch. The same applies to golf. If you are ingrained with the ancient instructional dictate of having a straight left arm when making your swing (and you would be in the 96 percentile if that’s the case), the idea of a bent or soft left arm sounds like heresy. But it is, in fact, the most effective way to create the most powerful shots you have ever hit.
To put it in another context, say you have an axe and want to chop down a tree. When you swing that axe are you going to do it without any bend in your arms? No. If you were a hitter at the plate, are you going to swing the bat at a fastball with your arms stuck out stiffly in front of you? Of course not. So why should you do it when you hit a golf ball?
The point we are making recalls what “Wild” Bill Mehlhorn said many years ago. Mehlhorn came on the scene in 1919 and won over 20 PGA Tour events, and he was a pioneer in the development of American golf and the pro tour. Ben Hogan once said Mehlhorn was the best ball-striker he ever saw. Melhorne believed you can and should bend your left arm in the backswing. When his playing career ended, Mehlhorn took to teaching. He had no use for the stiff left arm, and you can tell to this day those who have been influenced by his teaching–they all have a soft left arm.
I like my students to pretend they are using an axe to chop down a tree or hit a belt-high fast ball with a baseball bat. If you try this and repeat it back and forth from back swing to the contact position, you’ll experience the natural timing of the bending of the wrists and elbows in the back swing and forward swing.
Try a few repetitions to get the feeling for the bending of the left elbow in the backswing and how it straightens in the forward swing just past the point impact. Next, tilt forward into your golf posture and try the same action with the soft left elbow folding in the back swing and straightening just past where the golf ball would be.
Next, practice hitting the ground and extending through to where both arms are fully extended. When you’re ready, try a few balls with a nine iron or wedge with the same length of swing, hitting the balls just 30 or 40yards until you can time the shots consistently.
To integrate this into your full swing, like any new exercise, do it a few times without a golf ball to get the right feeling. In the forward swing, hit the mat or make a divot before both arms get the chance to straighten. As they straighten they should finish with the club shaft online with your left arm and the butt of the club pointing back to your belly button. Hold for two to three seconds. When this gets easier to do, after holding the short finish,move the club into a full-swing finish. Repeat this until you feel you can do this in a seamless motion.
If you’d like to see this in action, I have this golf tip and more on www.youtube.com/krismoegolf. Give my soft arm exercise a try, I think you’ll be pleasantly surprised how simple and effective it can be. Best wishes with your golf. CGN
Kris Moe played the PGA Tour in the US and Europe and finished top 25 in the1985 British Open. He now operates the Kris Moe Golf Schools at the Chardonnay Golf Club, in Napa and Poppy Hills, in Pebble Beach. He also offers private golf lessons in his indoor studio, in down-town San Francisco. He can be reached at: 707-939-0523 or at his website www.krismoegolfschools.com