Smith Shoots 9-Under 64, Increases His Lead to Three Strokes in Sentry TOC 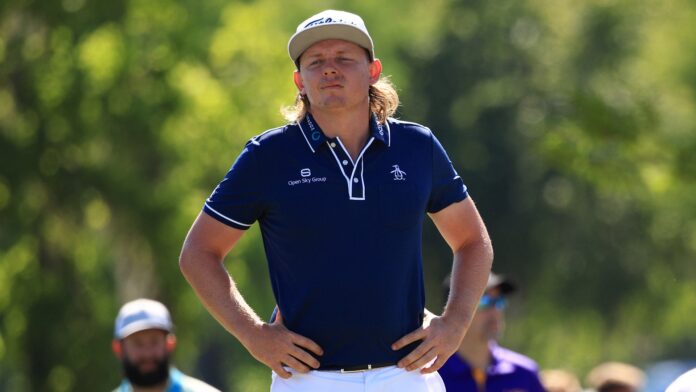 Cameron Smith of Australia played so well that he increased his lead against the best golfers in the world.

The 28-year-old Smith, who led by one stroke after the first round, started bogey-bogey but then shot 9-under par 64 to take a three-stroke lead over top-ranked Jon Rahm of Spain and Daniel Berger after two rounds of the 2021 Sentry Tournament of Champions on the Plantation Course at Kapalua Resort on the Hawaiian island of Maui.

The tournament is for winners-only in 2021.

“I just hit a few poor shots on the first two holes and had to hit the re-set button,” said Smith, who captured the 2021 Zurich Classic of New Orleans with teammate Marc Leishman for his third victory on the PGA Tour and fifth as a pro. “It really wasn’t nerves, but I didn’t have a very good warmup and didn’t feel comfortable with my swing at first.

“But I felt very good with my putter today and made a lot of putts, felt very good on the greens. The putts were just going in the hole all day. It was nice to see those putts just keep going in because I didn’t have my best iron game.

“Hopefully, I can get that part of my game going on the weekend and keep making the putts.”

Smith, who opened with a 65, holed out from 35 feet with a chip shot on the fifth hole in round two and collected nine birdies the rest of the way including four in a row to finish, and recorded a 36-hole total of 17-under 129 that equaled Ernie Els’ tournament record set in 2003.

Rahm, who is playing for the first time since the Ryder Cup in September, birdied four of the last seven holes in a second straight 66, while Berger sank a 16-foot eagle putt on the 15th hole is his own second 66.

“I feel people are making too much out of the fact that I haven’t played in a while, because I was practicing all that time,” said Rahm, the reigning U.S. Open champion. “I feel very comfortable on this golf course, played really well for two rounds and hope to keep it going on the weekend.

“I felt really good on the greens, but I felt they were a little slower today and left some really good putts just short, but I made some really good lag putts. Hopefully, I can get the speed going right and it will give me a chance to win.”

Fourth-ranked Patrick Cantlay of Los Alamitos and UCLA carded a bogey-free 67 and is four shots back in solo fourth, while reigning Masters champion Hideki Matsuyama of Japan shot 65 with a seven-foot eagle putt on the fifth hole and is five down in a tie for fifth with Sungjae Im of South Korea, who birdied four of the last six holes in a bogey-free 67.

Kevin Na of Diamond Bar sank an eight-foot eagle putt on No. 15 in a bogey-free 68 and is six behind in solo seventh, while 10th-ranked Sam Burns posted a bogey-free 64 that was low score of the day and is one more down in a big tie for eighth.

Also in the tie for eighth are Seamus Power of Ireland and Si Woo Kim of South Korea, who both had 65s, and sixth-ranked Xander Schauffele of La Jolla and San Diego State, who holed out for an eagle from 33 yards on the last hole for a 67.

Leishman and Stewart Cink also carded 67s and are in the tie for eighth along with former world No. 1 Brooks Koepka, who had a second straight 68.

Fifth-ranked Bryson DeChambeau of Clovis is tied for 15th after a 68 with five birdies on the last seven holes, while seventh-ranked Viktor Hovland of Norway totaled 69 and is in a tie for 22nd that includes second-ranked Collin Morikawa of La Canada Flintridge and Cal, who had five birdies on the back nine in a 70.

Eighth-ranked Justin Thomas is tied for 32nd after making four birdies on the last seven holes in a 67, while defending champion Harris English birdied the last hole for a bogey-free 70 and is tied for 36th.