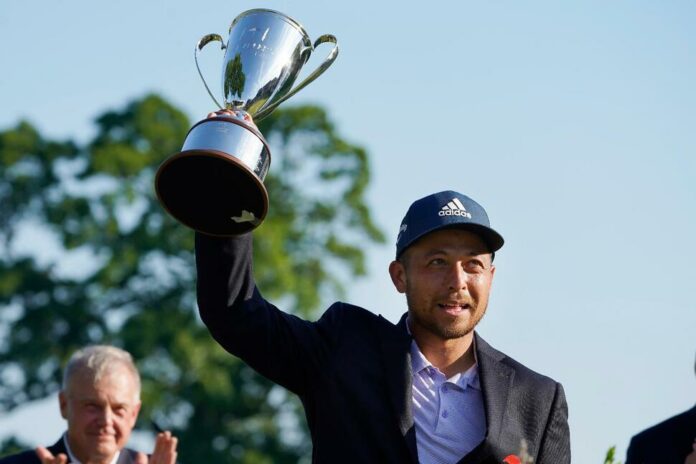 Schauffele (pictured), the 2021 Olympic Gold Medalist from La Jolla and San Diego State, sank a three-foot birdie putt to cap a 2-under-par 68 and won the 70th Travelers Championship by two strokes over Theegala and J.T. Poston at TPC River Highlands in Cromwell, Conn.

Theegala, the 24-year-old rookie from Chino Hills and Pepperdine, held a one-stroke lead while playing one twosome ahead of Schauffele, but hit driver off the tee on the 18th hole when he didn’t need that much club. He drove into a nearly unplayable lie in a fairway bunker, took two shots to get out and closed his 67 with a double-bogey 6.

“It’s just incredible,” said Schauffele, who claimed his fifth individual PGA Tour victory but the first since the 2019 Sentry Tournament of Champions. “I came to the last hole thinking I needed to make a birdie just to get into a playoff.

“Then when I was standing the on the tee, I saw that mishap by Sahith ahead of me and I knew all I had to do was hit the fairway and the green here on No. 18 to make at least a par to win the tournament, and that’s exactly what I did.”

Schauffele, who will climb back into the top 10 of the World Golf Rankings this week, started the tournament with 63-63 and played the weekend in 67-68, carding four birdies and two bogeys in the final round to record a winning score of 19-under 261.

Theegala, a three-time All-American who earned the Haskins, Hogan and Nicklaus awards as a senior at Pepperdine in 2020, collected five birdies and had a flawless scorecard until the disastrous last while also posting four scores in the 60s.

“I knew exactly where we stood,” said Theegala, who finished in the top 10 for the fifth time this season. “Never in a million years did I think I would allow myself to blade (his first bunker shot). All I had to do was chunk it. We even said, ‘Like, this is a 50/50 ball in terms of, I got to try to just basically hit just a hair behind it.’ Somehow my body just … I just straight bladed it.

“I had room there. I don’t know how it looked, but I had room there. I just didn’t think I would let myself blade it. But I guess the moment was … and then from there it’s, like, ‘I’ve got to try to make a 5 now.’ I had a little more room. And I did the same thought process. I nearly bladed it again.”

Poston, whose only PGA Tour victory came in the 2019 Wyndham Championship, had three birdies on each nine in a bogey-free 64 after sharing the first-round lead at 62 before playing the middle rounds in 70-67.

Amateur Michael Thorbjornsen, a junior at Stanford who grew up nearby in Wellesley, Mass., thrilled the local fans by making a tap-in eagle putt at No. 6 after a brilliant approach from 261 yards en route to a second straight 66 to finish four shots back in solo fourth, followed one more down by Chesson Hadley, who holed out from 28 feet for an eagle on the 15th hole in a bogey-free 64.

“It’s surreal, crazy actually,” said Thorbjornsen, who won the 2018 U.S. Junior Amateur and the 2021 Western Amateur. “It’s pretty cool and very special to do it here a home. I felt pretty comfortable out there, even though I had a couple hiccups toward the end. But I wasn’t nervous; that just happens sometimes.”

Keith Mitchell made four birdies in eight holes en route through No. 11 in a 67 and wound up seven strokes behind in a tie for sixth with Kevin Kisner, who made bogeys on the last two holes in a 71, while Scott Stallings shot a bogey-free 63 and finished eight shots back in a tie for eighth with Brian Harman, who made an eight-foot eagle putt at No. 13 in a 66, Chez Reavie and William McGirt, who both came in at 67, and Nick Hardy, who had a 70.