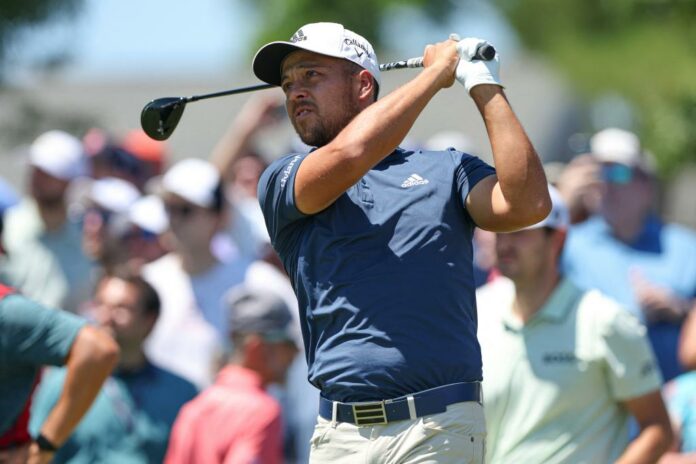 Xander Schauffele and Patrick Cantlay are atop the leaderboard again, but this time they are playing against each other.

Schauffele, who teamed with Cantlay to win the Zurich Classic of New Orleans in April, made two late birdies while shooting 3-under-par 67 and will take a one-stroke lead over Cantlay to the final round of the 70th Travelers Championship at TPC River Highlands in Cromwell, Conn.

“It will be fun (playing again with Cantlay in the final round, as they did in round three),” said Schauffele, the 2021 Olympic Gold Medalist who opened with 63-63 and made his first bogey of the tournament on the 13th hole in round three. “I’ve been looking forward to playing with Pat in a final round. We don’t get paired together very often in regular tournaments, only in those team ones. So there’s a certain level of comfort we have playing with each other and hopefully that pays off and hopefully we can make a lot of birdies.

“I think it probably helps that I’m playing with him, since I kind of know his game really well. I can kind of club off him, if anything. It’s going to be a lot of fun tomorrow. I’ve been looking forward to hashing it out with Pat, and not on a Tuesday.

“It’s only Friday. This is a course that’s giving up some birdies, and if you’re leading the pack and you get kind of comfortable, people are going to hunt you down.’’

Schauffele, who has four individual titles on the PGA Tour, lost all of the five-stroke lead he had to start of the day, but regained sole possession of the top spot with a 16-foot birdie putt on the 16th hole and added a four-footer for birdie at No. 17 before saving par with a seven-footer on the last hole to finish 54 holes at 17-under 193.

The sixth-ranked Cantlay, who has six individual titles, collected four of his seven birdies on the back nine in a bogey-free 63 that was the low round of the day.

“It’s nice to be out with Xander,” said Cantlay, the defending FedEx Cup champion and PGA Tour Player of the Year. “We actually haven’t played that much together in tournament play, maybe only three times in the last three, four years. So it will be good to go out there again with him. Hopefully, both of us play really good golf.

“If only it was a combined score again this week we would be doing well. It’s always nice to be out with him, if he’s on my team or if he’s not. I’m going to go out there tomorrow and try as hard as I can and let the chips fall where they may.”

Rookie Sahith Theegala of Chino Hills and Pepperdine sank a six-foot eagle putt on the 13th hole and was tied for the lead with Schauffele before making his only bogey on the last hole of a 64 and is three shots behind in third, followed one more back by Kevin Kisner, who made four birdies on the front nine in a 66.

Said Theegala, who has played in 25 PGA Tour events this season: “I know I’ve played a lot and I like the way my game is trending. I’ve been working very hard all year and it’s paying off, and I hope to keep it going tomorrow.”

Martin Laird of Scotland made four birdies on the front nine and his only bogey at No. 16 in a 66 and is five down in a tie for fifth with K.H. Lee of South Korea, who birdied four of the last six holes for another 66.

Amateur Michael Thorbjornsen, a junior at Stanford, carded another 66 and is six strokes behind in a tie for seventh with Webb Simpson, who had a bogey-free 66, first-round co-leader J.T. Poston, who holed a four-foot eagle putt at No. 16 on his way to a 67, and Nick Hardy, who had three birdies coming home to post a 68.

Top-ranked Scottie Scheffler, who has won four times this season including the Masters, birdied three of the last six holes for a 65 and is in a tie for 11th that includes defending champion Harris English, who wound up at 69, while second-ranked Rory McIlroy of Northern Ireland, who was tied for the lead after an opening 62, wound up at 72 and is tied for 31st.