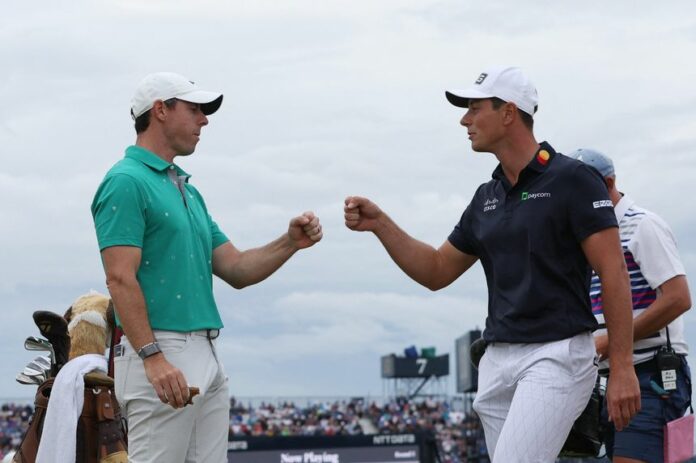 Second-ranked Rory McIlroy of Northern Ireland and ninth-ranked Viktor Hovland of Norway were side-by-side virtually all day on the course and the leaderboard.

McIlroy (pictured left) and Hovland (right), playing in the next-to-last twosome, both shot 6-under-par 66 and are tied for the lead heading to the final round of the 150th Open Championship on the famed Old Course at St. Andrews in Scotland.

“Victor and I both played well, it’s a comfortable pairing, and it should be fun again tomorrow,” said McIlroy, who was won four major titles but none since the 2014 PGA Championship, and made an improbable 82-foot bunker shot for eagle on the 10th hole.

“That shot was a little tricky because the ball was on a little knob, but I caught it just right and hit a really good shot, although I didn’t really imagine that it would go in the hole. Sometimes you have to get a little lucky if you’re going to win.

“I played really well and stayed patient all day. This is the best chance I’ve had to win a major in a while and hopefully I can play the type of golf that it takes again tomorrow. If I can do that for 18 more holes it should be good enough.

McIlroy, who won the 2014 Open Championship at Royal Liverpool Golf Course in Hoylake, England,  birdied three of the last five holes on the front nine and after his eagle made two more birdies plus his only bogey off the wall on the No. 17 road hole en route to a 54-hole total of 16-under 200.

Hovland, who has won three times on the PGA Tour but is seeking his first major title, carded four straight birdies through No. 6 and added two more on the back nine in his bogey-free round, a second straight 66 to earn his share of the top spot.

“It felt a little bit like match play with Rory,” admitted Hovland, who played college golf at Oklahoma State. “But I tried not to think of it that way and just tried to stick with what I was doing. I was going against one of the best players in the world and was able to hold my won. I would have taken a 66 before I started.

“I just want to relax out there and play my game, and not let a bad shot or a bad break affect me. It was great to play bogey-free and if I can shoot another 66 or close to that tomorrow, I should have a chance to win my first major.

“I just want to play the way I have been the last few days and hope it gets the job done.”

Sixth-ranked Cameron Smith of Australia, the 54-hole leader, made a double-bogey 6 on the 13th hole en route to a 73 and is four strokes behind in a tie for third with rookie Cameron Smith, who double-bogeyed No. 16 in a 71.

Said Smith, who won the Players Championship in March: “I felt I hit the ball as well as I did the first few days, but I’m a little frustrated because I just didn’t putt as well as I have been. I’ll have to get that cleaned up if I want to have a chance tomorrow.”

Top-ranked Scottie Scheffler, the reigning Masters champion  made birdie on the last hole to follow two 68s with a 69 and is five shots back in a tie for fifth with Si Woo Kim of South Korea, who had four birdies on the back nine in a 67, while two-time major champion Dustin Johnson carded an up-and-down 71 and is one more down in solo seventh.

Fourth-ranked Patrick Cantlay of Los Alamitos and UCLA is tied for 11th after four birdies on the front nine but no more in a 71, third-ranked Jon Rahm of Spain shot 71 with three birdies on the last five holes and is in a tie for 24th that includes fifth-ranked Xander Schauffele, the 2021 Olympic Gold medalist who eagled the last hole for a 70, and seventh-ranked Justin Thomas, the PGA champion, birdied the last two holes to salvage a 72.