Smith Putts His Way to 1-Shot Win Over Young in the 150th Open at St. Andrews 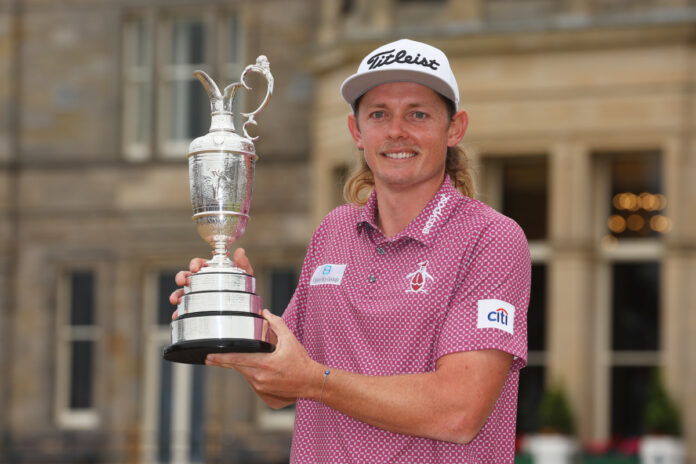 Cameron Smith of Australia simply tamed the storied Old Course with his putter to claim his first major title and become “Champion Golfer of the Year.”

The 28-year-old Smith came from four strokes back in the final round by shooting a bogey-free, 8-under-par 64 to beat rookie Cameron Young by one stroke, while second-ranked Rory McIlroy was another shot back in third in the 150th Open Championship at St. Andrews in Scotland.

The sixth-ranked Smith joined Jack Nicklaus as the only golfers to win the Players Championship and the Open Championship in the same year, both winning the oldest tournament in the world and claiming the Claret Jug at “The Home of Golf.”

“Winning the Players was great because that probably has the strongest field of the year, but to win the 150th Open at St. Andrews is just special,” said Smith, who claimed his eighth victory as a pro and sixth on the PGA Tour. “It’s something I’ve dreamed about since I was a kid. To see all the great names on this trophy and to add mine is just awesome. We’re going to find out how many beers it holds tonight.

“Thanks to the R&A and St. Andrews Links for setting up the course the way the Open Championship should be played. The course was firm and fast, and the pins were tucked into some difficult positions on the greens. To win this tournament is so cool.

“The driver felt good today and I drove the ball well, but I felt really good on the greens. I felt like if I could get the ball to within 15-to-25 feet of the hole I had a chance to make the putt, and they just kept going into the hole. I made a lot of birdies but the par putt on No. 17 probably was the biggest putt I made.”

Smith, who started with 67-64 but struggled to a 73 in round three, birdied two of the first five holes in the final round before collecting five straight birdies to start the back nine, making a 15-footer for par at No. 17 and finishing with another birdie to post a score of 20-under 268.

That tied the record for the lowest winning score in a major, held by several players, as Smith needed only 12 putts on the last nine holes including six one-putts.

Young, who won twice on the Korn Ferry Tour last season but has yet to win on the PGA Tour, sank a 17-foot eagle putt on the last hole to complete a 65, while McIlroy couldn’t buy a putt and finished with a bogey-free 70 after being tied for the lead entering the final round.

“I’m just disappointed because I had a great opportunity to add to my major total today and just didn’t get it done,” said McIlroy, who has won four times in the Grand Slam events but not since the 2014 PGA Championship. “I just didn’t take advantage of the opportunities I had this week, especially today.

“What Cam did to shoot 64 and win the Open is pretty amazing. I love the Open and St. Andrews, and I’ll keep coming back and trying to get it done. I played pretty well, but the putter just went cold on me today.

“If I keep playing the way I am, the door will open for me again.”

In the other majors this season, McIlroy was second in the Masters, eighth in the PGA Championship and tied for fifth in the U.S. Open.

Ninth-ranked Viktor Hovland of Norway, who was tied for the lead with McIlroy entering the final round, struggled to a 74 with only one birdie and finished six down in a tie for fourth with Tommy Fleetwood of England, who had a bogey-free 67, while two-time major champion Dustin Johnson totaled 69 to wind up one more stroke behind in a tie for sixth with Brian Harman, who birdied three of the last four holes to cap a 66.

Fourth-ranked Patrick Cantlay of Los Alamitos and UCLA, still seeking his first major victory, eagled the fifth hole and collected five birdies on the back nine for a 68 to finish eight shots behind in a tie for eighth with three-time major champion Jordan Spieth, who also shot 68, and 2020 U.S. Open winner Bryson DeChambeau of Clovis, who birdied the last three holes for a 66.

Fifth-ranked Xander Schauffele, the 2021 Olympic Gold Medalist from La Jolla and San Diego State, shot 67 to tie for 15th, while top-ranked Scottie Scheffler struggled to a 74 and wound up in a tie for 21st that included Matt Fitzpatrick of England, the U.S. Open winner, who had a 72.

Third-ranked Jon Rahm of Spain, the 2021 U.S. Open champion, tied for 34th after a 70, and seventh-ranked Justin Thomas, who won the PGA for the second time this year, eagled the fifth hole while closing closed with a 70 to tie for 53rd.