Smith Leads 150th Open by 2 Shots Over Young After 64 at St. Andrews 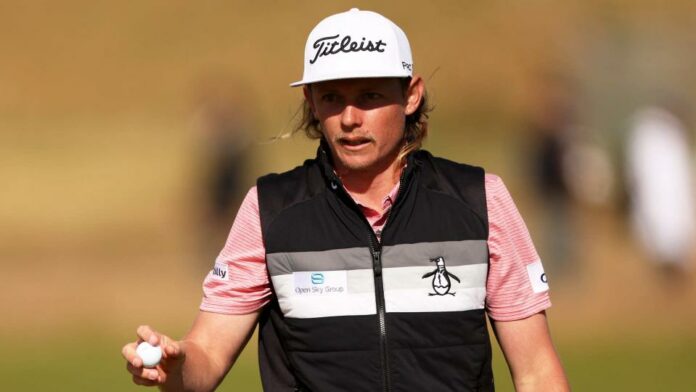 Sixth-ranked Cameron Smith of Australia might be halfway to his first major title.

The 28-year-old Smith carded a bogey-free 8-under-par 64 to take a two-stroke lead over rookie Cameron Young after the second round of the 150th Open Championship on the fabled Old Course at St. Andrews in Scotland.

“I think I’m a much better links golf player than I used to be, have just learned how to do it the last few years,” said Smith, who won the Players Championship, the so-called fifth major, in March. “That was pretty cool out there. A lot of things went right, but to do it here at St. Andrews, ‘The Home of Golf,’ was awesome.

“I hit one of the worst shots all day on the first hole, but then made a great putt and got off to a fast start. Most of the holes were playing into the wind, but I hit my driver very well all day and made a lot of putts, even the long ones, they were just going in. I just felt really comfortable out there and stayed out of the bunkers.

“It’s Adam Scott’s birthday, so I guess we’ll go out to dinner tonight. Then I’ll try to sleep in a much as I can before doing a little cardio to get ready for tomorrow afternoon.”

Smith, who also won the Sentry Tournament of Champions in January and has six top-10 finishes this season including a tie for fourth in the Masters, sank a 47-foot putt on the opening hole for the first of his six birdies and added a monster 64-footer for eagle at No. 14 on his way to a 36-hole total of 13-under 131.

His total in relation to par set an Open record for two rounds.

Young, who led after the first round with his own bogey-free 64, made the last of his five birdies on the final hole to complete a 69.

“I hit the ball about as well as I did in the first round, but I just didn’t putt as well,” said Young, who won twice on the Korn Ferry Tour last year but is seeking his first PGA Tour victory. “I hit some good shots into the greens again, but just missed some chances for birdies not unlike some of the ones I made yesterday.

“But I’m getting more comfortable being around the lead in major championships and it was nice to make a birdie putt on the last hole after I missed some others earlier.”

Second-ranked Rory McIlroy made four birdies on the back nine on his way to a 68 and is three shots behind in a tie for third with ninth-ranked Viktor Hovland of Norway, who holed his second shot from the rough fort an eagle on No. 15 while shooting 66.

Said Mclroy: “The greens were definitely slower today after the rain this morning and you had to make sure you got the ball to the hole. I had a good look at No. 17 and it was nice to see that one drop in for a nice finish to the day’s work.”

Two-time major champion Dustin Johnson made his only bogey on the first hole and collected four of his six birdies on the back nine in a 67 to wind up four down in solo fifth, while top-seeded Scottie Scheffler, the Masters champion, made three straight birdies through No. 10 and added another on the last hole in a second 68 and is one more back in a tie for sixth with Tyrrell Hatton of England, who had three birdies on each nine in a bogey-free 66.

Fourth-ranked Patrick Cantlay of Los Alamitos and UCLA birdied five of the first nine holes in a 67 and is six strokes behind in a tie for eighth with rookie Sahith Theegala of Chino Hills and Pepperdine, who holed his second shot for an eagle at No. 9 in a 68, Taylor Gooch, who had two late birdies in a 69, and Scott, the 2013 Masters champion from Australia, who had a bogey-free 65.

Eight-ranked Collin Morikawa, the defending champion from La Canada Flintridge and Cal, finished at 72-73—145 and missed the cut by one stroke.

Tiger Woods, the 15-time major champion who won two of his three Opens at St. Andrews, wound up at 78-75—153 and missed the weekend by nine strokes in what could have been his final appearance on the Old Course.

“I don’t know if I’ll be physically able to play another Open here at St. Andrews,” said an emotional Woods, who was playing for only the third time this season after sustaining a severe right leg injury in a rollover SUV accident early last year, and was cheered loudly by the crowd as he crossed the Swilken Bridge on the final hole.