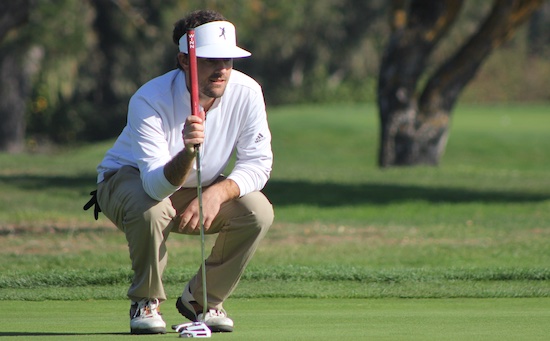 Scott Raber of El Macero led almost from wire-to-wire and held on for a one-stroke victory over Connor Golembeski of Redmond, Wash., and Simon Kwon Salt Lake City in the 20th AmateurGolf.com Christmas Classic at Del Monte Golf Course in Monterey.

Raber, a native of Davis, stumbled with three straight bogeys through No. 16 in the final round and faced a tough chip shot from a scroungy lie 50 yards behind the 17th green, but hit it close enough to save par and added one more par at No. 18.

“I ended up in kind of a weird spot left of the (17th) green,” said Raber, who played at college golf at Chico State. “I could have tried getting it close, but with it sitting on the sand the last thing I wanted was to get too cute and end up in the front bunker where it probably would have plugged on me.

“My playing partner, Ben Corfee, and I won the NCGA Four-Ball (in 2015,) but from an individual perspective, this is probably my biggest amateur victory.

“I think it was just keeping the ball below the hole,” Golembeski said of his final-round, which included eight birdies. “I struggled with that yesterday on the back nine, which led to a lot of bogeys. So, I made a point of it today.”

Michael Staskus of Monterey captured the Senior Division by three strokes with a score of 77-72—149, while Tony Ralph of Sunnyvale shot 76-76—152 to tie for second with Corey Synnestvedt of Napa, who wound up at 73-79—152.

Kristen Lee of Pleasanton, who played college golf at Chapman, claimed the Net Division title by three shots with a score of 79-70—149, followed by Marc Sanders of Turlock at 73-79—152, and Scott Henrickson of Laguna Nigel at 73-80—153.