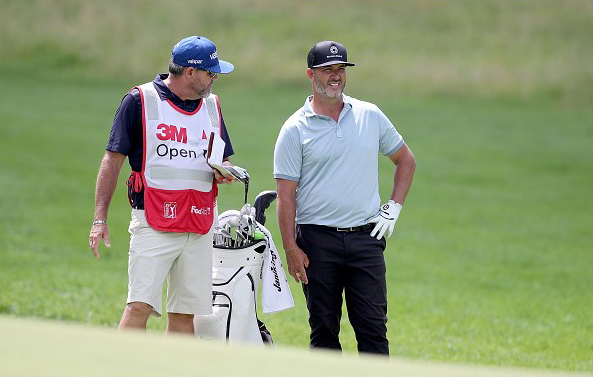 Scott Piercy simply picked up where he left off the day before.

The 43-year-old Piercy shot a brilliant, bogey-free 7-under-par 64 to take a three-stroke lead over Emiliano Grillo of Argentina after the second round of the 3M Open at TPC Twin Cities in Blaine, Minn.

“Obviously, it feels great because it’s been a while since I’ve played the way I can, and I guess I just had to prove it to myself again,” said Piercy, who has three individual titles on the PGA Tour, but none since the 2015 Barbasol Championship. “I know it’s in me, I just have to bring it out.

“I went to a new putter yesterday and it gets me a little farther from the ball and makes me more stable. The ball comes off the putter a little hotter and where in the past I had a tendency to leave putts short, now I’m getting the ball to the hole and a lot of them are going i8n.

“I’ve done a good job so far, but there’s a lot of work to be done on the last two days this weekend, but I’m feeling good about it.”

Piercy, who missed the cut in 12 of his previous 24 events this season, started at No. 10 and birdied his first four holes before reeling off six straight pars and then adding three birdies while finishing on the front nine to record a 36-hole score of 13-under 129.

Grillo, who tied for second recently in the John Deere Classic, sank a 40-foot eagle putt on the sixth hole and added five birdies against a single bogey on the No. 14th in a 65. He missed another eagle putt from seven feet at No. 12 and tapped in for birdie.

“Anything under par on windy days, it’s a plus,” said Grillo, whose only PGA Tour victory came in the 2016 Frys.com Open on the North Course at Silverado Resort and Spa in Napa. “I was able to manage the ball pretty well, and I was able to make the putts when I had the chance.

“This year, the days that I played bad around the greens, it’s just because I was hitting it very poorly or I just didn’t want to be there. I would say that 90 percent of the rounds this year I putted really well. Obviously, it helps when you hit it close and when you make a few that kind of gets your momentum going and the hole gets a little bit bigger.

Callen Tarren of England missed a 46-foot eagle putt on the last hole that would have tied Piercy’s TPC Twin Cities course-record of 62 set in 2019, but tapped in for a birdie and is five shots back in solo third after his 63.

Said Tarren, who is battling to keep his PGA Tour card for next season: “I’ve got nothing to lose and a lot to gain. I’m just going to keep the foot to the floor and make as many birdies as possible. … I don’t know what it is, but I feel calm, I feel chilled, I feel confident.”

Tony Finau, one of the tournament favorites, carded a bogey-free 68 and is six down in a tie for fourth with Robert Streb, who had three birdies on the back nine in a bogey-free 67, Tom Hoge, who had five birdies and two bogeys in a 68, Doug Ghim, who made two late birdies in another 68, and first-round co-leader Sungjae Im of South Korea, who had five birdies, two bogeys and a double-bogey 6 at No. 2 in a 70.

Lee Hodges made two birdies on each nine in a bogey-free 67 and is eight strokes behind in a tie for ninth with Patton Kizzire, Chesson Hadley, Jared Wolfe and Peter Malnati, who all came in at 69.

Michael Thompson, the 2020 3M Open champion, is tied for 36th after a 69, former world No. 1 Jason Day of Australia shot 72 and is tied for 46th, and defending champion Cameron Champ of Sacramento bounced back from an opening 75 by making four birdies on his last five holes to cap a 68 and made the cut on the number in a tie for 63rd.

Hideki Matsuyama of Japan, the 2021 Masters champion, withdrew because of a wrist injury after shooting 77 in the first round.