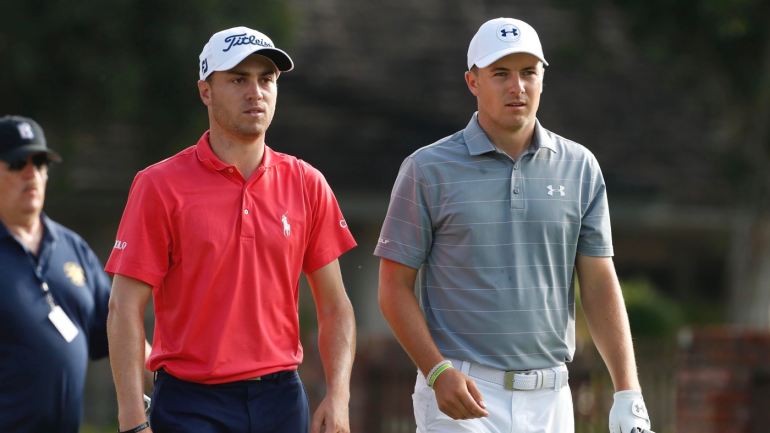 If the FedExCup playoffs are anything like the PGA Tour’s regular season, golf fans are in for quite a ride.

When Justin Thomas (pictured left) claimed his first major title two weeks ago in the PGA Championship at Quail Hollow, it was his fourth victory of the season.

That moved him ahead of world No. 1 Dustin Johnson, second-ranked Hideki Matsuyama of Japan and third-ranked Jordan Spieth, who all have three PGA Tour victories in 2016-17.

The last time four players won three or more times in a season on the circuit was in 2003, when Tiger Woods led the way with five titles.

The fearsome foursome will be trying to add to their totals this week in the Northern Trust, the first of four legs in the FedExCup playoffs at the Glen Oaks Club in Old Westbury, N.Y.

Spieth (pictured right), third in the point standings, is the only one of the four who has hoisted the Cup following the Tour Championship at East Lake Golf Club in Atlanta. He did so by earning a four-stroke win in the 2015 finale.

After finishing in a tie for 28th in his bid to become the sixth player to complete the modern Career Grand Slam at Quail Hollow, Spieth said he will be ready after a week off to make another run for the title during the playoffs.

“These two weeks take a lot out of you,” said Spieth, who is third in the FedExCup point standings after finishing in the top 10 on eight occasions this season. “It was hot. We had delays. They were long days. World Golf Championship and a major championship mentally is draining whether you are in contention or not.

“Definitely going to have some recovery going in (to the playoffs). I’m going to approach the first two events trying to obviously win but looking to kind crescendo into East Lake and peak there, and consider East Lake a major at this point as far as our preparation goes.”

Spieth knows that any player in the top five entering the Tour Championship would claim the FedExCup with a victory at East Lake.

A day earlier after the third round of the final major of the season, with his PGA hopes dashed, Spieth was already looking ahead to the playoffs when he said: “This is only the start of the fourth quarter.”

Johnson rose to No. 1 in the world by winning three times early in the season before sustaining a back injury on the eve of the Masters. He was unable to play at Augusta National before missing the cut in the U.S. Open at Erin Hills. He tied for 54th in the Open Championship at Royal Birkdale and tied for 13th in the PGA Championship.

DJ slipped from the lead in the point standings to No. 4, but he knows he can make up for it in the playoffs.

“The next six weeks are big: the four playoff events and Presidents Cup,” said Johnson, who maintains he is healthy. “I enjoy playing Presidents Cup. I’m looking forward to it. I need to take a few days to relax, and then it’s time to get back at it.

Matsuyama, who captured the WGC-Bridgestone Invitational by five shots a week earlier when he closed with a 61, was disappointed with his tie for fifth in the PGA. He is still trying to become the first Japanese player to win a major.

However, he takes the FedExCup points lead into the playoffs and should be a force to be reckoned with.

“I haven’t won a major yet,” said Matsuyama, who has won seven times around the world since last October. “I have a lot of work left to do, but that’s not to say that I don’t have confidence.”

The FedExCup could almost make up for that missing major.

Thomas has been enjoying his first two weeks with the Wanamaker Trophy after his two-stroke victory at Quail Hollow, but he figures to be ready when he hits the first tee on Thursday.

While celebrating his PGA victory, he already was thinking about the playoffs. Thomas is second in the point standings.

“You know, we’re getting to the end of the year,” Thomas said during his press conference after the final major of the year. “We’re getting to crunch time and the FedExCup and the playoffs, and this puts me in a lot better position than I was before the week started.

“I’m just excited for that, I’d say more than anything.”

Henrik Stenson of Sweden, the 2013 FedExCup champion, also is a player to watch after he claimed the Wyndham Championship last week for his first victory since the 2016 Open Championship at Royal Troon. He jumped to No. 23 in the standings.

The only real question mark is defending FedExCup champion Rory McIlroy of Northern Ireland, who was 44th in the standings last week. He considered sitting out the rest of the year because of injuries but committed to the Northern Trust late last week.

With or without McIlroy, the season figures to end with an exclamation point.