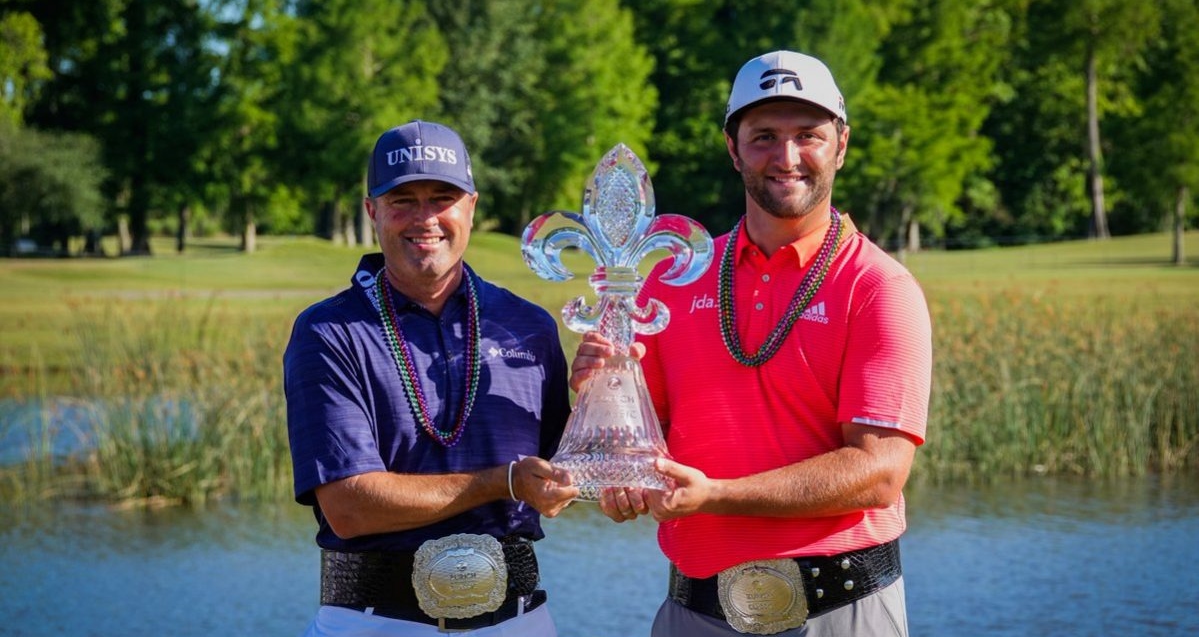 Other than the Ryder Cup and the Presidents Cup, PGA Tour golfers don’t get many chances for team play, and one comes this week in the Zurich Classic of New Orleans at TPC Louisiana in Avondale, La.

The lead member of each two-man team comes from the PGA Tour priority rankings, and he chooses a partner who also is a member of the tour or gets into the tournament on a sponsor exemption.

The teams play better-ball (also known as four-ball) in the first and third rounds, and alternate shot (or foursomes) in the second and fourth rounds.

This is the fifth year since the Zurich made the switch from a regular tour event to the team tournament, with Jonas Blixt of Sweden and Cameron Smith of Australia winning the inaugural two-man event in 2017 in a playoff over Scott Brown and Kevin Kisner, with Billy Horschel and Scott Piercy winning the following year by one stroke over Jason Dufner and Pat Perez.

Jon Rahm of Spain and Ryan Palmer (pictured) claimed the title by three strokes over European Ryder Cup teammates Tommy Fleetwood of England and Sergio Garcia of Spain in 2019, but last year’s tournament was one of several cancelled because of the Coronavirus pandemic.

Horschel, who recently won the WGC-Dell Technologies Match Play and is teamed with Sam Burns this year, captured the Zurich Classic of New Orleans by one stroke on his own in 2013 when he closed with 66-64—including a 23-foot birdie putt on the last hole.

“To win here, I mean, New Orleans is a great town,” Horschel said. “I love this city. I absolutely love this city. Fans are great; the food’s great; I have some really great friends here.

“ … Like I said, I love this city and I love Zurich (one of his sponsors). It’s nice to always come back here. Once I get off the plane, once I get picked up by transportation people, the volunteers that transport us week in and week out here, I feel at home.”

Palmer teamed with Jordan Spieth in the first two years of the Zurich team event, but when Spieth changed his schedule and decided not to play in 2019, Palmer went looking for a new partner.

He found a pretty good one—Rahm, who is No. 3 in the World Golf Rankings these days.

“I shot him a text, hoping he would bite,” Palmer recalled. “When a 42-year-old player is calling him, he’s probably like, ‘Why does he want to play with me?’ But he accepted and what an awesome week.

“It was nice playing the last hole with a three-shot lead. That’s for sure.”

Among the other top teams in the field are fifth-ranked Xander Schauffele and 10th-ranked Patrick Cantlay, fourth-ranked Collin Morikawa and Matthew Wolff,

With the 43rd Ryder Cup scheduled for September, captains Padraig Harrington of Europe and Steve Stricker of the United States will be keeping a close eye on what happens this week in New Orleans because there is at least a touch of match play involved.