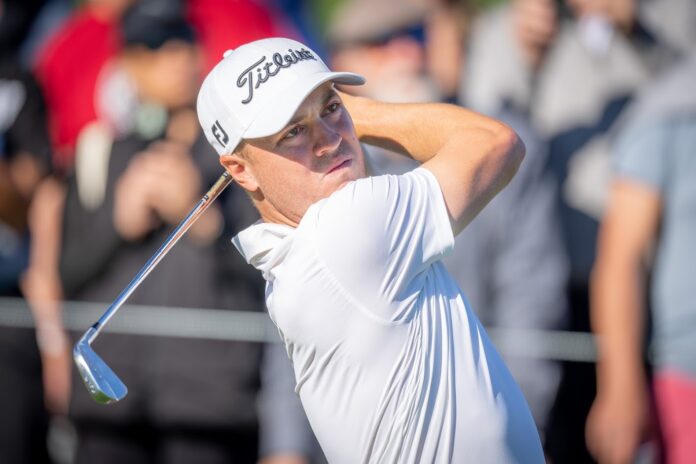 The PGA Tour has had a series of thrilling events already in the 2021-22 season and the biggest tournaments of the campaign still are ahead.

That starts this week with the 48th edition of the Players Championship, the so-called fifth major championship, on the famed Stadium Course at TPC Sawgrass in Ponte Vedra Beach, Fla., where it will be played for the 40th consecutive year.

The tournament was canceled after the first round in 2020 because of the Coronavirus pandemic.

Eighth-ranked Justin Thomas (pictured) will try to become the first back-to-back winner in Players Championship history against the strongest field of the season that includes 48 of the top 50 players in the World Golf Rankings.

“It means a lot to be The Players champion,” said Thomas, who has won 14 times in his PGA Tour career, including the 2017 PGA Championship. “It’s a huge championship and one that’s very special to all of us on the PGA Tour. It’s a tournament I’ve always wanted to win, and a tournament that I truly did feel like I was going to win at some point, and hopefully multiple times.

“It was great coming back here recently for a media day. I’ve been comfortable coming to TPC Sawgrass before I’d won, so this time, I was a lot more comfortable–especially being back in the Champions Locker Room, seeing my picture around the clubhouse and the energy from the place with just days until tournament time.

“People always wonder why it’s so hard to defend at The Players. Not having a repeat winner here has nothing to do with the golf course. It’s just really hard to win golf tournaments these days on the PGA Tour.”

Also in the field are the rest of the top-10 in the World Golf Rankings, including No. 1 Jon Rahm of Spain, second-ranked Collin Morikawa of La Canada Flintridge and Cal, third-ranked Viktor Hovland of Norway, fourth-ranked Patrick Cantlay of Los Alamitos and UCLA, and fifth-ranked Scottie Scheffler, who on Sunday won the Arnold Palmer Invitational for his second victory in three events.

The rest of the top 10 also will be there, including sixth-ranked Rory McIlroy of Northern Ireland, seventh-ranked Xander Schauffele of La Jolla and San Diego State, ninth-ranked Dustin Johnson and 10th-ranked Cameron Smith of Australia, in addition to 11th-ranked Hideki Matsuyama of Japan, who will defend his Masters title next month.

Bryson DeChambeau of Clovis, who has slipped to No. 12 in the world rankings and withdrew before the start of his title defense in the Arnold Palmer Invitational last week because of a lingering hand injury, was committed to play in The Players before withdrawing again on Monday.

Tiger Woods, who won the Players in 2001 and 2013 during his 20 appearances in the tournament, will not be in the field as he continues to recover from a leg injury sustained in an auto accident a year ago, but he will be around since he will be inducted to the nearby World Golf Hall of Fame on Wednesday.

The Players always is a special week, especially at the island green at No. 17, but Woods’ induction will make it even more so for the world of golf.

1. Justin Thomas, United States –The eighth-ranked Thomas shot 64-68 on the weekend last year to hold off Lee Westwood by one stroke to win The Players for the first time and now he will try to become the first player in the 46-year history of the tournament to win back-to-back. He also tied for third in 2016. JT has three top-10s and hasn’t been out of the top 20 in six events this season.

2. Viktor Hovland, Norway – Seemed to be headed for his fourth victory round the world in recent months before closing with a 74 to tie for second last week in the Arnold Palmer Invitational. The third-ranked Hovland also won at Mayakoba and tied for fourth in the Genesis Invitational this season on the PGA Tour. Shot 72-74 to miss the cut in his first Players last year.

3. Jon Rahm, Spain – The top-ranked player in the world hasn’t won since the 2021 U.S. Open on the South Course at Torrey Pines, but he finished second in the Sentry TOC, tied for third in the Farmers and tied for 10th in the WM Phoenix Open this season. Rahm posted his best finish in the Players Championship with a tie for ninth last year and also tied for 12th in 2019.

4. Collin Morikawa, United States – The second-ranked Morikawa, who has won the PGA Championship and the Open in the last two years, has four top-10 finishes on the PGA Tour this season, including a tie for second in the Genesis Invitational, solo second in the CJ Cup and a tie for fifth in the Sentry TOC. Tied for 41st in his Players debut last year, with a final-round 66.

5. Patrick Cantlay, United States – Ranked fourth in the world, Cantlay has four top-10 finishes on the PGA Tour this season, including second in the WM Phoenix Open, a tie for second in the WM Phoenix Open, solo fourth in the Sentry TOC and solo ninth in The American Express. He has missed the cut in his last two Players after tying for 22nd in 2017 and tying for 23rd in 2019.

6. Rory McIlroy, Northern Ireland – Rory, ranked sixth in the world, won the CJ Cup at the Summit early this season for his 20th PGA Tour victory and 29th as a pro, in addition to tying for 10th in the Genesis Invitational and tying for 13th in the Arnold Palmer Invitational. McIlroy won the 2019 Players by one shot over Jim Furyk and has four top-10 results at TPC Sawgrass.

7. Xander Schauffele, United States – The Olympic Gold Medalist, ranked seventh in the world, tied for third in the WM Phoenix Open this season, was 12th in the Sony TOC and tied for 13th in his last outing at the Genesis Invitational at Riviera. Schauffele closed with a 67 to tie for second in the 2018 Players Championship, but he missed the cut in 2019 and again last season.

8. Scottie Scheffler, United States – Has climbed to fifth in the World Golf Rankings by winning the Arnold Palmer Invitational and the WM Phoenix Open, taking the lead in the FedEx Cup point standings. Scheffler also tied for second in the Phoenix Open, was fourth at Mayakoba and tied for seventh in the Genesis. He shot 74-71 to miss the cut in his only Players last year.

9. Dustin Johnson, United States – The former top-ranked player in the world is searching for his game, with his best result in three starts this season a tie for 25th in the CJ Cup at the Summit. DJ did win the 2020 Masters and the 2021 Saudi International. His best result, and only top-10 finish in 12 appearances in The Players Championship was a tie for fifth in 2019.

10. Hideki Matsuyama, Japan – The reigning Masters champion hasn’t been at his best since winning the Sony Open in Hawaii and the CJ Cup at the Summit early this season, and has lost his lead to Scottie Scheffler in the FedEx Cup point standings. Matsuyama’s best results seven starts in The Players Championship were a tie for seventh in 2016 and a tie for eighth in 2019.

1. Cameron Young, United States – Making an early run for PGA Tour Rookie of the Year, Young was T-2 at Sanderson Farms and in the Genesis. Making his debut in the Players.

2. Lucas Herbert, Australia – Won the alternate field even in Bermuda, his third pro victory, and tied for seventh in Arnold Palmer Invitational. Also playing in The Players for the first time.

3. Mito Pereira, Chile — Seven-time winner as a pro on lower tours, he was third in Fortinet and T-15 in the Genesis this season. Another first-time participant in The Players Championship.

4. Maverick McNealy, United States – Former Stanford star was solo second in Fortinet, T-7 in the Genesis and T-11 at Mayakoba this season. Shot 80-77 to miss cut in The Players last season.