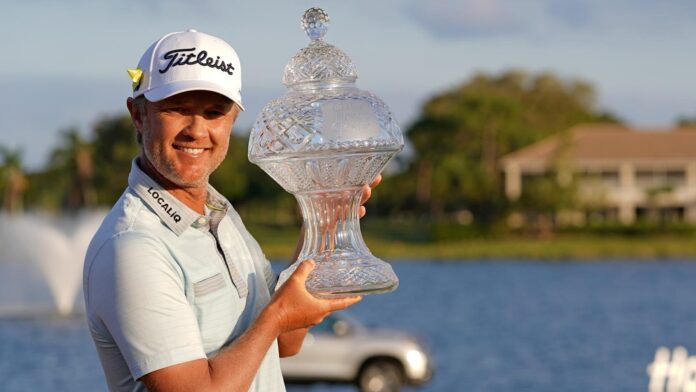 Greg Norman of Australia once said that the PGA Tour doesn’t really start until it gets to Florida, which happens this week.

By the way, has anyone heard from Norman lately?

The Arnold Palmer Invitational at Bay Hill Club and Lodge in Orlando is next week, with the Puerto Rico Open being held concurrently as an opposite field event at Grand Reserve Country Club in Rio Grande, P.R., followed by the Players Championship at TPC Sawgrass in Ponte Vedra Beach and the Valspar Championship on the Copperhead Course at Innisbrook Resort in Palm Harbor.

All of the top 10 players in the World Golf Rankings competed last week in the Genesis Invitational at Riviera Country in Pacific Palisades, and even though none of them are playing this week, The Honda Classic has a solid field.

Matt Jones of Australia (pictured) will defend his title after opening with a 9-under-par 61 last year and going on to claim his second victory on the PGA Tour by five strokes over Brandon Hagy of Santa Monica and the University of California.

“I think another 61 would be just fine,” said Jones, who also won the 2014 Shell Houston Open in a playoff over Matt Kuchar and visited the Copperhead Course recently. “It’s not easy to win out here. I’ve had a couple of chances, but they’re few and far between unless you’re the top guys, which they’re there regularly. But for me to close it out on this golf course was amazing and it’s something that I can always look back on.

“I’ve had ups, I’ve had downs, but to win a second time, on this golf course, in the conditions that we faced was phenomenal and hopefully it’s something I can build on. I mean, I really played amazing golf all four days. I didn’t make any real mistakes, which is what you need to do around here.

“The good thing about golf is you can miss the cut one week and win the next week. I’ll just say that winning on the PGA Tour is so, so tough.”

Although none of the top 10 in the World Golf Rankings are playing this week the field includes No. 13 Louis Oosthuizen of South Africa, No. 15 Brooks Koepka, No. 20 Joaquin Niemann of Chile, who won at Riviera last week, No. 21 Daniel Berger, No. 22 Billy Horschel, No. 24 Sungjae Im of South Korea and No. 28 Patrick Reed.

The PGA Tour is hoping they will continue what has been a sensational season to date.

1. Daniel Berger, United States – Has played sparingly early this season, but tied for fifth in the Senty Tournament of Champions and tied for 20th in the Farmers Insurance Open after claiming his fourth PGA Tour victory last season at Pebble Beach among eight top-10 finishes. Berger is making his seventh start in the Honda, losing in a playoff to Padraig Harrington in 2015 and tying for fourth last season.

2. Joaquin Nieman, Chile – Coming off his second PGA Tour victory last week by two strokes in the Genesis Invitational at Riviera Country Club, Niemann also has tied for fifth at World Wide Technology Championship at Mayakoba and tied for sixth in the Farmers Insurance Open this season. The 23-year-old is making his fourth start in the Honda and posted his best result when he tied for 25th last season.

3. Matt Jones, Australia – The defending champion in the Honda Classic shot 9-under-par 61 in the first round last year and won by five strokes over Brandon Hagy for his second PGA Tour victory, also winning the 2014 Shell Houston Open. He finished third in the Sentry TOC and tied for 15th last week in the Genesis Invitational. Jones has played the Honda Classic eight times and tied for fourth in 2008.

4. Brooks Koepka, United States – The former world No. 1 tied for third in the WM Phoenix Open two weeks ago, but he missed the cut for the fourth time this season last week in the Genesis Invitational. Koepka is playing in the Honda Classic for the seventh time and his best result was a tie for second in three years ago, when he closed with a 66 and wound up one stroke behind Keith Mitchell.

5. Shane Lowry, Ireland – The 2019 Open champion was in the hunt at the Abu Dhabi HSBC Championship recently before closing with a 77 to tie for 12th, and he also tied for 24th in the Dhabi Desert Classic on the DP World Tour. Lowry is making his fifth start in the Honda and best results were 21st in 2020 and a tie for 31st last year after being in the hunt before fading on the weekend both times.

6. Sungjae Im, South Korea – Playing almost every week, Im captured his second PGA Tour victory early this season in the Shriners Children’s Open, also tied for sixth in the Farmers Insurance Open and tied for ninth in the CJ Cup at the Summit. He claimed his first PGA title by closing with a 66 to beat Mackenzie Hughes of Canada in the 2020 Honda and tied for eighth in his title defense last season.

7. Louis Oosthuizen, South Africa – The 2010 Open champion at St. Andrews has finished in ties for 14th this season in the Shriners Children’s Open and the WM Phoenix Open despite being bothered by a back injury that caused him to withdraw from the RSM Classic after an opening 69. Oosthuizen is playing the Honda for the sixth time, and he tied for 21st in 2017 before tying 24th the following season.

8. Russell Knox, Scotland – A four-time winner as a pro, including twice on the PGA Tour, Knox tied for seventh in the Sony Open and tied for 12th in the Bermuda Championship this season. Opened with 68-67 last week in the Genesis at Riviera but played the weekend in 74-70 to tie for 33rd. He is making his eighth start in the Honda and lost in a playoff to Russell Henley in 2014 and tied for third the next year,

9. Stewart Cink, United States – Claimed his seventh and eighth PGA Tour victories last season in the Safeway Open last season but has cooled off a bit since. His best result this season was a tie for 21st in the Sentry Tournament of Champions, but he has posted three rounds in the 60s three times. Cink has played in the Honda 14 times and his best results were a tie for 12th in 1998 and tie for 19th last year.

10. Keith Mitchell, United States – Claimed his only PGA Tour victory in the 2019 Honda Classic, when he closed with a 67 to hold off Brooks Koepka, Rickie Fowler and Ryan Palmer to win by a single stroke. This season, Mitchell has tied for seventh in the Sony Open in Hawaii, tied for 10th in the WM Phoenix Open, and tied for 12th in both the RSM Classic and the AT&T Pebble Beach Pro-Am.

1. Mito Perreira, Chile – A seven-time winner on lower tours, Pereira was third in Fortinet Championship and T-15 in the Genesis last week. Making his debut in the Honda Classic.

2. Beau Hossler, United States – Hoss finished solo third in the AT&T Pebble Beach Pro-Am and was T-16 in the Fortinet Championship this season. He finished T-38 in the Honda Classic two seasons ago.

3. Garrick Higgo, South Africa – Seven-time winner around the world, Higgo was T-25 in Sentry TOC and T-21 in the WM Phoenix Open this season. He is making his debut in the Honda Classic this week.

5. Cameron Young, United States – Chased Joaquin Niemann to the finish last week before a T-2 at Riviera, also was T-2 at Sanderson Farms, T-20 in the Farmers. Making his debut in Honda Classic.