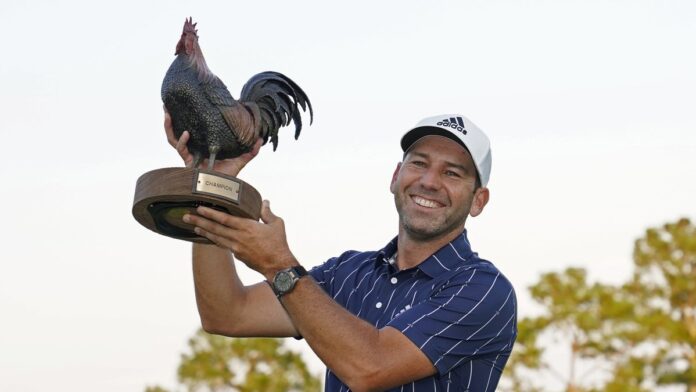 Sergio Garcia of Spain is the only player from the 43rd Ryder Cup to turn right around and play in the Sanderson Farms Championship, which starts on Thursday at the Country Club of Jackson in Jackson, Miss., and there’s a good reason for that—he is the defending champion.

Garcia, the 2017 Masters champion who has won 36 times as a professional, claimed his 11th PGA Tour victory at Jackson last year by holding off Peter Malnati by one stroke and has won on the circuit in three straight decades.

It was Garcia’s first victory on the PGA Tour since he won at Augusta.

“I’m excited to return to Jackson to defend my title at the Sanderson Farms Championship,” said the 41-year-old Garcia, who was one of the few bright spots for Europe in the Ryder Cup with a 3-1 record as the United States rolled to a 19-9 victory last weekend.

“It’s always an amazing feeling to go back to a place that you have had success, but it’s particularly special to go back to a course as amazing as the Country Club of Jackson. It’s a great golf course.

“I was believing in myself the whole week. It was great to show lot of what I still have, and what I still can do, and especially to win again.”

Garcia, who posted four scores of 67 or better, sank a three-foot birdie putt on the 72nd hole to edge Malnati, who closed with a bogey-free, 9-under-par 63.

It was the fourth straight year the 54-hole leader won the Sanderson Farms, but Garcia actually fell two strokes behind in the final round before he pulled even with Malnati by sinking a four-foot putt for eagle on the 14th hole.

“We are beyond excited that Sergio is coming back to compete, and that our fans are back this year to watch him defend in person,” said Steve Jent, executive director of the Sanderson Farms Championship.

“It will be fun to watch his game again, and we were crossing our fingers that he could arrange a return to Mississippi.”

This will be the 54th version of the tournament that started out as the Magnolia Classic in 1968.

1. Sergio Garcia, Spain – Sergio won the Sanderson Farms Championship last season in his tournament debut, shooting 68-68-66-67 to beat Peter Malnati by one stroke with a birdie on the final hole. Garcia finished the season strong, too, tying for sixth in the BMW Championship and tying for 14th in the Tour Championship before going 3-1 for Europe in the 43rd Ryder Cup.

2. Matthew Wolff, United States – His only PGA Tour victory came in the 2019 3M Open, but Wolff almost won again last season when he lost to Martin Laird of Scotland in a playoff at the Shriners after shooting 61 in round three. He led the 2020 U.S. Open after 54 holes before a  closing 75 left him second behind Bryson DeChambeau. Making his Sanderson Farms debut.

3. Sungjae Im, South Korea – Coming off a season in which he finished in the top 10 five times, including a tie for second in the Masters, Im is seeking his first victory since the 2020 Honda. He finished the season strong with a solo third in the BMW Championship and a tie for 20th in the Tour Championship. Makes fourth start in the Sanderson Farms and lost in a playoff in 2019.

4. Corey Conners, Canada – Posted eight results in the top 10 and 19 in the top 25 last season, including seventh in the Players Championship, a tie for eighth in the Masters and another tie for eighth in The Northern Trust to open the playoffs. Conners, who won the 2019 Valero Texas Open, makes his fifth start in the Sanderson Farms Championship and finished second in 2019.

5. Gary Woodland, United States – The 2019 U.S. Open champion struggled in the last two seasons after sustaining a torn labrum in his left hip, but showed signs he is on his way back by finishing fifth in the Wells Fargo, tying for sixth in the Valero Texas Open and tying for seventh in the Barracuda Championship last year. Woodland is making his Sanderson Farms debut.

6. Will Zalatoris, United States – The 2020-21 PGA Tour Rookie of the Year tied for 11th in the Fortinet Championship to start the new season after posting eight top-10 finishes last year, including second in the Masters, a tie for sixth in the 2020 U.S. Open and a tie for eighth in the PGA Championship. Zalatoris won the 2020 Colorado Championship on the Korn Ferry Tour.

7. Si-Woo Kim, South Korea – Started the new season two weeks ago with a tie for 11th in the Fortinet Championship after recording five top-10 finishes and his third PGA Tour victory in the 2021 American Express. Kim also won the 2016 Wyndham and the 2017 Players Championship. Making his fifth start in the Sanderson Farms and his best result was a tie for 37th last year.

8. Sam Burns, United States – Broke through for his first PGA Tour victory in the 2021 Valspar Championship and recorded eight finishes in the top 10, including second in the WGC-FedEx St. Jude and the AT&T Byron Nelson. Burns, who won the 2018 Savannah Championship on the Korn Ferry Tour, makes his fifth start in the Sanderson Farms and tied for third in 2018.

9. Sebastian Munoz, Colombia – A four-time winner as a pro, Munoz claimed his only PGA Tour victory when he beat Sungjae Im in a playoff at the 2019 Sanderson Farms, and he tied for 23rd in his title defense last year. Won three times on the PGA Latino America Tour early in his career, and last year tied for third in the Charles Schwab and tied for fourth in the John Deere.

10. Scott Stallings, United States – Got the new season off to a fast start when he tied for sixth in the Fortinet Championship two weeks ago. Stallings has won three times on the PGA Tour, but not since the 2014 Farmers Insurance Open. One of his victories came in the 2012 True South Classic, which is now the Sanderson Farms, and he also tied for sixth at Jackson last year.

1. Mito Pereira, Chile – Won three times on the 2020 Korn Ferry Tour to earn his promotion to the PGA Tour, and he started this season by finishing solo third in the Fortinet Championship.

4. Talor Gooch, United States – Winner of the 2017 News Sentinel Open on the Korn Ferry Tour finished T-4 in the Fortinet Championship and was T-14 in 2018 Sanderson Farms.

5. Taylor Pendrith, Canada – Two-time winner on the Forme Tour opened this season with a T-36 in the Fortinet Championship. T-11 in the Barbasol and T-13 in the Barracuda last season.