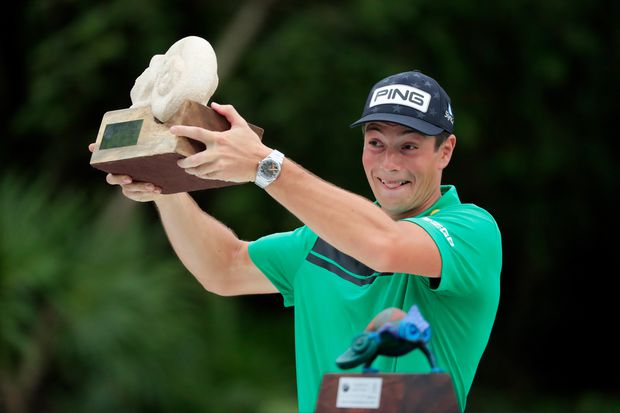 The PGA Tour concludes its three-event run outside the United States this week with the World Wide Technology Championship at Mayakoba at El Camaleon Golf Club in Riviera Maya, Mexico.

Viktor Hovland of Norway will defend his title after making three birdies on the last six holes, including an eight-foot birdie putt at No. 18 for a 6-under-par 65 that gave him a one-stroke victory over Aaron Wise, who closed with a 63.

“I don’t really feel like I’m very good at those pressure situations,” said Hovland (pictured), who has won twice on the PGA Tour, his first victory coming in the 2020 Puerto Rico Open.

“I was shaking there in the end—I thought I lost it after the second shot on 16 and made an awesome par there, but missed a putt on 17 and knew I needed to make birdie on 18, and it just happened to go in. Yeah, don’t feel comfortable in those moments at all.”

Hovland will try to become the first player to successfully defend his title at Mayakoba, where the tournament was first played in 2007 and won by Fred Funk.

“Since winning here last year, Viktor has had a wonderful season and has developed into one of the best young players in the world,” Tournament Director Joe Mazzeo said. “We are so proud of him and the way he has represented our event.

“This field is so exciting. With such a compelling mix of highly-ranked stars, both veteran and youth, it shapes up to be our best field ever. Beyond just being great players, there are some truly incredible personalities who will make for a fun and thrilling competition.

“It’s a wonderful way to welcome our new title Sponsor World Wide Technology and showcase what many in the game of golf have known for a long time now—that Mayakoba and this tournament are truly special.”

1. Justin Thomas, United States – The seventh-ranked Thomas tied for 18th in the CJ Cup in his only start of the new season, closing with a 64, after helping the U.S. regain the Ryder Cup. He claimed his 14th PGA victory in the Players last season among seven finishes in the top 10. JT tied for 12th last year at Mayakoba, shooting 62 in round three.

2. Viktor Hovland, Norway – The defending champion at Mayakoba, where he played the weekend in 63-65, has climbed to No. 17 in the world after a season in which he finished in the top 10 seven times, including two seconds, and in the top 25 on 14 occasions. Hovland missed the cut in his first two starts at Mayakoba. He recently tied for 18th the CJ Cup.

3. Brooks Koepka, United States – Former world No. 1 is trying to climb back into the top 10 after slipping to No. 13. Koepka battled injuries last year after winning the Phoenix Open, tying for second in the PGA Championship, tying for fourth in the U.S. Open and tying for sixth in the Open Championship. Helped the U.S. regain the Ryder Cup and tied for 38th in CJ Cup.

4. Patrick Reed, United States – Didn’t play his best golf last year after claiming his ninth PGA Tour victory early in the season at the Farmers Insurance Open, but suddenly seems to be back on track. Reed closed with a 65 last week to finish second, one stroke behind Lucas Herbert in the Bermuda Championship. He missed the cut in his only Mayakoba start in 2017.

5. Abraham Ancer, Mexico – Seems to enjoy playing before the home fans at Mayakoba, having tied for eighth in 2018, tied for ninth in 2017 and tied for 12th last year among his four finishes in the top 25. Ancer, up to No. 14 in the world rankings, tied for 14th in his last start in the CJ Cup at the Summit, shooting 65-63 in the middle rounds, but fell back by closing with a 71.

6. Matt Fitzpatrick, England – Coming off his seventh victory as a pro two weeks earlier in the Estrella Damm N.A. Andalucia Masters in Spain, the 26th-ranked Fitzpatrick tied for 30th last week in the Bermuda Championship. He’s still looking for his first win on the PGA Tour after finishing in the top 10 on 10 occasions the last two seasons. Making his Mayakoba debut.

7. Billy Horschel, United States – The 20th-ranked Horschel makes his debut in the new season after posting six top-10s, including his sixth PGA Tour victory in the WGC-Match Play, in 2020-21. He tied for ninth in the Tour Championship, also was T-9 in the final FedEx Cup standings. Making seventh start at Mayakoba, where he tied for fifth and tied for eighth the last two years.

8. Sergio Garcia, Spain – After claiming his 35th pro victory and 11th on the PGA Tour in the Sanderson Farms Championship early last season, Garcia finished the year strong by tying for sixth in the BMW Championship and tying for 14th in the Tour Championship. After missing the cut in his Sanderson Farms title defense, he tied for 25th in CJ Cup. Making his Mayakoba debut.

9. Tony Finau, United States – Having slipped out of the top 10 in the World Golf Rankings to No. 11, Finau will try to climb back in at Mayakoba, where he tied for eighth in the tournament last year, tied for seventh in 2016 and tied for 16th in 2018. He claimed his second PGA Tour victory in The Northern Trust during the 2020-21 playoffs and helped the U.S. reclaim the Ryder Cup.

10. Joaquin Niemann, Chile – The 22-year-old Niemann finished second three times on the PGA Tour last season, losing in playoffs twice, after claiming his first victory on the circuit in the 2020 Military Tribute at the Greenbrier. He is making his fourth start at Mayakoba and last year recorded his best finish with a tie for 23rd, opening with a 66 and closing with a 67.

2. Tom Hoge, United States – Has won three times on lower pro tours and this season was T-14 in Shriners Children’s Open, plus 17th in Zozo Championship. Posted four rounds in the 60s to T-3 last season at Mayakoba.

3. Stephan Jaeger, Germany – A six-time winner on the Korn Ferry Tour, Jaeger was T-26 at Sanderson Farms, T-20 at Bermuda Championship this season. Finished T-16 at Mayakoba last year with four scores in the 60s.

4. Mito Pereira, Chile – Pereira has won seven times on lower pro tours and started this season by finishing solo third in the Fortinet Championship after recording a T-4 in the Olympic Games. He is making his debut at Mayakoba.