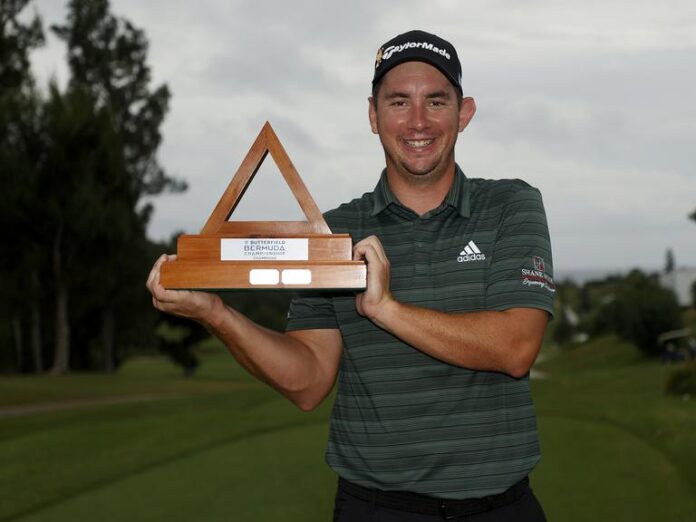 The 25-year-old Herbert claimed his first PGA Tour victory by one stroke over Patrick Reed and Danny Lee of New Zealand in the Butterfield Bermuda Championship with a closing 3-under-par 69 in rainy, windy conditions at Port Royal Golf Club in Southampton, Bermuda.

“I really like it when the conditions are difficult and it eliminates some of the guys who fight it,” said Herbert, who earned his PGA Tour card by finishing in the top 25 of the Korn Ferry Tour Finals in August. “And it was really tough out there, especially in the middle of the round. You have to be patient and wait for your chances to come.

“It seemed like our group juggled the lead all day, but I was able to make so many long putts, especially on Nos. 12 and 14 that really made a difference. I really enjoyed it out there today, it was fun, and I was able to play well and win.

“This really opens some big doors for me, being able to pick the tournaments I want to play in, plus getting the opportunity to play in so many big events.”

Herbert, who won the 2020 Omega Dubai Desert Classic and the 2021 Dubai Duty Free Irish Open on the European Tour, birdied two of the first three holes and added those birdies at Nos. 12 and 14 to go against two bogeys and posted a score of 15-under 269.

Reed, the highest-ranked player in the field at No. 24 in the world, birdied four of the last six holes to cap a 65, while Lee gave up the lead by playing holes 12 to 14 in 4-over and needed three late birdies to salvage a 71.

“The weather allowed me to be creative,” said Reed, who claimed his ninth PGA Tour victory in the Farmers Insurance Open early this year. “I was playing golf, not golf swing.

“I had eight penalty shots throughout the week and the big goal coming in today was no penalty shots, no doubles and to give yourself opportunities, looks for birdie. I felt like I did that really well today and I managed the conditions. The putter got going for me.”

Patrick Rodgers of Stanford made his only birdies on the 16th and 17th holes to shoot 70 and was two shots back in solo fourth, while Scott Stallings posted a brilliant, bogey-free 62 and was one more down in a tie for fifth with Taylor Pendrith of Canada, who took a three-stroke lead into the final round but did not make a birdie while struggling to a 76.

J.J. Spaun of Los Angeles and San Diego State closed with a bogey-free 68 and wound up four shots behind in a tie for seventh with Davis Riley, who made three late birdies for a 67, Curtis Thompson, who shot 70, Peter Malnati, who had a 71, and Vincent Whaley, who made two birdies coming home for a 72.

Defending champion Brian Gay holed out from the fairway for an eagle on the final hole to complete a 68 that left him in a tie for 12th, while Matt Fitzpatrick of England, who won his last time out two weeks ago in Spain, tied for 30th following a 72.