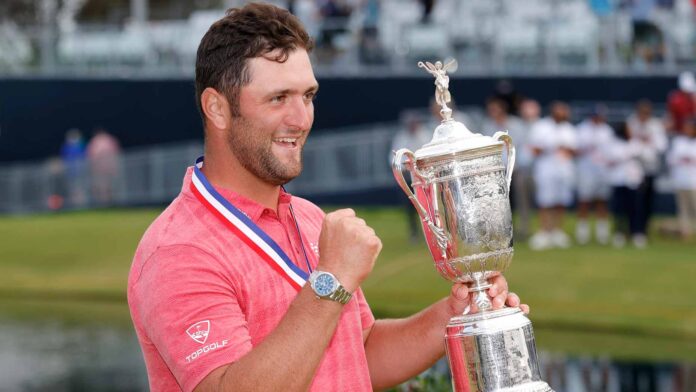 The PGA Tour’s West Coast Swing continues this week with the Farmers Insurance Open on the South and North Courses at Torrey Pines Golf Course in La Jolla, where the U.S. Open was played last year.

However, there might be no one who loves Torrey Pines more than top-ranked Jon Rahm of Spain.

The 27-year-old Rahm claimed the first of his six PGA Tour victories in the 2017 Farmers, when he punctuated his three-stroke victory with a 60-foot eagle bomb on the final hole, and he proposed to his wife, Kelley, atop one of the cliffs on the property overlooking the Pacific Ocean.

Of course, then Rahm sank long, curling birdie putts on the last two holes of the South Course to claim his first major victory last year in the U.S. Open.

“It’s like a home week,” said Rahm, who also finished second at the Farmers in 2020. “All the moments and memories my family has there, it feels like the crowd supports me and wants me to win. As my wife and I always say, it’s our favorite city in the world and there’s a reason why.

“That coastline reminds me of home (in Spain) quite a bit. The weather is similar to what I grew up in and again, it is a ball striker’s golf course. … It’s long. You have to hit it in the fairway. You have small greens. You’re not necessarily having short irons in, so tee to green, it’s a premium there which luckily is one of my strengths.

“So those are the reasons why I’ve been able to play constantly so good and with so much confidence at Torrey Pines.”

Rahm, who played college golf at Arizona State and lives in Scottsdale, Ariz., has won 13 times around the world after claiming 17 victories as an amateur.

However, he seemed a big surprised to win the Farmers in his first season on the PGA Tour.

“It’s not a place where a rookie usually wins, PGA Tour rookie or first time (Farmers) player,” said Rahm, who has finished seventh or better in four his five Farmers starts. “To not just win but to get it done the way I did and stuff like that with two eagles on the back nine the way Tiger (Woods) did when he won (the 2008 U.S. Open).

“It was a miraculous back nine from thirteen and in. That gave me so much confidence and you could not script a better finish than that. I thought I had a chance, I never thought I was actually going to finish and win by more than one.”

Rahm would like to join Woods, who has won this tournament a record seven times, Phil Mickleson, who has claimed the title three times, Arnold Palmer, Tom Watson, Tommy Bolt, J.C Snead, Steve Pate, Brandt Snedeker and Jason Day of Australia as the only multiple winners of the Farmers—which started out as the San Diego Open in 1952.

As comfortable as Rahm is at Torrey Pines, it’s probably not wise to bet against him

1. Jon Rahm, Spain – Not only did the top-ranked Rahm win this event in 2017 in a playoff over Andrew Landry, he captured the U.S. Open at Torrey Pines last year with brilliant birdie putts on the last two holes, and proposed to his wife, Kelley, on a cliff overlooking the Pacific Ocean. He started 2022 with a solo second in the Sentry TOC and tied for 14th in The American Express.

2. Justin Thomas, United States – The sixth-ranked Thomas has started this season with a solo third at Mayakoba, a tie for fifth in the Sentry TOC and a tie for 18th in the CJ Cup at the Summit. He is playing in the Farmers for the third time and tied for 10th in 2014, but missed the cut the following year, and then tied for 19th in the U.S. Open at Torrey Pines last season.

3. Xander Schauffele, United States – Having grown up in La Jolla, the seventh-ranked Schauffele surprisingly did not play well in the Farmers until he tied for second last year, although he also tied for 25th in 2019, and tied for seventh in the 2021 U.S. Open. This season, the Olympic Gold Medalist was solo 12th in the Sentry TOC and tied for 18th in the CJ Cup.

4. Francesco Molinari, Italy – Coming off a tie for sixth in The American Express after carding four rounds in the 60s, the 2018 Open champion seems to be back on top of his game after not playing much in the last couple seasons. Molinari has played in the Farmers five times, with his best results a tie for 10th last season and a tie for 14th in 2017. Tied for 13th in 2021 U.S. Open.

5. Bryson DeChambeau, United States – The ninth-ranked DeChambeau returns after withdrawing before the Sony Open in Hawaii two weeks ago because of a wrist injury following a tie for 25th in his first start of the season in the Sentry TOC. He missed the cut at the Farmers in his only two starts in 2017 and 2018, and tied for 26th in the 2021 U.S. Open at Torrey.

6. Hideki Matsuyama, South Korea – The reigning Masters champion is the FedEx Cup points leader early this season as the only two-time champion, having won the Zozo Championship at home in Japan and the Sony Open in Hawaii, in addition to tying for sixth in the Fortinet Championship. Matsuyama’s best result in eight starts in the Farmers was a tie for third in 2019.

7. Dustin Johnson, United States – Having slid to No. 4 in the world rankings after not winning last year on the PGA Tour for the first time since 2014, DJ is trying to get back on track in the Farmers, where his only top-10 finish in nine starts was a tie for third in 2011. Johnson was in the chase last year in the U.S. Open at Torrey Pines before closing with a 74 to tie for 19th.

8. Marc Leishman, Australia – Not only has Leishman posted three top-10 finishes early this season with a tie for third in the Shriners Children’s Open, a tie for fourth in the Fortinet Championship and a tie for 10th in the Sentry TOC, he played well in the Farmers in the past. He won the tournament in 2020, tied for second in 2010 and 2014, and tied for eight in 2018.

9. Brandt Snedeker, United States – One of nine multiple winners in the Farmers Insurance Open, Snedeker has six top-10 finishes in the tournament other than his victories in 2012 and 2016, having tied for second in 2010 and 2013, plus a solo third in 2007. Sneds, who has won nine times on the PGA Tour, is coming off a tie for 14th last week in The American Express.

10. Patrick Reed, United States – The defending champion in the Farmers, winning by five strokes last year, has finished in the top 25 in each of his last four starts in the tournament, including a tie for sixth in 2020. Reed’s best result this season was a tie for second in the Bermuda Championship and he also tied for 15th in the Sony Tournament of Champions.

2. Paul Barjon, France – A four-time winner as a pro, three on the PGA Tour Canada, Barjon finished solo 10th in the American Express last week. He’s making his debut in the Farmers.