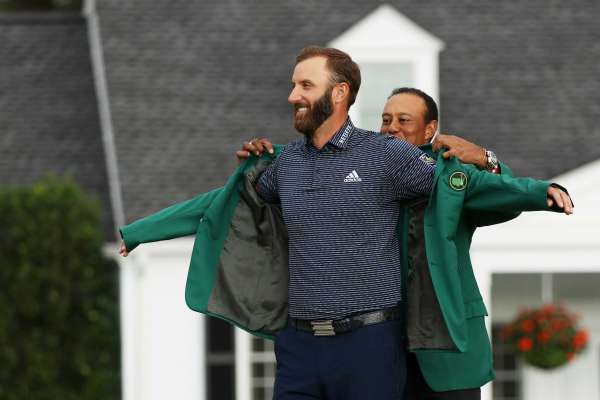 Top-ranked Dustin Johnson didn’t get out of Group Play in the WGC-Dell Technologies Match Play and withdrew from the Valero Texas Open recently, but he still is favored to defend his title in the 85th Masters, which begins Thursday.

DJ claimed his second major title last November, after the traditional first PGA Tour major of the year was postponed by the Coronavirus pandemic.

Johnson shot 68 in the final round to set the tournament scoring record at 20-under-par 268 while claiming a five-stroke victory over Sungjae Im of South Korea and Cameron Smith of Australia.

It doesn’t bother Johnson that he’s only had the Green Jacket, given to the winner of the Masters, for only five months.

“It wouldn’t bother me if I only had it for a day,” said Johnson, who will attempt to become the fourth player to win the Masters in consecutive years. “It’s incredible. It’s something I dreamed of as a kid. It has just been an amazing experience.

“ … In November, the greens were soft. You could be a lot more aggressive with longer clubs. They would stop and hold the greens. I felt like I was in complete control of the golf ball the whole week. I was super focused all week and knew exactly what I was going to do and was able to execute.

“I’d imagine it’s going to be pretty firm and fast. It’s definitely not going to be as soft as it was. You’re going to have to be able to land the ball in different spots. It looks like it’s shaping up to be a normal Masters.”

Five-time Masters champion Tiger Woods, who won in 2019 and put the Green Jacket on Johnson, will not play as he continues to recover from a car accident in California last month.

Fred Ridley, Chairman of Augusta National Golf Club in Augusta, Ga., has said that the famed course which has hosted the Masters since its inception in 1934, will allow a limited number of fans on the course.

Those on the property will be required to wear facemasks and that other health and safety standards will be in place.

“Following the successful conduct of the Masters Tournament last November with only essential personnel, we are confident in our ability to responsibly invite a limited number of patrons to Augusta National,” Ridley said. “As with the November Masters, we will implement practices and policies that will protect the health and safety of everyone in attendance.

“Nothing is, or will be, more important than the well-being of all involved. While we are disappointed that we will be unable to accommodate a full complement of patrons this year, we will continue our efforts to ensure that all who purchased tickets from Augusta National will have access in 2022, provided conditions improve.”

Rory McIlroy of Northern Ireland will make his seventh attempt to join Gene Sarazen, Ben Hogan, Gary Player, Jack Nicklaus and Woods as the only players to complete the Career Grand Slam by winning the Masters.

McIlroy, whose fourth and last major victory came in the 2014 PGA Championship, has been close at Augusta, finishing fourth in 2015, tying for 10th in 2016, tying for seventh in 2017, tying for fifth in 2018 and tying for fifth again last year.

Even though Rory has been struggling a bit, could this be his year?