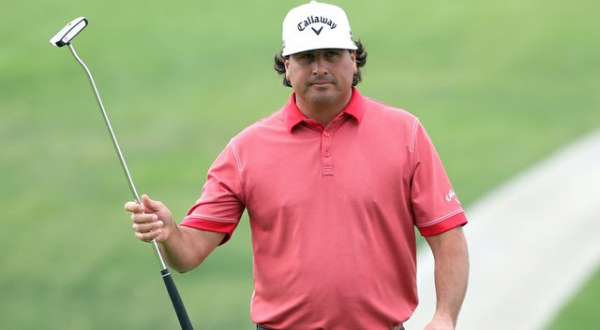 Pat Perez holed a 20-foot birdie putt on his final hole to card a 3-under-par 68 and tied for the lead after one round of the Valspar Championship with Matt Every, Greg Chalmers of Australia and Danny Lee of New Zealand in chilly, windy conditions on the Copperhead Course at Innisbrook Resort in Palm Harbor, Fla.

Perez, from San Diego and Arizona State, claimed his only PGA Tour victory in the 2009 Bob Hope Classic.

“I knew it was going to be brutal this morning,” said Perez, who sank a six-foot birdie putt on the first hole and then recorded seven consecutive pars before finishing with a birdie at No. 9. “We got lucky with the later tee time. We got some good weather and I was able to take advantage of some of the harder holes.”

Every, whose only victory as a pro came in the 2009 Nationwide Tour Championship, birdied three of his last four holes while finishing on the front nine.

Chalmers, who has nine pro victories but none on the PGA Tour, had three birdies in a span of six holes, also while finishing on the front nine.

The 23-year-old Lee, who captured the 2009 Johnnie Walker Classic on the European Tour as an amateur and added the 2011 WNB Classic on the Nationwide Tour after turning pro, held the lead until making his only bogey of the day at No. 6 as he also finished on the front side.

Michael Putnam, who played at Pepperdine, birdied three of his first five holes and posted a 69 to tie for fifth with Robert Garrigus, James Hahn, Bill Haas, Tommy Gainey, Nicolas Colsaerts of Belgium and Matteo Manassero of Italy.

Justin Rose of England, the highest ranked player in the field at No. 7 in the world, shot 71 and was in a tie for 26th that included Jordan Spieth, No. 13 and the 2013 PGA Tour Rookie of the year, and Jim Furyk, who won on the Copperhead Course in 2010.

Defending champion Kevin Streelman opened with a 73 and was in a tie for 70th that included Matt Kuchar, ranked No. 11 in the world.