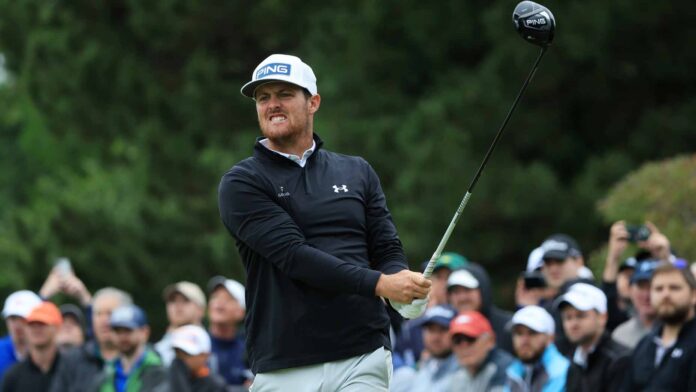 Mito Pereira of Chile, playing in his second major championship, is in position to win it.

The 27-year-old Pereira shot 1-under-par 69 in cold, windy and rainy conditions and will take a three-stroke lead over Matt Fitzpatrick of England and Will Zalatoris to the final round of the 104th PGA Championship at Southern Hills Country Club in Tulsa, Okla.

“I was playing really good and suddenly I made four bogeys in five holes. It was a tough place to be at that moment. But I just found myself from No. 13 on. Those holes are pretty tough. So I’m really happy how I ended up playing. The birdie on No. 18 was a bonus.

“I’m just happy to be in this position.”

Pereira, who played college golf at Texas Tech, rallied after making those four birdies in five holes through No. 12 with three birdies down the stretch including a 27-foot putt on the last hole, to record a 54-hole total of 9-under, 201.

Zalatoris, the 36 hole leader 66-65, made two late birdies to salvage a 73, while Fitzpatrick made three birdies on each nine in his 67.

“I would rather have a frustrating start and good finish,” said Zalatoris, the 2020-21 PGA Tour Rookie of the Year who also is seeking his first PGA Tour victory. “It’s good momentum heading into tomorrow even though it was brutal, out there.

“I’ve got nothing to lose. I know Mito played an incredible round today. You’ve got to go out and get it. Everybody’s got to go out and earn it. Keep doing what I’m doing and hopefully it adds up to the lowest score.

“I know I’m playing some really good golf, and hopefully at the end of the day it adds up to the lower score.”

Fitzpatrick, who has won seven times as a pro and is trying to become the first Englishman to win the PGA since Jim Barnes in 1919: “My driving has been a good strength in the last year and putting has always been a strength of mine.

“We made changes with my short game and my irons in the winter. So far, I feel like they have paid off. I think the big thing for me is my results showed that, but I feel it in my game as well. I feel like I can hit the shots way want to see and so far, it’s been a good year.”

Rookie Cameron Young sank a 24-foot eagle putt on the 17th hole in a second straight 67 and is four shots back in solo fourth, followed one more down by Abraham Ancer of Mexico, who made a 10-foot birdie putt at No. 17 in a 70, and Seamus Power of Ireland is one more behind in sixth after making four birdies on the back nine in a 67.

Ninth-ranked Justin Thomas made three bogeys on the back nine while struggling to a 74 and is seven strokes back in a tie for seventh with Stewart Cink, who had two birdies down the stretch in a 71, and Bubba Watson, who made bogeys on three of the last four holes to cap a 73.

Third-ranked Collin Morikawa of La Canada Flintridge and Cal made a late double-bogey 6 to card a 74 and is in a tie for 65th that includes second-ranked Jon Rahm of Spain, who had six bogeys and no bogeys in an ugly 76.

Tiger Woods, who claimed one of his 15 major titles in the 2007 PGA at Southern Hills, struggled to a 79 while limping on his ailing right leg, and withdrew from the tournament after his round.