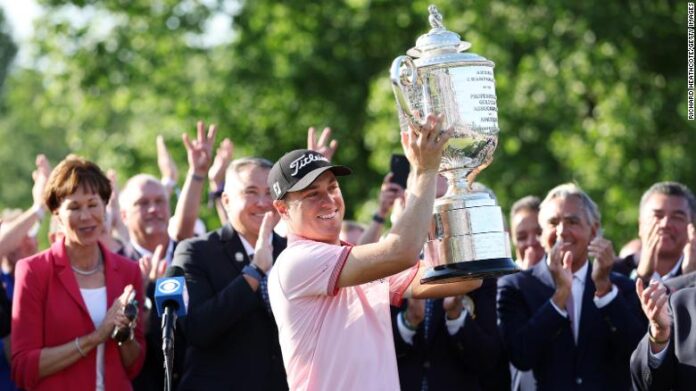 Justin Thomas simply outlasted everybody, including Will Zalatoris at the end.

The 29-year-old Thomas made a three-foot birdie putt on the second hole of a three-hole aggregate playoff to beat Will Zalatoris and captured the 104th PGA Championship at Southern Hills Country Club in Tulsa, Okla.

“I was asked early in the week what lead is safe and I said, ‘No lead,’” said Thomas, who claimed his second major championship, also having won the 2017 PGA at Quail Hollow Club in Charlotte, N.C., and rose to No. 5 in the world. “I can’t believe I found myself in a playoff.

“It was a bizarre day. I have definitely crossed one off the list I have never won a tournament after shanking a ball on Sunday, so that was the first and I would really like it to be the last. Bones (Thomas’ caddie, Jim Mackay) did an unbelievable job of just keeping me in the moment and I just tried to play the golf course for what it is.

“This place is so tough. If you hit the fairways you can make birdies and I stayed so patient. I could not believe that I found myself in a playoff. I was jittery and almost couldn’t feel my limbs walking up to that last tap-in (on the third playoff hole). Although trying to two-putt from 25 feet is usually pretty doable, but downhill when you’ve got to two-putt to win, I was very pleased to see it end up that close.”

Thomas, who started the final round seven strokes behind, was even par for the day through nine holes before making three birdies on the back nine to cap a 3-under-par 67 and was the leader in the clubhouse with a 72-hole score of 5-under 275.

Zalatoris, the 2021 PGA Tour Rookie of the Year, sank an eight-foot birdie putt on the 17th hole to tie Thomas, for the clubhouse lead, but Mito Pereira of Chile held a one-stroke lead heading to the final hole but hit his tee shot into the water en route to a double-bogey 6 and his 75 left him one stroke back in a tie for third with rookie Cameron Young, who mad a double-bogey 6 at No. 16 and shot 71.

“Obviously, it’s sad to be here and not in the playoff, not make par, just straight win,” said Pereira, a has won eight times as a pro but was playing in only his second major. “On 18, I wasn’t even thinking about the water. I just wanted to put it in play and I guess I aimed too far right.

“It’s not how I wanted this week to end up, but it was a really good result. I played really good golf. Today, I was really nervous. I thought I was going to win on 18 but … we’ll have another chance.”

Said Zalatoris, who matched Thomas’ birdie on the first extra hole before making a par and being in position for another par on the third extra hole: “I can do it. Obviously, I’m pretty close. I didn’t have my best stuff (on Saturday when he shot 73), which ultimately was kind of the difference. I battled like crazy today. I’m close and I’m super motivated, but we’ll get one soon.”

Tommy Fleetwood of England birdied five holes on the back nine in a 67 to wind up two shots back in a tie for fifth with who chipped in from 35 feet for an eagle on the 17th hole to highlight at 68, and Matt Fitzpatrick of England, who made three bogeys on the back nine while struggling to a 73.

Eight-ranked Rory McIlroy, who led after a first-round 65, made four straight birdies through No. 5 was three down in solo eighth after a 68, while Brendan Steele of Idyllwild and UC Riverside made four birdies on the back nine in the 68 to tie for ninth with Tom Hoge, who made a late birdie for 69, Seamus Power of Ireland, who finished at 72, and Abraham Ancer of Mexico, who came in at 73.

No. 13 Cameron Smith of Australia finished at 69 and was in a tie for 13th that included Olympic Gold Medalist Xander Schauffele of La Jolla and San Diego State, 10th-ranked Sam Burns had a 72 to tie for 20th, ninth-ranked Jordan Spieth tied for 34th after a 69, seventh-ranked Viktor Hovland of Norway shot 70 to tie for 41st, second-ranked Jon Rahm of Spain tied for 48th after a 68, and fourth-ranked Collin Morikawa of La Canada Flintridge and Cal closed with a 70 to tie for 55th.