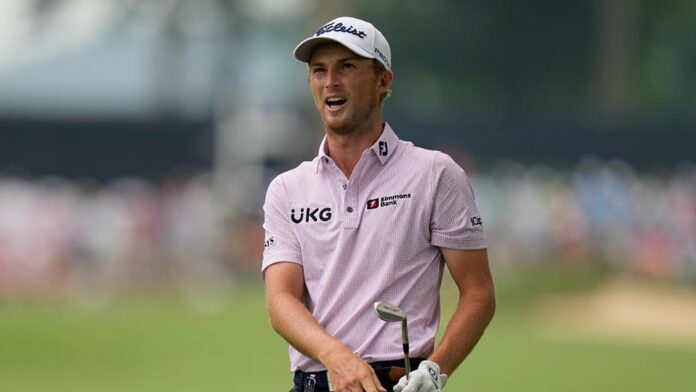 Will Zalatoris was Rookie of the Year on the PGA Tour in 2020-21, but he is still looking for his first victory on the circuit and this week would be a great time for it.

The 25-year-old Zalatoris, who was born in San Francisco, shot a bogey-free, 5-under 65 to take a one-shot lead over Mito Pereira of Chile midway through the 104th PGA Championship at Southern Hills Country Club in Tulsa, Okla.

“I lucked out with the draw, for sure,” said Zalatoris, who played when the wind died down in the afternoon. “We played from No. 11 on without any wind. When I got out of position, I was able to get the most out of it. I didn’t think it was going to calm down this much. A day like this afternoon is pretty rare for us, to be honest.

“I got away with murder a few times today for sure, especially starting off the day hitting the left trees and hitting it to a kick-in. Same thing on 17, being able to get out of there with birdie where it was looking like I was going to be making 5.

“I just kept the round going today. Made a bunch of six- and eight-footers for par, and obviously being bogey free around this place is pretty nice.”

Zalatoris, who won the 2020 TPC Colorado Championship on the Korn Ferry Tour, collected four birdies on the back nine including three in a row through No. 13, and recorded a 36-hole total of 9-under 131.

Pereira, who has eight pro victories including three on the Korn Ferry Tour, made seven birdies in a 67, while ninth-ranked-ranked Justin Thomas carded a second straight 67 and is three shots back in solo third, and Bubba Watson had eight birdies in a 63 and is four down in solo fourth.

“Yeah, it was lucky to get that draw (in the afternoon),” said Pereira, who has won eight times as a pro, including three on the Korn Ferry Tour. “Sometimes you get the bad draw, sometimes the good one. But today, for sure, there was almost no wind on the back nine. Just lucky to have that draw.”

Seventh-ranked Rory McIlroy of Northern Ireland, the first-round leader at 6, shot 71 and is five strokes behind in a tie for fifth with Davis Riley, who had a 68, and Abraham Ancer of Mexico, who made three birdies and finished with 10 straight pars in 69.

Stewart Cink wound up at 68 and is six down in a tie for eighth with Matt Fitzpatrick of England, who had only one bogey in a 69, while rookie Cameron Young carded a bogey-free 67 and is seven strokes behind in a tie for 10th with Sam Burns, who also shot 67, Tyrrell Hatton of England and Gary Woodland, who both had 68s,  Chris Kirk and Cameron Smith, who both finished at 70, and Matt Kuchar, who came in at 71.

Sixth-ranked Viktor Hovland of Norway is tied for 23rd at 70, while eighth-ranked Jordan Spieth carded a 69 and is in a tie for 30th that includes 10th-ranked Xander Schauffele of La Jolla and San Diego State, who made bogeys on three of the last four holes for a 73, and second-ranked Jon Rahm of Spain, who had a 69.

Third-ranked Collin Morikawa of La Canada Flintridge and Cal finished with two straight bogeys for a second straight 72 and made the cut on the number in a tie for 64th along with 2021 Masters champion Hideki Matsuyama, who also had two straight 72s.

Tiger Woods, the 15-time major champion who won the 2007 PGA Championship at Southern Hills, followed his opening 74 with a 69 and is tied for 53rd.