Pampling stays in lead by one shot in Las Vegas 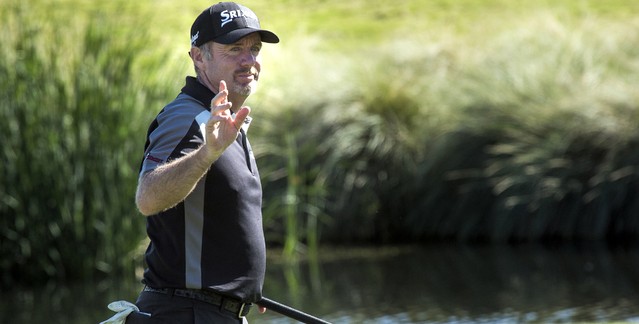 Rod Pampling’s score of 3-under-par 68 in the second round was eight shots worse than his total the day before, but he still held a one-stroke lead over Brooks Koepka in the Shriners Hospitals for Children Open at TPC Summerlin in Las Vegas.

The 47-year-old Aussie bounced back from two early bogeys with five birdies on his last eight holes and finished 36 holes at 14-under 128.

“The hole looked really big yesterday,” said Pampling, who has won twice on the PGA Tour, the last time in 2006 at what is now the Arnold Palmer Invitational. “I started out today and I didn’t think they’d cut them (the greens) early on.

“I changed ball markers and I knew I was playing good, so I just kind of threw out a new vibe, and it started to work. I knew it wasn’t bad, it’s just like it happened, so just let it go. Corrected myself and played nice after that.”

Koepka, whose only PGA Tour victory came in the 2015 Waste Management Phoenix Open, holed eagle putts of 16 feet on the ninth hole and 33 feet on the 15th, but three-putted from 70 feet on the last hole to fall out of a tie for the lead with a 67.

Rookie Aaron Wise of Lake Elsinore, the 2016 NCAA champion for Oregon, also had two eagles and was 7-under for the day after 12 holes and two strokes back when darkness halted play, while Chris Kirk was another shot behind in fourth after a 65.

James Hahn of Alameda and Cal birdied four holes in a row late in a 66 and was four back in a tie for fifth with Pat Perez of San Diego, who eagled the 16th in his second 66, Keegan Bradley, who had a bogey-free 65.

Left-hander Brian Harman collected 10 birdies and posted a 63 despite a double-bogey 6 on the 12th hole and was five down in a tie for eighth with Lucas Glover, who finished at 65, Sean O’Hair, who had a bogey-free 66, and Matt Jones of Australia, who came in at 68.