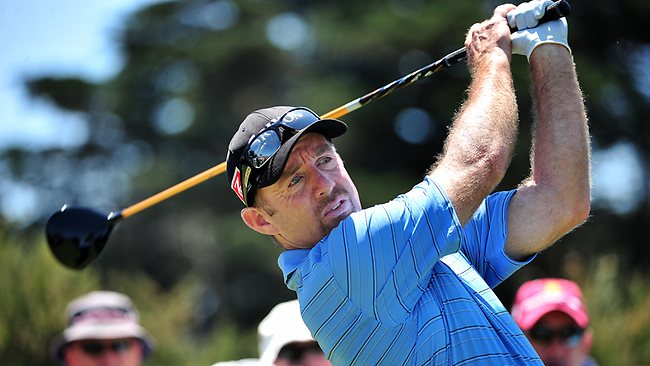 Rod Pampling of Australia had two chances to shoot 12-under-par 59 in the first round of the Shriners Hospitals for Children Open at TPC Summerlin in Las Vegas.

The 47-year-old Pampling left his 21-foot birdie putt barely short on the 17th hole and then watched in disbelief as his 12-footer for birdie slid right on the 18th, but his 60 left him with a two-stroke lead over Brooks Koepka and John Huh.

“When I hit it close on 16, that got my attention as to this is a really good round,” said Pampling, a two-time winner on the PGA Tour who had two eagles and seven birdies in his round. “The putt on 17 just fell short in the jaws and on 18 I gave myself a bad read. I thought it was straight, but it just had that little left-to-right. I would have loved to have made one for a 59, but it was just a good solid day all around.

“I studied the last hole a lot, and I looked at the book–all these new books have the slopes and everything in it. I was looking at it and making sure I was spot-on. My eyes were telling me it was pretty straight. But I hit it straight. It was on line when it started. It just had a little tail on it. So I’m glad I gave it a chance. It didn’t come up short, so it was a decent putt. I just picked a bad line.”

Huh, who played at Cal State Northridge, birdied five straight holes through No. 17 after starting on the back nine in his bogey-free 62, while Koepka birdied his last two holes while equaling that score.

Billy Horschel had three consecutive birdies early in a 64 and was in solo fourth, while Matt Jones of Australia birdied four of the last five holes in a 65 and was tied for fifth with Luke List, who holed a 46-foot eagle putt on the 15th hole.

Rookie Aaron Wise of Lake Elsinore, who won the 2016 NCAA individual championship for Oregon, sank a 24-foot eagle putt on the 16th hole in a 66 that left him tied for seventh with Shawn Stefani, John Senden of Australia, Cheng Tsung Pan of Taiwan, Chris Kirk and Cameron Smith of Australia.