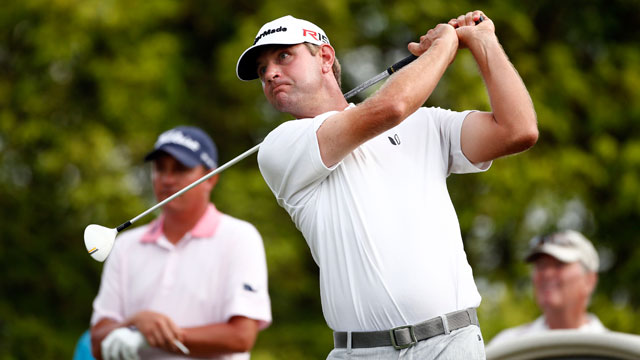 Lucas Glover started slowly and then he figured out that the greens at TPC Summerlin were not quite as fast as they were earlier in the week.

Glover finished the front nine with birdie-eagle on his way to a second straight 6-under-par 65 on Saturday and took a one-stroke lead over Rod Pampling of Australia and Brooks Koepka heading to the final round of the Shriners Hospitals for Children Open in Las Vegas.

“It was kind of slow, but I finally got the speed right,” said Glover, the 2009 U.S. Open champion who sank a 44-foot birdie putt on No. 8 and closed out the front nine with a nine-foot eagle putt.

“No. 8 was the one that got me going and then I hit two great shots on the ninth hole. I was even par through seven holes before I made that long one and then it was nice that I was able to keep it going.”

Pampling, who opened with a 60 led after each of the first two rounds, didn’t have his best stuff but gutted out a 71, getting back to even par for the day with a four-foot birdie putt on the 13th hole before finishing with five straight pars.

Koepka had a roller coaster day with three bogeys in the first five holes, but made five birdies on the next 10 holes to tie Glover for the lead before hitting his tee shot into the water at No. 17 en route to a double-bogey 5.

Then he sank a four-foot birdie putt to cap a 70.

“I hit a bad shot, a pull draw, on No. 17,” said Koepka, whose only victory came in the 2015 Waste Management Phoenix Open. “I was up-and-down all day with my ball-striking.

“But 1-under, it could have been worse, and I’m happy to be only one back and still have a chance.”

Russell Henley posted a bogey-free 63 that was the low round of the day and was two shots behind in a tie for fourth with Geoff Ogilvy of Australia, who birdied four straight holes through No. 17 on his way to a 66.

“The front nine is tricky, but the course gets easier after that,” said Ogilvy, the 2006 U.S. Open champ. “I had some good looks at birdie and made some, had a good finish.”

Scott Piercy, who lives in Las Vegas, thrilled the home crowd with a 65 that left him three behind in a tie for sixth with Harris English, Adam Hadwin of Canada and Charles Howell III, who all had 67s, and Pat Perez of San Diego and James Hahn of Alameda and Cal, who both came in at 69.