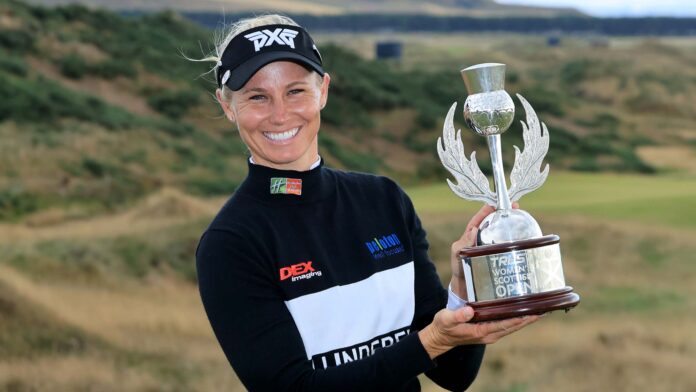 Ryann O’Toole of San Clemente claimed her first LPGA Tour victory in 228 starts, closing with a bogey-free, 8-under 64 to win the Trust Golf Women’s Scottish Open by three strokes over ninth-ranked Lydia Ko of New Zealand and Atthaya Thitikul of Thailand at Dunbarnie Links in Fife, Scotland.

The 34-year-old O’Toole, who played at UCLA, was showered with champagne and greeted with a kiss by her fiancee, Gina Marra, after putting out on the final hole.

“I still feel like I’m in shock and the tears are going to come later when things die down,” said O’Toole, who won three times on the Futures Tour years ago. “I’m excited and happy. The hours and grind and heartache this sport brings, the constant travel, for this moment, I hope it only happens again and again. I can’t even describe it. I’ve been dreaming of this since I was a kid. I just can’t believe it and hope that somehow it happens again.

“I tried not to look at the leaderboard. I tried to just trust in my caddie to guide me to whether we needed to lay or get aggressive, stay patient or whatnot. It wasn’t until 18 that I saw that Lydia was not far off and I could tell when I made the birdie on 17 that there must have been some sort of gap because people were cheering, and I was like, ‘OK, clearly I can’t mess this up too badly now.’”

O’Toole, who started the day tied for the lead and had not won since the 2011 Santorini Riviera Nayarit Classic on the Futures Four, collected five birdies on the front nine and three more coming home to finish at 17-under 271.

Ko, who has won 16 times on the LPGA Tour including two majors and claimed the Bronze Medal recently in the Olympic Games, eagled the 17th hole in a bogey-free, course-record 63, while Thitikul collected eight birdies in her 66.

“I putted pretty well today and hit a pretty solid round today, 6-under, but it’s not enough for the win,” said Thitikul, who has won three times on the Ladies European Tour. “I just know that I tried my best and I’m proud of myself already.”

Said Ko: “I actually haven’t played well at the Scottish Open before, so it’s definitely nice to finish on a high. I hit the ball well on the first day and I couldn’t really hole anything, and today holed a few putts and made a few good up-and-downs. I was just trusting it and all day, like I thought on the last day of the Olympics, thought ‘what is meant to be is going to be.’

“Having a good finish here, hopefully that gives me good momentum into next week (for the Women’s British Open at Carnoustie.”)

Ariya Jutanugarn of Thailand, who was tied for the lead starting the final round, eagled the second hole in a 68 and was four strokes back in fourth, while Charley Hull of England, who also had a share of the lead after 54 holes, also eagled the second in a fourth straight 69 and was five behind in fifth, while Ally Ewing was one more down in sixth after a 63 that included at eagle at No. 17.

Yealimi Noh of Concord birdied four of the first seven holes en route to a 68 and was eight down in a tie for seventh with Esther Henseleit of Germany and Jeonjeun Lee6 of South Korea, who both shot 66, Celine Boutier of France and Marina Alex, who both wound up at 68.

Eighth-ranked Yuka Saso of Japan tied for 15th after a 68.