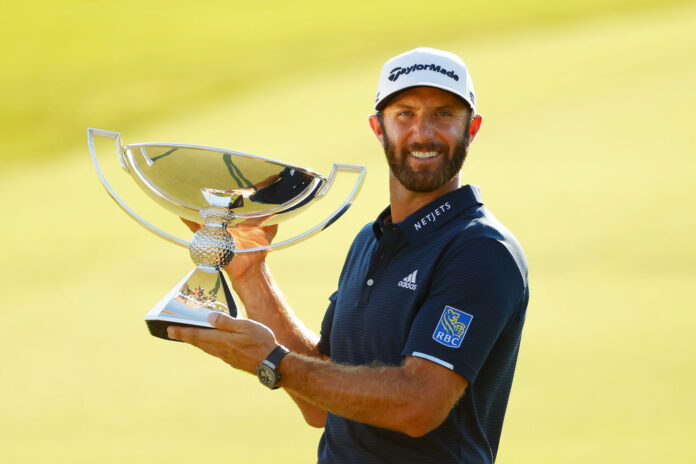 Second-ranked Dustin Johnson has played only average golf, for him, in 2021 or he would be an overwhelming choice to successfully defend his title in the 15th edition of the FedEx Cup Playoffs that begin Thursday with The Northern Trust at Liberty National Golf Club in Jersey City, N.J.

DJ played the last three rounds in 61-64-63 to win The Northern Trust for the third time by 11 strokes over Harris English last year at TPC Boston, went on to capture the Tour Championship and easily claim the FedEx Cup for the first time.

“It was like, I can do what I can do, but this guy is on a different level,” said English, who played alongside Johnson in the final round of The Northern Trust. “It’s incredible to watch; you have to play your game and let him do what he does.

“It’s different, but when Dustin gets in a zone like that it’s probably as close to Tiger (Woods) as a guy has been out here.”

Johnson, who has 24 PGA titles in his career including two majors, has claimed six victories during the playoffs since winning the first of his two titles in the BMW Championship in 2010, but last year was the first time he won two in the same season.

Kevin Kisner, who captured the Wyndham Championship in a six-man playoff last Sunday and climbed to 29th in the FedEx Cup standings, has seen it all since he grew up playing junior golf with Johnson in South Carolina.

“That’s the type of talent he is,” Kisner said of Johnson. “He can absolutely dismantle a golf course when he’s on and lead the field in putting. Obviously, he drives it straight, and hard to believe, there are (players who drive it) further on tour. So when you add those two up, pretty much unstoppable.

“I’ve been watching it for 25 years. I’m pretty accustomed to. It when he’s on, I just step to the side and try to add on to my bank account.”

Said Johnson of the 2020 Barclays: “For four days it was definitely by far the best everything has worked. … All I try to do every week is put myself in a position that gives me a chance to win on Sunday.”

Since winning the 2020 Masters last November, DJ has only five top 10 finishes including a tie for eighth in the Open Championship and a tie for 10th in the WGC-FedEx St. Jude Invitational in two of his last three starts, and might be close to getting back on track.

Rounding out the top 10 are Abraham Ancer of Mexico, sixth-ranked Bryson DeChambeau, seventh-ranked Louis Oosthuizen of South Africa, fifth-ranked Justin Thomas and Sam Burns. Oosthuizen withdrew from The Northern Trust because of a neck injury and hopes to play next week in the BMW Championship.

Johnson is 17th in the rankings, which leaves him in position to become the third player to claim the FedEx Cup twice, which was achieved by Woods (2007 and 2009) and Rory McIlroy of Northern Ireland (2016 and 2019).

Only the top 125 players in the FedEx Cup standings make the playoffs and other past Northern Trust champions in the field include DeChambeau (2018), Adam Scott of Australia (2013), Jason Day of Australia (2015) and Patrick Reed (2016 and 2019), his victory two years ago coming the last time the tournament was played at Liberty National.

1. Dustin Johnson, United States – DJ, defending his Northern Trust and FedEx Cup titles, hasn’t played great this year but tied for eighth in the Open Championship and a tied for 10th in the WGC-FedEx St. Jude Invitational. He won this event last year by 11 strokes and added the Tour Championship for his sixth playoff victory to claim the FedEx Cup for the first time.

2. Jon Rahm, Spain – The top-ranked player in the world has had Covid-19 twice in recent months, but still sits fifth in the FedEx Cup standings thanks to his U.S. Open victory and 11 other top-10 finishes. Rahm claimed his only playoff victory last year when he beat Dustin Johnson in a playoff to win the BMW Championship with a birdie on the first extra hole.

3. Collin Morikawa, United States – The third-ranked Morikawa leads the FedEx Cup standings on the strength of victories in the Open Championship and the WGC-Workday Championship, and sixth other top-10 results. He is looking for his first victory in the playoffs after finishing sixth in the Tour Championship and tying for 20th in the BMW Championship last year.

4. Xander Schauffele, United States – Winner of the Olympic Gold Medal in the Olympic Games in Tokyo, the fourth-ranked Schauffele is 13th in the FedEx Cup rankings with three runner-up finishes among seven top-10 results on the PGA Tour this season. He claimed his only playoff victory when he beat Justin Thomas by one stroke in the 2017 Tour Championship.

5. Jordan Spieth, United States – Has captured the Valero Texan Open and finished second twice among nine top-10 finishes this season to place him second in the FedEx Cup standings. Spieth won the 2015 Tour Championship, his only playoff victory, to claim the FedEx Cup, and also lost to a birdie by Dustin Johnson on the first hole of a playoff in the 2017 Northern Trust.

6. Rory McIlroy, Northern Ireland – Rory and Tiger Woods are the only players to win the FedEx Cup twice, McIlroy doing it in 2016 and 2019. He has five victories in the playoffs, including the Tour Championship both of those years. McIlroy highlighted what has been a down season for him by winning the Wells Fargo among his six finishes in the top-10.

7. Justin Thomas, United States – JT doesn’t have a top-10 finish since winning the Players Championship in March, but only poor final rounds left him in a tie for 19th in the U.S. Open and a tie for 26th in the WGC-FedEx St. Jude. Claimed the 2017 FedEx Cup with a win in the Dell Technologies, a tie for sixth in The Northern Trust and solo second in Tour Championship.

8. Abraham Ancer, Mexico – Finally claimed his first PGA Tour victory in the WGC-FedEx St. Jude Open after finishing second four times. Ancer has posted six finishes in the top-10 this season and 16 in the top-25 to sit sixth in the FedEx Cup standings heading into the playoffs. He finished second in the 2019 Northern Trust and tied for 18th in the Tour Championship last year.

9. Brooks Koepka, United States – The eighth-ranked Koepka hasn’t had his best game this season coming off knee and hip injuries, but still won the Waste Management Phoenix Open and has finished second twice among eight top-10 finishes. Surprisingly, he has never won a playoff event, although he tied for third in the 2019 Tour Championship to finish third in the standings.

10. Viktor Hovland, Norway – Claimed his first two PGA Tour victories this season in the Puerto Rico Open and the Mayakoba Golf Classic, finished second twice and third twice among six top-10 finishes and is 11th in the FedEx Cup standings. Hovland tied for 18th in the 2020 Northern Trust and tied for 20th in the Tour Championship in his first season in the playoffs.

2. Matt Jones, Australia – Won Honda Classic for first PGA Tour victory since 2014 and is 39th in FedEx Cup standings. A T-4 in the 2015 Deutsche Bank is his best finish in the playoffs.

3. Dylan Frittelli, South Africa – Five-time winner as a pro Was T-5 in Masters and solo fifth in The Open to get into the playoffs. T-33 in the BMW last season is his best result in the playoffs.

5. Henrik Norlander, Sweden – Two-time winner on Korn Ferry Tour was T-2 in the Farmers among three T-10s and seven T-25s this season to make the FedEx Cup playoffs for second time.