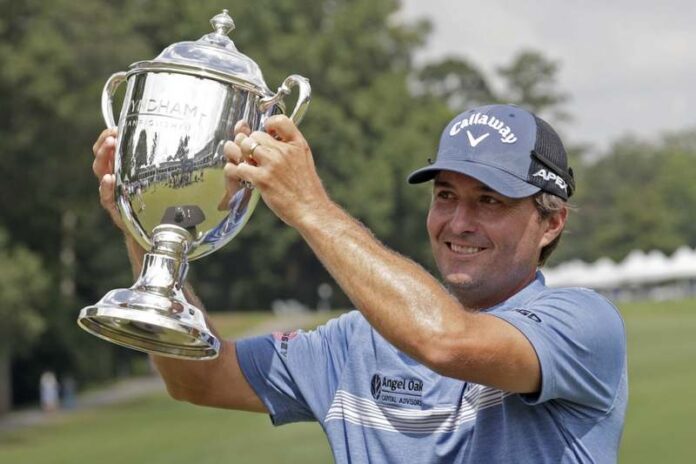 Kevin Kisner was the last golfer standing in a six-man playoff.

The 37-year-old Kisner sank a four-foot birdie putt on the second extra hole to turn back Kevin Na of Diamond Bar, Adam Scott of Australia, Roger Sloan of Canada, Si Woo Kim of South Korea and Branden Grace of South Africa to win the Wyndham Championship at Sedgefield Country Club in Greensboro, N.C.

All six players made par on the first playoff hole, where Scott missed a four-foot birdie putt.

“My first playoff win,” said Kisner, who had been 0-5 in playoffs on the PGA Tour. “To be standing here is pretty sweet. Walking down the fairway on the first playoff hole, I said that with six players I was probably the least likely to win because of my record. I’m really glad I was wrong.

“My caddie reminds me that I won a playoff to get into (the 2019 WGC) Match Play (round of 16) against Ian Poulter the year I won, so he says that I’m 1-and-5, everybody else says I’m 0-and-5. I never thought that Adam was going to miss that putt. The only thing I could think of was he probably had to wait on that putt longer than any putt he’s ever had to wait on to win with six guys going ahead and putting before him.

“Standing on the 15th tee, I didn’t think I had a chance. … It was one of those putts on the second playoff hole you dream about having—three and a half, four feet, right edge, just get it going.”

Kisner, who claimed his fourth PGA Tour victory and first since the 2019 WGC-Dell Technologies Match Play, birdied the 16th and 17th holes to shoot 4-under-par 66 to finish at 15-under 264, while Grace sank a 29-foot birdie putt on the last to also shoot 66, which Na and Sloan matched, while Kim, the 2016 Wyndham champion) sank a seven-foot eagle putt on the fifth hole to highlight a bogey-free 64, and Scott totaled 65.

Six players in the playoff tied a PGA record, the third time it has happened, the last in the 2001 Nissan Open, now the Genesis Invitational, at Riviera Country Club in Pacific Palisades.

“I watched (the Riviera playoff) on TV when I was a kid and Robert Allenby (won),” Na said. “It was kind of fun being a part of this.”

Russell Henley, who led all the way until the final hole after opening with a 62, made four bogeys on the back nine to card a 71 and finished one stroke back in a tie for seventh with 2011 Wyndham champion Webb Simpson, who holed out from 175 yards for an eagle at No. 11 in a 66, and Kevin Streelman, who birdied four of the first eight holes in another 66.

Henley, who was trying to win for the first time since the 2017 Shell Houston Open, missed a 25-foot downhill birdie putt from the fringe on the last hole that would have given him the victory and the six-foot comebacker for par to make it a seven-man playoff.

“I really felt like I hit both those putts on 18 how I wanted to,” said Henley, who also missed a two-footer for par at No. 11. “I feel like I hit the second putt right where I was looking and it broke. Just some mistakes. I knew I had to shoot under par today, so I’m just disappointed. It stings pretty bad.”

Olympic Silver Medalist Rory Sabbatini of Slovakia carded a 68 to wind up two shots back in a tie for 10th with Justin Rose of England, who shot 66 but made a bogey on the last hole that kept him out of the FedEx Cup playoffs that start on Thursday, Nick Taylor of Canada (64), Brendon Todd (66) and Adam Hadwin of Canada (66).

Olympic Bronze Medalist C.T. Pan of Taiwan tied for 29th after a 67 that included a 16-foot eagle putt on the 15th hole.