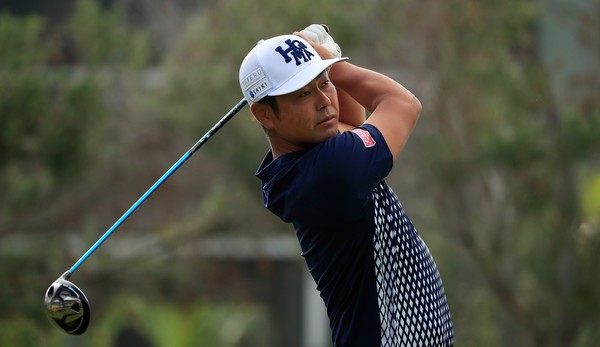 Hideto Tanihara of Japan continued to be the Cinderella story of the WGC-Dell Technologies Match Play Championship.

Tanihara, seeded 54th in the 64-player field, eliminated No. 12 Paul Casey and No. 47 Ross Fisher, both from England, on Saturday, advancing to a semifinal match against top-seeded Dustin Johnson on Sunday at Austin Country Club in Austin, Texas.

No. 21 Jon Rahm of Spain will play No. 42 Bill Haas in the other semifinal.

Tanihara was even with Casey before closing out a 2-and-1 victory with birdies on the 16th and 17th holes, sinking a four-footer after hitting a brilliant approach shot on what proved to be the final hole.

Against Fisher, he trailed only after the first hole before winning four consecutive holes with birdies through No. 9 en route to a 4-and-2 victory.

“My shot has been good this whole week,” said the 38-year-old Tanihara, who has won 14 times on the Japan Golf Tour. “I knew it would come down to the putting. So … the putting was pretty good, so I’m happy.

” … Basically the wind was blowing the other way (on Saturday), so it was hard to judge the second shots and the pin positions were not easy. It was really hard to play. But I guess at the end I was able to get the two birdies (against Casey) and was able to win the match at the end.”

Said DJ: “I was 3-up at the turn and then make a couple mistakes. Alex was a tough opponent, but I was able to make three birdies to win. There’s a lot of golf to be played tomorrow and anything can happen.”

Rahm, the rookie out of Arizona State, routed No. 61 Charles Howell, 6 and 4, in the Round of 16 before downing No. 62 Soren Kjeldsen, another tournament surprise, 7 and 5, in the quarters.

Said Rahm: “The golf I’ve played the last three matches really has been very impressive even to myself, and it seemed to get better as I played, which is something that doesn’t happen often. I felt my confidence was growing. The first few matches my putter let me down, but I was hitting the ball great. Today, my putter was rolling. I think that’s one of the main why I was able to do it the way I did it today.”

Haas sank an 11-foot par putt on the 18th hole to beat No. 46 Kevin Na, 1up, before taking the lead with three birdies in a span of four holes on the front nine en route to a 2-and-1 victory over No. 14 Phil Mickelson.

Said Haas: “Just playing in the quarterfinals is a big deal and especially against Phil. Playing this match and beating him is something I’ll never forget.”