No. 1 Scheffler Leads Masters by 5 After 67 in Round Two, Woods Tied for 19th 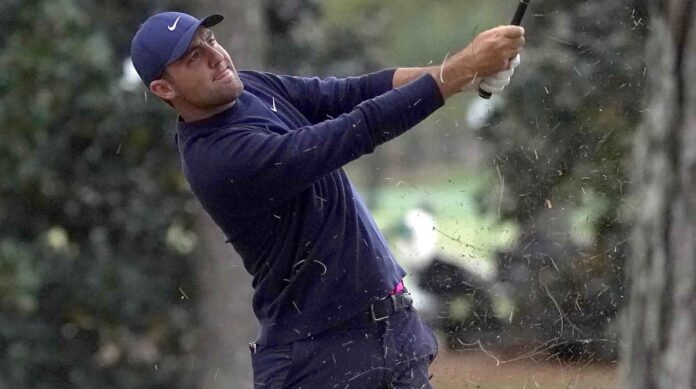 Scottie Scheffler showed again why he has climbed to No. 1 in the World Golf Rankings so quickly.

The 25-year-old Scheffler shot 5-under-par 67  in tricky winds to take a five-stroke lead over four players after two rounds of the 86th Masters, the first PGA Tour major of the year, at Augusta National Golf Club in Augusta, Ga.

In the other big story this week, five-time Masters champion Tiger Woods bounced back from a stumbling start to salvage a 74 and is tied for 19th. Woods is playing for the first time in more than 16 months after a horrifying rollover accident in his SUV which nearly resulted in the amputation of his lower right leg.

“I just wanted to get off to a decent start, but I made bogeys on two of my first three holes before playing great the rest of the day,” said Scheffler, who has won three times in his last five tournaments and also has a runner-up finish this season to lead the FedEx Cup standings.

“Then I had a couple of good par saves and made birdies at Nos. 7 and 8, and really got things going. I played great for the rest of the day and had a really solid back nine. I put in a lot of great preparation for this golf tournament and just want to win.

“I’m looking forward to tomorrow and the weekend.”

Scheffler, whose best finish in the majors was a tie for fourth in the 2020 PGA Championship at TPC Harding Park in San Francisco, rattled off four birdies in five holes through No. 16 and recorded a 36-hole score of 8-under 136.

His five-stroke lead after 36 holes matched the Masters record set by Harry Cooper in 1936 and equaled by Herman Kaiser in 1946, Jack Nicklaus in 1975, Tom Watson in 1976 and Jordan Spieth in 2015. All except Cooper went on the claim the Green Jacket.

Defending Masters champion Hideki Matsuyama birdied three of the first six holes on his way to a 69 and is tied for second with Shane Lowry of Ireland, the 2019 Open champion, who made his lone bogey on the first hole in a 68, Charl Schwartzel of South Africa, the 2011 Masters champion who made three birdies on the back nine in a 69, and first-round leader Sungjae Im of South Korea, who also had three birdies on the back nine in another 69.

Eighth-ranked Dustin Johnson, the 2020 Masters champion, made only one birdie and finished his 73 with nine straight pars and is six shots back in a tie for sixth with Kevin Na of Diamond Bar and Harold Varner III, who both shot 71, and Cameron Smith of Australia, who salvaged a 74 with two birdies on the last four holes.

Third-ranked Collin Morikawa of La Canada Flintridge and Cal carded at 70 and is seven down in a tie for 10th with seventh-ranked Justin Thomas, who made three birdies on each nine in a 67, Will Zalatoris, who shot 72, Corey Conners of Canada, who totaled 73, and Joaquin Niemann of Chile and Danny Willett of England, who both came in 74.

Woods made bogeys on four of his first five holes and two more on the back nine, but salvaged his round with three birdies on the back nine and is in a tie for 19th that includes fifth-ranked Patrick Cantlay of Los Alamitos and UCLA, who had three bogeys down the stretch in a 75.

“So many things were not going my way at the beginning and some of it was the conditions and some of it was me,” said Woods, who opened with a 71. “But I was able to get back on track, even though I missed a couple of putts I should have made. I was just little rusty at the start, but my game started coming around.

“However, I was able to fight back and get back in the game. I was able to come around and make a comeback that kept me in the tournament. Scotty is really playing great, but I’m happy to be there on the weekend and I think it’s going to be exciting.”

Second-ranked Jon Rahm shot 72 and is in a tie for 23rd with ninth-ranked Rory McIlroy, who can complete the Career Grand Slam with a victory this week and made two birdies on the back nine in a 73, while third-ranked Viktor Hovland struggled to a 76 despite an eagle eighth hole and is tied for 45th,  making the cut on  the number.

Xander Schauffele of La Jolla and San Diego State who won the Olympic Gold Medal in Beijing, struggled to a 77 with seven bogeys and missed the cut by three strokes.