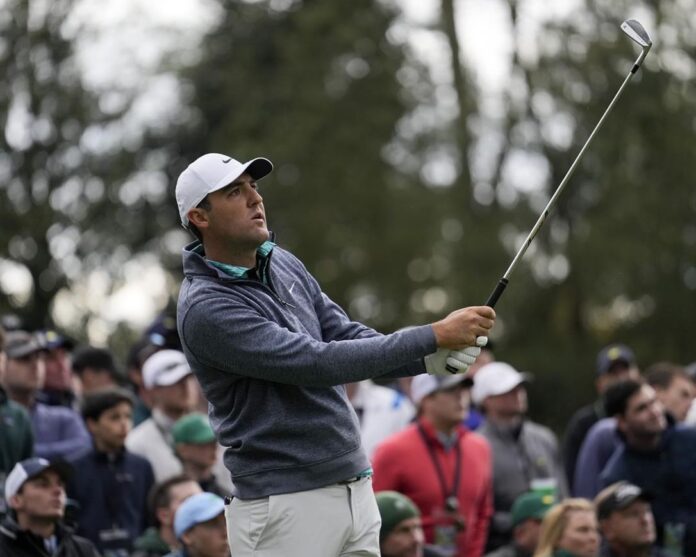 Top-ranked Scottie Scheffler escaped what could have been a huge number on the last hole and remained atop the leaderboard in search of his first major championship.

The 25-year-old Scheffler salvaged a bogey at No. 18 to cap a 1-under-par 71 in cold and windy conditions to take a three-stroke lead over Cameron Smith of Australia to the final round of the 86th Masters at Augusta National Golf Club in Augusta, Ga.

“I felt really composed out there, trusted myself and hit a lot of good shots,” said Scheffler, who has won three times in the last five weeks. “I thought I played pretty well today, even though the conditions were tough.

“I’ve been playing well lately and have worked hard to prepared myself to be in this position. I’m going to stay up for a little while tonight and sleep in a little tomorrow because I begin late again. My tee times the last couple of days have been about the same time, so I’ve got a pretty good routine going.

“I just have to keep doing what I have been doing for one more day. Today was a lot of fun and I hope tomorrow will be the same.”

Scheffler drove into the trees on the 18th hole and it took a while to find his golf ball, but it was unplayable, so he took a drop onto the nearby pine straw. Then he hit a brilliant shot from over 200 yards that rolled past the pin and barely off the green, from where he two-putted for a remarkable bogey.

After taking a five-stroke lead into round three, Scheffler increased it to six with four birdies on the front nine and another at No. 13, before making four bogeys coming home to finish 54 holes at 9-under 207.

Smith, who won the Players Championship in his last start, collected three birdies on each nine in a 68 that was the low score of the day by two strokes. He is attempting to become the only player other than Tiger Woods (2001) to win the Players and Masters in the same season.

“I played within myself and that gave me plenty of opportunities,” said Smith, who also won the Sentry Tournament of Champions in January and has five PGA Tour victories. “Conditions were tough out there and you had to balance my aggressiveness because any mistake could lead to a big number, but you had to stay somewhat aggressive to make a good score.

“I hit a lot of quality iron shots and the putts went in today. I’ve proven that I can get it done against the best players in the world and it’s good feeling. I have been watching this tournament for as long as I can remember and it would be great to win it. But it’s not given to you, you have to earn it.”

Sungjae Im of South Korea, who won the 2019 Players and tied for second in the 2020 Masters, bounced back with a double bogey on the first hole and two bogeys on the front nine with four birdies on the back and is five shots back in solo third, while 2019 Open champion Shane Lowry of Ireland and 2011 Masters champion Charl Schwartzel of South Africa both shot 73 and are one more down in a tie for fourth.

Seventh-ranked Justin Thomas and Corey Conners of Canada both totaled 72 and are eight strokes behind in a tie for sixth, while Danny Willett of England finished at 73 and is one more back in solo eighth.

Third-ranked Collin Morikawa of La Canada Flintridge and Cal carded a 74 is 10 shots back in a tie for ninth with eight-ranked Dustin Johnson, who finished at 75, eighth-ranked Rory McIlroy of Northern Ireland, who wound up at 71, and Jason Kokrak, who also had a 71.

McIlroy’s bid to complete the Career Grand Slam this week will take a near-miracle on Sunday.

Five-time Masters champion Tiger Woods, playing for the first time in more than 16 months after a serious rollover crash in his SUV early last year nearly cost him his right leg, struggled to a 78 with three three-putts and a four-putt to slide to a tie for 41st after playing some solid golf the first two days.