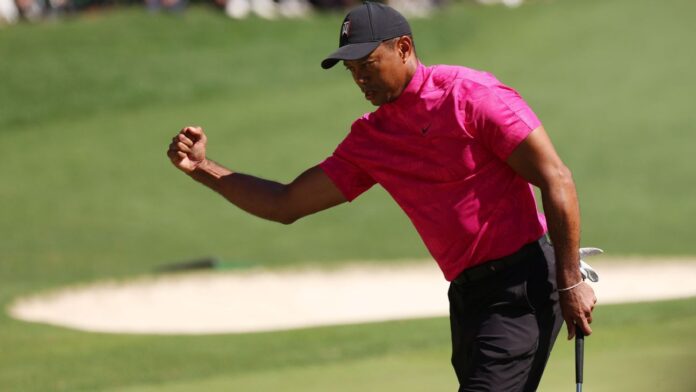 Sungjae Im of South Korea is leading the 86th Masters after one round, but he had to share the spotlight with Tiger Woods.

The 24-year-old Im shot 5-under-par 67 to take a one-stroke lead over Cameron Smith of Australia in the first men’s major championship of the year at Augusta National Golf Club in Augusta, Ga.

Woods, 46, playing in his first official event in almost 17 months after being seriously injured in a rollover SUV accident early last year, amazed the crowd by shooting 1-under 71 and is tied for 10th.

“The place was electric,” said Woods, who claimed his fifth Master title in 2019 among 15 major championships. “I hadn’t played like this since ’19 when I won, because in ’20 we had COVID and we had no one here, and I didn’t play last year. So, to have the patrons fully out and to have that type of energy out there was awesome to feel.

“I’m going to be sore, yes. That’s just the way it is. And this is only one round. We’ve got three more to go. There’s a long way to go and a lot of shots to be played. I was able to finish up in the red. I’m right where I need to be.”

Woods, who sustained a severe right, leg injury in the accident hit his tee shot on the 180-yard par-3 sixth hole to within two feet for his first birdie, two-putted for a birdie at No. 13, in addition to sinking a 30-foot birdie putt at No. 16 to go against bogeys at Nos. 8 and 14, while making several impressive par saves.

Im, who has won five times as a pro, including twice on the PGA Tour in the 2020 Honda Classic and the 2021 Shriners Children’s Open, birdied the first three holes, added a 12-foot eagle putt at No. 13 and claimed the outright lead with a two-putt birdie on the 15th.

“Records are always great, but I try not to think about them,” said Im, who finished second in the 2020 Masters behind Dustin Johnson and became the first South Korea to lead the Masters after any round. “There are three more days to play and I have to be prepared to do the same thing.

“This is a tournament that brings so many great players and legends together, and my primary goal is to make the cut. Once I get there, then I will try to bear down over the final two rounds. I feel comfortable when I come to Augusta. I feel I can play well here every time.”

Smith, who took three weeks off after winning the Players Championship, carded a 68 in his first week back despite double bogeys on the first and last holes, while the eighth-ranked Johnson made his only bogey on No. 17 in a 69 and is tied for third with top-ranked Scottie Scheffler, who made his only bogey on the last hole, Joaquin Niemann of Chile, who holed out from the fairway for an eagle on ninth hole, and Danny Willett of England, who had two birdies in a bogey-free back nine.

Fifth-ranked Patrick Cantlay of Los Alamitos and UCLA made three birdies on the back nine in a 70 and is tied for seventh with Corey Conners of Canada, whose lone bogey came at No. 7, and Jason Kokrak, who made three straight birdies through No. 14.

Woods is in a huge tie for 10th at 71 with Will Zalatoris, Daniel Berger, Matt Fitzpatrick of England, Harry Higgs, Kevin Na of Diamond Bar, Harold Varner III, Tony Finau and Webb Simpson.

Defending champion Hideki Matsuyama of Japan is in a tie for 19th at 72 that includes fourth-ranked Viktor Hovland of Norway, while ninth-ranked Rory McIlroy of Northern Ireland, who can complete the Career Grand Slam by winning the Masters, shot 73 and is in a tie for 31st that includes third-ranked Collin Morikawa of La Canada Flintridge and Cal.

Second-ranked Jon Rahm of Spain made three bogeys on the back nine in a 74 and is in a tie for 43rd that includes 10th-ranked Xander Schauffele of La Jolla and San Diego State, while seventh ranked Justin Thomas is tied for 70th at 76.