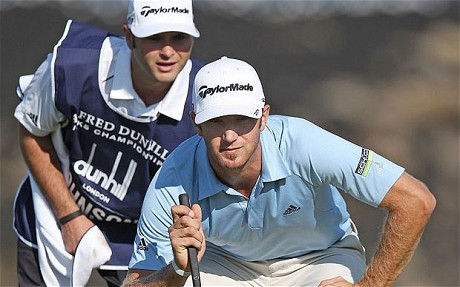 Dustin Johnson dumped caddie Bobby Brown once before and brought him back, but now the relationship seems to be over for good.

The 29-year-old Johnson had his younger brother, Austin, on the bag last month when he won the WGC-HSBC Championship in China, his first victory the World Golf Championships.

“Having my brother on the bag has been cool; I love it,” said DJ, who has won 10 times as a pro but has given away several good chances to claim his first major title. “He’s my brother. I like having him out here. And we do good.”

Brown was given much of the blame when Johnson blew a three-stroke lead heading to the final round of the 2010 U.S. Open at Pebble Beach by closing with an 82, and for being assessed a two-stroke penalty for grounding his club in a bunker while holding a one-shot lead on the final hole of the PGA Championship two months later at Whistling Straits.

And the following season, Brown gave him the wrong tee time and DJ avoided being disqualified from the Northern Trust Open at Riviera only by hustling to the first tee with six seconds to spare, but still received a two-stroke penalty.

Austin Johnson played basketball at Charleston Southern before transferring to the College of Charleston to finish his degree.

“I was getting my resume together,” Austin said.

Austin will be on the bag when his brother defends his title in the Hyundai Tournament of Champions next month at Kapalua.