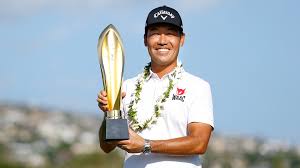 Kevin Na struggled when he left Diamond Bar High in Southern California to turn pro before his senior year in 2001, but now he is an established star on the PGA Tour.

The 37-year-old Na tapped in a 20-inch birdie putt on the final hole to cap a 5-under-par 65 and win the Sony Open in Hawaii by one stroke over Chris Kirk and Joaquin Niemann of Chile at Waialae Country Club in Honolulu.

“When I was young, it took me forever to win,” said Na, who claimed his fifth PGA Tour victory and has won in each of the last four seasons. “I felt really in control out there, hit a lot of good shots and was really in control.

“I’m so happy with my family at home and I think it shows up out here. Playing 18 years on tour is really paying off out here, winning four seasons in a row. Great start to the new year and I know this is a great course for me.

“I battled some injuries last year, but it helps that I’ve been out here (on the PGA Tour) for 13 years with my caddie, Kenny Harms.”

Na, who was born in South Korea and moved to the United States when he was 8, also thanked the Korean fans in his native language after recording a winning score of 21-under 259, thanks for four birdies on the last six holes.

Kirk, who was playing on a major medical extension and regained his PGA Tour status, birdied four of the last seven holes for a fourth straight 65, while Niemann, who lost in a playoff to Harris English last week in the Sentry Tournament of Champions, birdied the last two holes for a 66.

“It’s incredible,” said Kirk, who won four times through 2015 on the PGA Tour before battling depression and alcoholism. “I knew I needed a top three finish this week, but never guessed it might happen.

“I’m just so thankful for the love and support of my family the least few years and I can’t wait to see them. It’s great to wake up in the morning and be in a good place mentally. I just want to get back to the form I had before.”

Brendan Steele, who started the final lead with a two-stroke lead, birdied the seventh hole and sank a 21-foot eagle putt on No. 9, but played the back nine in 2-over without a birdie and his 69 left him two back in a tie for fourth with eighth-ranked Webb Simpson, who had a 64 that included a 24-foot eagle putt on the ninth, and Mark Leishman of Australia, who carded a third straight 65.

Fifth-ranked Collin Morikawa, the reigning PGA champion from La Canada Flintridge and Cal, had four birdies on the back nine in a closing 64 and was three down in a tie for seventh with Patton Kizzire, who birdied the last two holes for another 64, Billy Horschel, who had a 65, and Daniel Berger, who totaled 66.