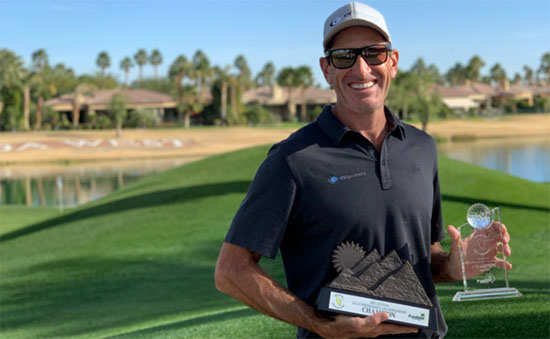 Cullen Brasfield of La Quinta came from two strokes behind in the final round to win the Palm Springs Golf Championship for the second straight year, claiming the title by four shots over Mitchell Cornell of Incline Village, Nev., on the Stadium Course at PGA West in La Quinta.

Cornell, a senior at Penn who won the Nevada Division III High School Championship in 2015 and 2016, held a two-shot lead after two rounds and was still tied at the top until making a bogey on the ninth hole in the final round.

Brasfield, who turns 41 next month, then pulled away with birdies on the 11th, 14th and 15th holes.

“I stood on the 16th tee and hit one so hard and straight, just a great confident swing.” said Brasfield, who then found a greenside bunker but was able to get up-and-down for par. “Over the past two months I have worked really hard with my instructor, Bryan Lebedivitch and I had no doubt I could get that up and down.

“Still had two tough tee shots on 17 and 18, but just had to be mentally strong and hit good golf shots. My swing felt solid, so nope, no butterflies on those two shots. Just focused on my game plan and tried to execute.

“Golf is hard, no doubt about it. A win in your 40s, such a great feeling. It’s why we practice, and work at this crazy game. I love playing tournament golf against the best. Can’t wait for the next one.”

To sign up for the 2022 Palm Springs Golf Championship, go to