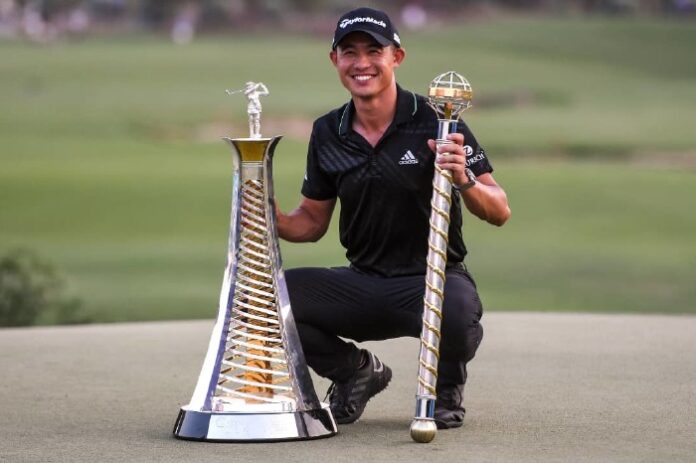 The 24-year-old Morikawa, from La Canada Flintridge and Cal, rallied with a 6-under-par 66 in the final round to capture the DP World Tour Championship-Dubai on the Earth Course at Jumeirah Golf Estates in Dubai, United Arab Emirates.

In doing so, the second-ranked Morikawa who won the 2020 PGA Championship, became the first American to win the season-long Race to Dubai on the European Tour.

“It’s an honor to be the first American to do that, to put my name against many, many greats and Hall of Famers,” said Morikawa, who claimed his sixth pro victory and third this year. “It’s special. I get touched up just talking about that. To close it out not just with a top 10 but to actually win … what a great way to finish.

“Like I said, two years ago, it wasn’t my thought. It was, ‘Yeah, let’s go play around the world,’ but we didn’t know what cards were going to be dealt. To have this chance and finally close it out, and not just closing it out with a top 10 or something, but to actually win the DP World Tour Championship, which concluded with the Race to Dubai, not a better way to finish.

“Starting off with six pars (in the final round), especially with some birdie holes, wasn’t fun. I felt like I was hitting some good shots and I wasn’t getting the breaks I needed. The putts weren’t dropping, and I just told myself when I looked at the leaderboard after nine that I was still in there and I was still two or three back at that point and I just needed one spark.”

Morikawa, who this year also won the Open Championship at Royal St. George’s and the WGC-Workday Championship that are sanctioned by the PGA Tour and the European Tour, birdied five of the last seven holes to post a winning score of 17-under 271.

Matt Fitzpatrick of England birdied six of the first 10 holes in his own 66 to finish three back in a tie for second with Alexander Bjork of Sweden, who shot 70, while Nicolai Hojgaard of Denmark totaled 67 and was one more shot behind in a tie for fourth with Robert McIntyre of Scotland, who wound up at 71.

Third-round leader Rory McIlroy of Northern Ireland struggled to a 74 that included only two birdies and finished five strokes back in a tie for sixth with Ian Poulter of England, who had a second straight 67, and Dean Burmester of South Africa, who finished at 69.

Billy Horschel, who finished second in the Race to Dubai, tied for 32nd after a second straight 69, while top-ranked Jon Rahm of Spain, who finished third in the season-long Race, did not play in the tournament.