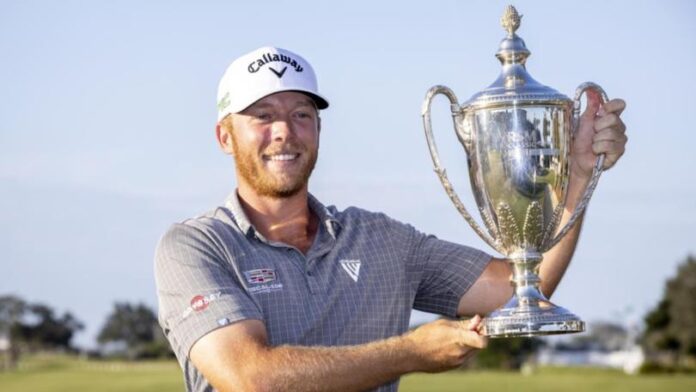 Talor Gooch was in control all the way to his first PGA Tour victory.

The 30-year-old Gooch carded a bogey-free, 6-under-par 64 to win the RSM Classic by three strokes over Mackenzie Hughes of Canada, who shot 62, on the Seaside Course at Sea Island Resort in Sea Island, Ga.

“To finish the Fall season off like I just did, it’s a dream come true,” said Gooch, whose only other professional victory came in the 2017 News Sentinel Open on what is now the Korn Ferry Tour.

“I’m always aware … I keep an eye on things, but it doesn’t change what you’re doing. knew I had 20 (-under) in my mind. Get to that and it will make the rest of field have to do something good. But you almost put limitations on yourself when you think about scoreboards and scores.

Gooch, who earned berths in the 2022 Masters and the Sentry Tournament of Champions, took a three-stroke lead into the final round and maintained his margin by making birdies on two of the first four holes before adding four on the back nine en route to a winning score of 22-under 260.

Hughes, who claimed his only PGA Tour victory in the 2017 RSM Classic champion, collected five birdies on the front nine and added four more on the back nine against a single bogey at No. 12 in his 62.

“I knew it was going to require a low one today, and if you told me I would have shot 62, I thought I might be pretty close, but Talor obviously played great this week and deserved to win,” said Hughes, who has two other pro victories on lower tours.

Sebastian Munoz of Colombia, the first-round leader at 60, birdied three of the last five holes for a 65 and finished four shots back in solo third, while Tyler McCumber shot 60 and wound up in a tie for fourth with Cameron Smith of Australia, who had seven birdies in a 64, Tom Hoge, who wound up at 67, and Seamus Power of Ireland, who closed with a 68.

McCumber barely missed a 53-foot birdie putt while finishing on the ninth hole.

“It looked great the entire way,” McCumber said of the long putt that could have given him A 59. “The guess was sort of in the beginning of the putt. It was a grain change. It was right-to-left grain and then right-to-left and down. I knew if I got it to the one point at the grain change, I knew what it was going to do.

“So obviously you’re hitting it hard from 53 feet. Just wanted to have really good speed and I felt like I had the right speed. Just hung out there a little longer than I needed. … I started thinking about 59 on my 16th hole.”

Webb Simpson and Taylor Moore both carded 66s to finish eight down in a tie for eighth, while Denny McCarthy shot a bogey-free 66 to wind up nine shots behind in a tie for 10th with Luke List, who came in at 68.

Two-time major champion and local resident Zach Johnson sank a 15-foot birdie putt on the last hole for a 66 to tie for 16th, U.S. Ryder Cup standout Scottie Scheffler tied for 57th after a 68, and tournament host Davis Love III closed with a 67 to finish 68th.

This was the ninth and final event in the Fall portion of the 2021-22 PGA Tour season, which will continue with the Sentry Tournament of Champions on the Plantation Course at Kapalua Resort on the Hawaiian island of Maui.