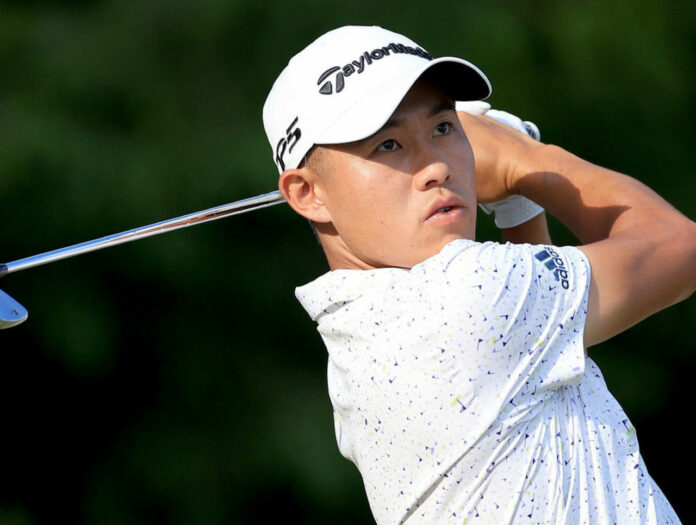 Seventh-ranked Collin Morikawa seems to have his major mojo back.

The 25-year-old Morikawa (pictured), from La Canada Flintridge and Cal, carded a 4-under-par 66 and is tied for the lead with Joel Dahmen midway through the 122nd United States Open at The Country Club in Brookline, Mass.

“I’ve been struggling a bit lately and it was a little frustrating, but the last two days I just went with what I have and it worked out well,” said Morikawa, who won the 2020 PGA Championship and the 2021 Open Championship. “I didn’t have my ‘A Game,’ but I figured some things out and made some putts for birdies and others to save par.

“I’ve been striking the ball well, and you have to do that in major championships. I know what my misses are going to do and I’m just working with what I have. I hope the first two days are an indication of what I’m going to do on the weekend.

“I hit a great shot on my last hole and didn’t make the putt, but still was able to take the lead.”

Morikawa, who has not won this season but finished second in the Sentry Tournament of Champions and the CJ Cup at the Summit, started at No. 10 and made three birdies on the back nine before adding two on the front, with his only bogey coming at No. 4 as he finished 36 holes at 5-under 135.

Dahmen, who opened with a 67, finished two rounds even with Morikawa by making three birdies on the front nine and adding one more coming home to go with two bogeys while shooting 68.

“I hit the ball everywhere in a practice round on Tuesday, but hit it better in another practice round on Wednesday and have been pretty good the last two days,” said Dahmen, whose only PGA Tour victory came in the 2021 Corales Puntacana Resort & Club Championship. “I scrapped it around pretty well today to stay in it.

“I’ve hit a bunch of fairways and made some pretty good par putts that kept me going. This is a bigger stage for me, but it has been pretty cool and the fans have been great to me. I feel like I’m going to hang around.

“If I can do this the first two days, why can’t I do it for the next two?”

Second-ranked Jon Rahm, the defending U.S. Open champion, made an eagle on the 14th hole and added two birdies down the stretch for a 67 and is one stroke back in a tie for third with third-ranked Rory McIlroy, who bounced back from an early double-bogey with three birdies on the back nine for a 69, Aaron Wise of Lake Elsinore and Hayden Buckley, who both finished at 68.

Top-ranked Scottie Scheffler chipped in for an eagle at No. 14 en route to a 67 and is two shots behind in a tie for seventh with Patrick Rodgers of Stanford (68), Beau Hossler of Rancho Santa Margarita (68), Nick Hardy (68), Matthew NeSmith (69) and left-hander Brian Harman (69).

Ninth-ranked Sam Burns birdied four of the first eight holes on his way to a 67 and is tied for 13th, 2021 Olympic Gold Medalist Xander Schauffele of La Jolla and San Diego State is tied for 16th after a 69, and fifth-ranked Justin Thomas, the reigning PGA champion, was all over the place in a 72 and is in a tie for 31st that includes former world No. 1 Dustin Johnson, the 2016 U.S. Open champion and 2021 Masters winner.

Tenth-ranked Jordan Spieth, the 2015 U.S. Open champion, is tied for 40th after making two late birdies for a 70, and fourth-ranked Patrick Cantlay, the reigning FedEx Cup champion from Los Alamitos and UCLA, shot 71 and is tied for 54th.

Sixth-ranked Cameron Smith of Australia, the reigning Players champion, struggled to a 74 and missed the cut by three strokes in a tie for 98th, while eighth-ranked Viktor Hovland of Norway made bogeys on nine of the last 11 holes in an ugly 77 while missing the weekend by four shots in a tie for 109th.

Phil Mickelson of San Diego, who has won six major titles and can complete the Career Grand Slam by winning the U.S. Open in which he has finished second six times, wound up at 78-73 to miss the cut by eight strokes in a tie for 134th.

Share
Facebook
Twitter
Pinterest
WhatsApp
Previous article
Hadwin’s 66 Leads McIlroy, Four Others by One Stroke in the 122nd U.S. Open
Next article
Zalatoris, Fitzpatrick Tied for the Lead Going to Last Round of 122nd U.S. Open