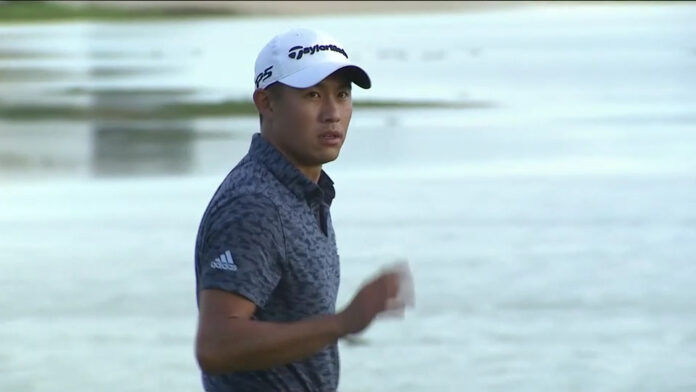 Collin Morikawa was back on the course where he blew a five-stroke lead in the final round last year.

Morikawa, trying to make up for that collapse, sank a 25-foot birdie putt on the last hole to shoot 3-under-par 69 and tie for the first-round lead in the 23rd Hero World Challenge with defending champion Viktor Hovland of Norway, Tom Kim of South Korea and Sepp Straka of Austria in windy conditions at Albany Resort in New Providence, The Bahamas.

“It was just an average round, but I got going late on the front nine and then I was able to see some putts drop in the back nine,” said Morikawa (pictured), who is from La Canada Flintridge and the University of California in Berkeley. “I hope to keep my momentum going forward into the next three days.

“The last year has been a little frustrating for me, but I’m in a much better place now. It was difficult for much of the year, but I think I am turning the ship around and can start winning tournaments again. You blink and a year goes by pretty quickly.

“But I think I’ve learned from it and can turn things back around this coming year.”

The 25-year-old Morikawa, who has won five times on the PGA Tour including two majors but is winless since the 2021 Open Championship at Royal St. George’s in Kent, England, was 2-over through seven holes before making birdies at Nos. 8 and 9, then adding three birdies and two more bogeys on the back.

The 20-year-old Kim, who has won the Wyndham Championship and the Shriners Children’s Open as a PGA Tour rookie in 2022, started with 10 straight pars before carding three birdies coming home in his 69.

“I got off to a slow start with the course playing long because it is soft from the rain yesterday, but then I saw some birdie putts drop on the back nine,” said Kim, who has six other victories around the world. “I just had to stay patient and eventually I got into a little groove after that first birdie.

“I feel like I’m playing pretty well right now and just want to keep it going. It was only the first day, but I’m happy to have played a bogey-free round. I’m just going to stick to my game plan and play the best I can tomorrow and on the weekend.”

Hovland, who made two eagles on the back nine while closing with a 66 last year to win the Hero for one of his six pro victories, holed a bunker shot for his fourth eagle in the last five rounds at Albany’s 14th hole and was alone at the top until making the only bogey in his 69 at No. 16.

Straka, winner of the Honda Classic last season who got into the Hero field as an alternate only because tournament host Tiger Woods withdrew on Monday because of a foot injury, collected six birdies and three bogeys in his 69.

Sam Burns overcame a double-bogey 7 on the sixth hole and three bogeys by making five of his seven birdies on the back nine in a 70 to sit alone in fifth, while Max Homa of Valencia and Cal had two birdies and a bogey in his 71 that put him in a tie for sixth with Tommy Fleetwood of England, who made three birdies before adding two late bogeys, and Cameron Young, who had six birdies, three bogeys and a double bogey.

Second-ranked Scottie Scheffler eagled the 15th hole to salvage a 72 and is tied for ninth with sixth-ranked Xander Schauffele of La Jolla and San Diego State, who was with the leaders before making a late double bogey and bogey, eighth-ranked Justin Thomas, who made three straight birdies before a double-bogey 6 at No. 16, and Tony Finau, who had four birdies and four bogeys.

Fifth-ranked Jon Rahm of Spain, who has won two of his last four starts and captured the Hero title in 2018, is tied for 13th at 73, while ninth-ranked Matt Fitzpatrick of England, the reigning U.S. Open champion, shot 74 and is tied for 15th.