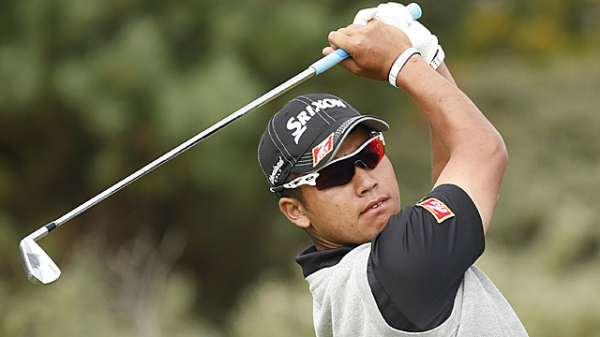 Hideki Matsuyama of Japan and Jimmy Walker both birdied the last hole and are tied for the lead after three rounds of the Hyundai Tournament of Champions on the Plantation Course at Kapalua Resort outside Lahaina, Maui, Hawaii.

Matsuyama, who has won six times in Japan and captured the Memorial Tournament on the PGA Tour last June, posted his second straight 7-under-par 66 by collecting four birdies on each nine after an opening bogey.

“The fairways are wide and the greens are big, so I can hit the ball and not worry about it  too much,” Matsuyama said through an interpreter. “I want to be relaxed (in the final round) and not let too many guys get past me.”

Walker, who claimed his first three PGA Tour victories last season at the age of 35, birdied four of the last six holes on the front nine and had two more birdies coming home.

Patrick Reed, twice a winner last season, had a bogey-free 68 and was two strokes back in a tie for third with Sang-Moon Bae of South Korea, winner of the season-opening Frys.com Open in October for his second PGA Tour victory, who recorded a 68.

Russell Henley, who held the first-round lead with a 65, posted a second straight 70 and was another shot behind in a tie for fifth with Brendon Todd, who had a 69.

Defending champion Zach Johnson, who was tied for the 36-hole lead with Walker, Henley and Bae, struggled to a 73 and was six shots back in solo 10th.