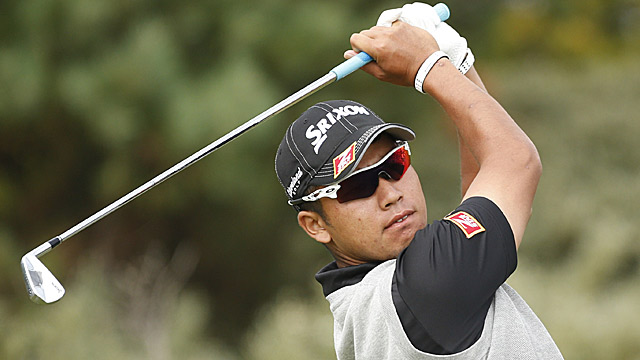 It was Kevin Kisner’s day most of the way until Hideki Matsuyama came on strong following an afternoon rain delay.

The third-ranked Matsuyama (pictured), who won the WGC-Bridgestone Invitational last week with a closing 61, birdied five of the last seven holes to post a 7-under-par 64 and tie Kisner for the lead midway through the 99th PGA Championship at Quail Hollow Club in Charlotte, N.C.

“I have to say my putting really saved me,” said the 25-year-old Matsuyama, who has 14 pro victories and is trying to become the first player from Japan to win a major title. “I hit some good shots, but overall putting was the key factor. I have read the putts better the last couple weeks and I have a new putter.

“I’m improving and it’s giving me the opportunity to win (a major). If I keep knocking on the door, I believe some day it will open.

The 33-year-old Kisner, who was tied for the first-round lead with Thorbjorn Olesen of Norway, carded a second straight 67 and is even with Matsuyama at 8-under 134.

Kisner, whose round was highlighted by a 48-foot birdie putt from off the seventh green, was four strokes ahead when the morning wave finished play.

“I hit the ball really well, but things really have to go your way to get to 8-under,” said Kisner, who has two PGA Tour victories but has never finished in the top 10 in the majors. “Even my bad shots worked out and I made a lot of putts. I hit plenty of fairways, the ball was coming off right where I aimed. I’m going to play loose on the weekend and have plenty of fun.

“I’ve been upset with how I’ve played in the majors so far in my career. I feel like I have the game to compete in majors, and tons of 30th to 40th, 50th-place finishes. That’s kind of been our goal for the year. We haven’t played well in them yet this year, but every year you learn more about the majors.”

Because of the rain delay, there were 16 players still on the course when darkness descended and they will return to finish the second round Saturday before those who make the cut play round three.

Seventh-ranked Jason Day of Australia, who won the 2015 PGA Championship at Whistling Straits, shot 66 and is two strokes back in solo third.

Francesco Molinari of Italy turned in a bogey-free 64 that included a 53-foot eagle hole-out on the seventh hole and is three shots back in a tie for fourth with Louis Oosthuizen of South Africa, the 2010 Open champion at St. Andrews, who totaled 67, and Chris Stroud, a winner in the Barracuda Championship last week, who is 2-under after 13 holes.

Justin Thomas, who has won three times this season, recorded a 66 and is five strokes back in a tie for seventh with 10th-ranked Rickie Fowler of Murrieta and Paul Casey of England, who both had 70s, while Byeong Hun An of South Korea came in at 69 and is six down in solo 10th.

U.S. Open champion Brooks Koepka had a 73 and is tied for 11th, ninth-ranked Alex Noren of Sweden is tied for 23rd after a 69, while fourth-ranked Rory McIlroy of Northern Ireland had a second 72 and is in a tie for 31st that includes top-ranked Dustin Johnson, who struggled for a 74, and eighth-ranked Henrik Stenson of Sweden, who wound up at 70.

Second-ranked Jordan Spieth saw his hopes to complete the Career Grand Slam take a hit with a 73 and is in a tie for 46th that includes sixth-ranked Jon Rahm of Spain, who had a 75.