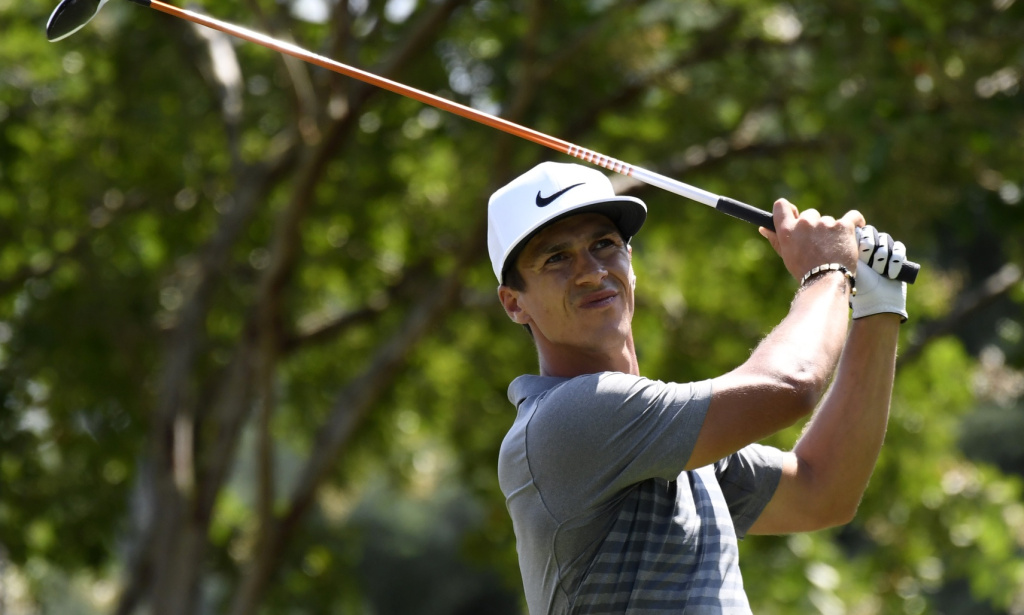 Thorbjorn Olesen has never finished in the top five of a major championship, but for one day at least, he is at the top of the leaderboard.

The 27-year-old from Denmark sank a 27-foot birdie putt on the final hole to shoot 4-under-par 67 and is tied for the lead with Kevin Kisner after the first round of the 99th PGA Championship at Quail Hollow Club in Charlotte, N.C.

“My putting was the difference and the last one was the longest I made,” said Olesen (pictured), who has only two top-10 results in the majors, the best a tie for sixth in the 2013 Masters. “I played really well, tried to hit the safe shot to the middle of he green and give myself some chances. The greens are so quick, especially down-grain.

“ … I feel like I’ve learned a lot over the years playing quite a few majors now. I feel like I’m better prepared to be in contention over the weekend and have a chance to win. I feel more confident with myself and my game than I probably did a few years ago.

“So obviously a lot of things can happen. I just have to stay relaxed the next few days.”

Kisner, whose best major finish was a tie for 12th in the 2015 U.S. Open at Chambers Bay, made a 25-foot birdie putt on the last hole late in the day to catch Olesen.

“It was really smooth; every time I had a difficult shot, it worked out,” said Kisner, who captured the Dean & DeLuca Invitational earlier this season for his second PGA Tour victory. “I’m happy with the way I played and hope to keep it going.

“I love the greens, they are just like the ones I grew up on. I’m comfortable with the speed, and really enjoyed it out there today.”

Brooks Koepka, the U.S. Open champion, collected four birdies on the front nine in a 68 and is tied for third with Chris Stroud, who won the Barracuda Championship last week, Gary Woodland, Grayson Murray and D.A. Points.

Rickie Fowler of Murrieta, ranked 10th in the world, overcame a triple-bogey 7 on the fifth hole to shoot 69 and is tied for eighth with Paul Casey of England, Patrick Reed, Bud Cauley, Tony Finau, Brian Harman and Jim Herman.

Top-ranked Dustin Johnson shot 70 and is in a tie for 15th that includes third-ranked Hideki Matsuyama of Spain, sixth-ranked Jon Rahm of Spain and seventh-ranked Jason Day of Australia.

Second-ranked Jordan Spieth, who can complete the Career Grand Slam with a victory in the PGA, rallied with two late birdies for a 72 and is in a tie for 34th that includes fourth-ranked Rory McIlroy of Northern Ireland, a two-time PGA champion.

Eighth-ranked Henrik Stenson of Sweden totaled 74 and is in a tie for 62nd that includes ninth-ranked Alex Noren, another Swede, while fifth-ranked Sergio Garcia is tied for 80th after a 75.

Five-time major winner Phil Mickelson, the 2005 PGA champion, did not make a birdie while struggling to a 79 and is tied for 127th.