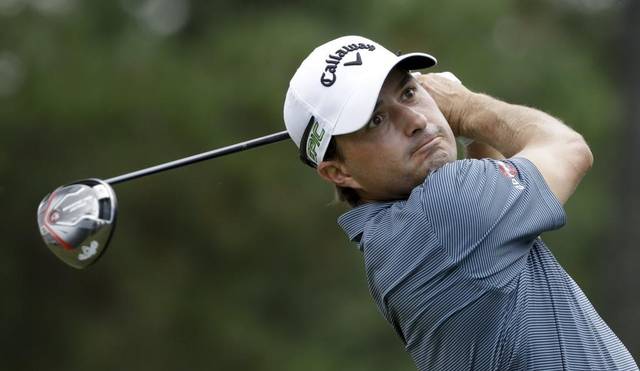 Kevin Kisner has never won a major, or even finished in the top 10, yet he has held at least a tie for the lead after each of the first three rounds in the 98th PGA Championship.

The 33-year-old Kisner, who has won twice on the PGA Tour, made a bogey on the final hole but his 1-over-par 72 was enough to give him a one-stroke lead over Hideki Matsuyama of Japan and Chris Stroud heading to the final round at Quail Hollow Club in Charlotte, N.C.

“I’m happy I’m in the position I’m in,” said Kisner, whose best major finish was a tie for 12th in the 2015 U.S. Open at Chambers Bay. “I had a chance to run away from guys and take people out of the tournament that were four or five, six back, and I didn’t do it. Now I’m in a dogfight tomorrow and I have to be prepared for that.

“I’ve been happy with the driver all week. I drove it really well, and then today I hit a lot of great putts that just burned edges. I thought the greens were more difficult to hold putts. Nobody in our group made hardly anything.
“Obviously not many in the field did, with the scores, and hopefully tomorrow, they will all start falling.”

Kisner, who captured the Dean & DeLuca Invitational earlier this season, has a 54-hole total of 7-under 206.

Stroud, who shot 71, and Matsuyama, who totaled 73, both won PGA Tour events last week, the American capturing the Barracuda Championship and the third-ranked Japanese star taking the WGC-Bridgestone Invitational with a final-round 61.

Justin Thomas, a three-time winner on the PGA Tour this season, finished at 69 and is two shots back in a tie for fourth with Louis Oosthuizen, winner of the 2010 Open Championship at St. Andrews, who had two late birdies in a 71.

Grayson Murray sank an 18-foot eagle putt on the 15th hole en route to a 69 and is four back in solo sixth, while Graham DeLaet of Canada shot 68 and is another stroke down in a tie for seventh with Patrick Reed (69), Gary Woodland (69), Scott Brown (70) and Francesco Molinari (74) of Italy.

Rickie Fowler of Murrieta, ranked 10th, posted a 73 and is in a tie for 12th, seventh-ranked Jason Day of Australia is tied for 16th after ending a 77 with a quadruple-bogey 8 on the final hole, eighth-ranked Henrik Stenson is tied for 18th following a 70, and U.S. Open champion Brooks Koepka totaled 74 and is tied for 26th.

Second-ranked Jordan Spieth had his hopes of completing the Career Grand Slam with a PGA victory this week dashed with a 71 and is in a tie for 37th that includes sixth-ranked Jon Rahm of Spain, who also came in at 71.

Top-ranked Dustin Johnson and fourth-ranked Rory McIlroy of Northern Ireland both totaled 73 and are tied for 47th, while ninth-ranked Alex Noren of Sweden is tied for 59th after a 75.