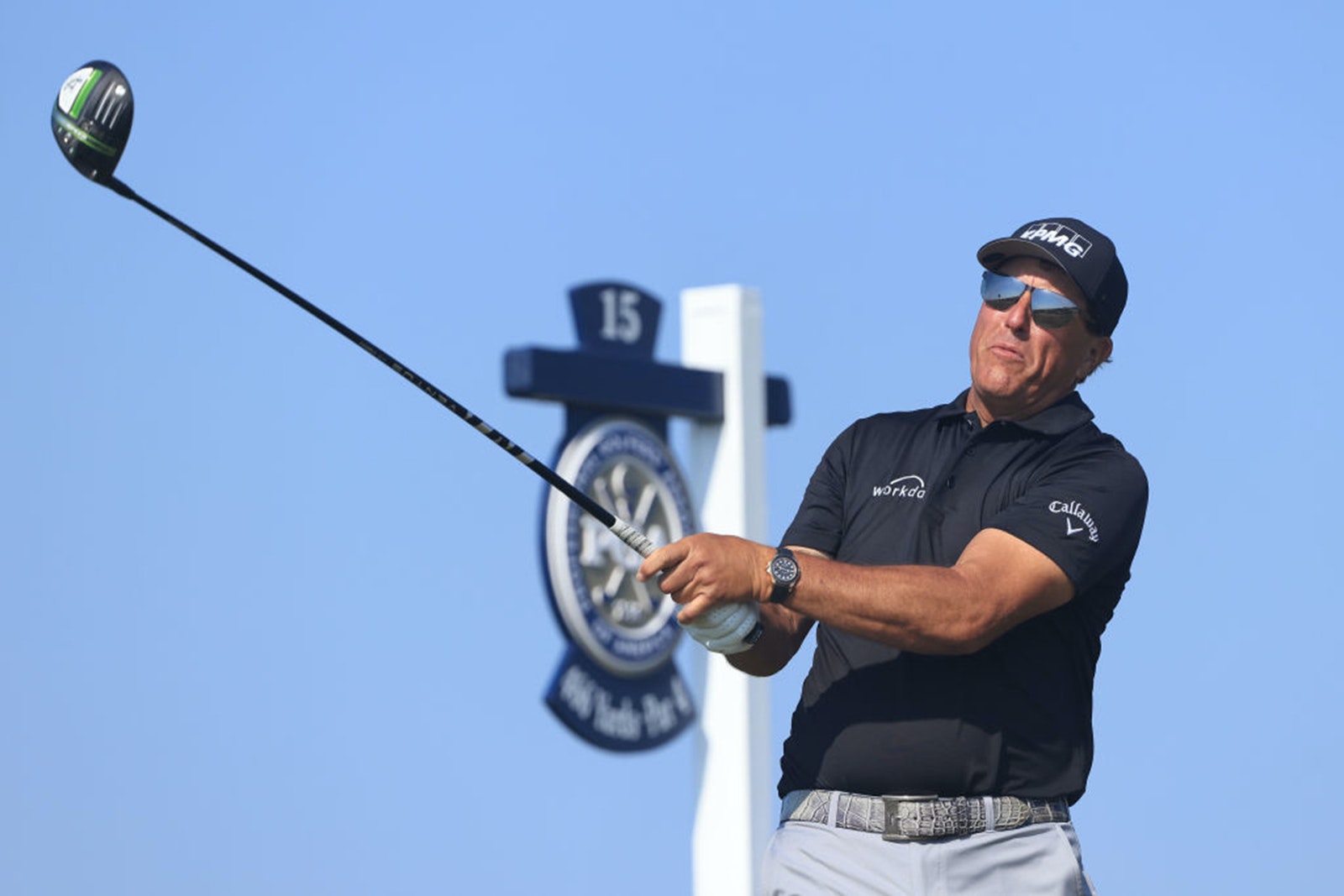 The 50-year-old Mickelson rallied while finishing on the front nine and shot 3-under-par 69 to tie Louis Oosthuizen of South Africa for the lead midway through the 103rd PGA Championship in more windy conditions on the Ocean Course at Kiawah Island Resort in Kiawah Island, S.C.

Lefty was told he held the lead during an interview on ESPN after making a 22-foot birdie putt while finishing on the ninth hole.

“So, if you were to tell me that like on Sunday night, I’d really enjoy that, but right now there’s a lot of work to do,” said Mickelson, who won the 2005 PGA for one of his five major titles. “But the fact is, I’m heading into the weekend with an opportunity, I’m playing really well and I’m having a lot of fun doing it.

“I was really fun to make a putt like that on my last hole. I was a little shaky on the 17th and 18th holes, but after I made the turn I hit a lot of good shots and made some putts. But the wind was just crazy, blowing one way for nine holes and when you make the turn going the other way.

“Right now, I have a keep playing well on the weekend to have a chance.”

Mickelson, who claimed the last of his 44 PGA Tour victories in the 2019 AT&T Pebble Beach Pro-Am but won twice on the PGA Tour Champions last year, had one birdie and three bogeys on the front nine and collected five birdies coming home to finish 36 holes at 5-under 139.

Oosthuizen, whose only major championship came in the 2010 Open Championship at St. Andrews, had sole possession of the lead before making his lone bogey on the 18th hole to finish at 68.

“It was tough out there today and on a lot of holes, you’re just happy to make par,” said Oosthuizen, who has won 14 times as a pro, but never in the United States. “I played nicely today and put myself in a position to have a chance on the weekend.

“It was windy today, about an eight (on a scale of 10), and the worst I’ve seen was Saturday at Royal St. George’s in 2011 (at the Open), which was a 10. But I played really solid and gave myself a lot of opportunities. I just have to keep playing the way I have in the last couple rounds.”

Reigning Masters champion Hideki Matsuyama carded a 68 and is two shots behind in a tie for fourth with two South Africans, Christiaan Bezuidenhout, who made a 31-foot eagle put on No. 11 in a 70, and Branden Grace, who held the lead before finishing double-bogey, bogey for a 71.

Corey Conners of Canada, the first-round leader at 67, struggled to a 75 and is three down in a tie for seventh with Sungjae Im of South Korea, Kevin Streelman and 2019 U.S. Open champion Gary Woodland, who all totaled 72, and Paul Casey of England, who came in at 71.

Fifth-ranked Bryson DeChambeau of Clovis is tied for 12th after a 71, while sixth-ranked Collin Morikawa of La Canada Flintridge and Cal, shot 75 and is tied for 25th, and No. 12 Patrick Cantlay of Los Alamitos wound up at 73 and is in a tie for 32nd that includes ninth-ranked Tyrrell Hatton of England, who had a 75.

Third-ranked Jon Rahm of Spain also finished at 75 and is in a tie for 39th that includes seventh-ranked Rory McIlroy of Northern Ireland, the PGA champion in 2012 at Kiawah Island, who had a 72.

Jordan Spieth, who can complete the Career Grand Slam by winning the PGA, could manage only a 75 and is tied for 51st, while eighth-ranked Patrick Reed also had a 75 and is in a tie for 63rd that includes 10th-ranked Webb Simpson, who wound up at 74.

Top-ranked Dustin Johnson finished at 76-74—150, second-ranked Justin Thomas, who won the 2017 PGA Championship, totaled 75-75—150, and fourth-ranked Xander Schauffele of Torrey Pines and San Diego State wound up at 73-77—150, all missing the cut by one stroke.