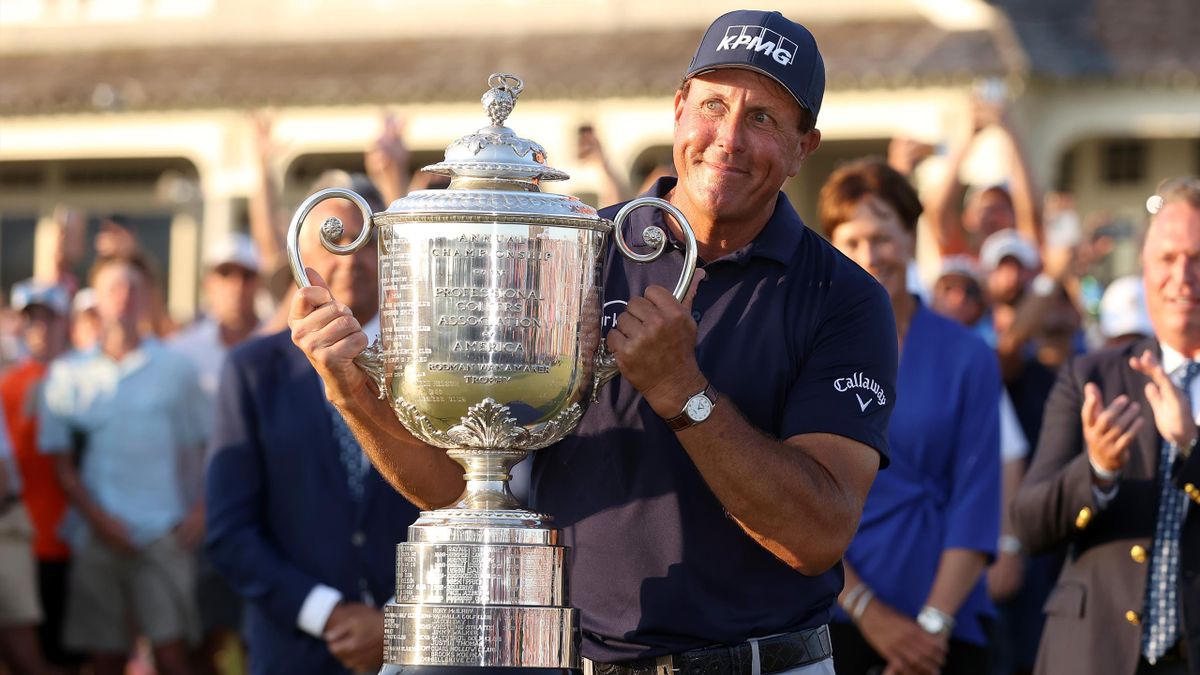 Phil Mickelson pulled off a win for the aged.

The 50-year-old Mickelson became the oldest player to win a PGA Tour major championship, shooting 1-over-par 73 to hold on for a two-stroke victory over Louis Oosthuizen of South Africa and Brooks Koepka in the 103rd PGA Championship on the Ocean Course at Kiawah Island Resort in Kiawah Island, S.C.

Julius Boros was the previous oldest major winner, at 48 when he won the 1968 PGA.

“This is just an incredible feeling,” said Mickelson, who claimed his sixth title in the Grand Slam events, including the 2005 PGA at Baltusrol and first since the 2013 Open Championship at Muirfield Village in Scotland. “I kept believing this was possible, even though everything indicated that it wasn’t. I’ve been able to work extra hard and maintain my physical condition.

“This game of golf is what I do and I enjoy the challenge. I was able to concentrate and come out on top. What a player Brooks Koepka is. I could see his potential he had the first time I played with him in 2013.

“It was a great week with my brother, Tim, on the bag and he really helped me win. It’s been an incredible day and I didn’t let myself think about this until now. … I really appreciate holding this Wanamaker Trophy.”

Lefty, who will make his seventh attempt to complete the Career Grand Slam next month in the U.S. Open at Torrey Pines Golf Course in La Jolla where he grew up, made three birdies and three bogeys on the first six holes, then built a four-stroke lead with a 12-foot birdie putt at No.10.

Mickelson kept the lead the rest of the way despite making three bogeys on the back nine, but sank a short birdie putt at No. 16 and finished 72 holes at 6-under 282 to claim his 55th victory on the PGA Tour and 65th as a pro.

“This (winning the PGA) will give me five more tries to win the U.S. Open and I hope I can do it,” said Mickelson, who has finished second six times in our national championship. “It would be great to do it at Torrey.”

Oosthuizen, whose only major title came in the 2010 Open Championship at St. Andrews, also closed with a 73 that included a crushing double-bogey 6 on the 13th hole, where he hit his third shot into the water.

Koepka, who won the 2017 and 2018 U.S. Open plus the 2018 and 2019 PGAs, posted a 74 playing in the final twosome next the Mickelson, taking a double-bogey 7 on the second hole, making three bogeys on the first four holes of the back nine before two late birdies left him at 74.

Shane Lowry of Ireland, the reigning Open champion, had three birdies on a flawless last 10 holes to card a 69 and finished four shots back in a tie for fourth with three-time major champion Padraig Harrington, also of Ireland, who shot his own 69, Harry Higgs, who finished at 70, and Paul Casey of England, who wound up at 71.

Third-ranked Jon Rahm of Spain and sixth-ranked Collin Morikawa of La Canada Flintridge and Cal both totaled 68 and were five down in a tie for eighth with Abraham Ancer of Mexico (65), Justin Rose of England (67), Will Zalatoris (70), Scottie Scheffler (70), Tony Finau (71), Rickie Fowler (71) and Kevin Streelman (75)

Eighth-ranked Patrick Reed tied for 17th after a 70, while 10th-ranked Webb Simpson shot 72 and finished in a tie for 30th that included Jordan Spieth, who could have completed the Career Grand Slam by winning the PGA, but wound up at 74.

Fifth-ranked Bryson DeChambeau of Clovis struggled to a 77 and wound up in a tie for 38th that included ninth-ranked Tyrrell Hatton of England, who had a 72, while seventh-ranked Rory McIlroy of Northern Ireland, the PGA champion in 2012 at Kiawah Island, tied for 49th after his own 72.