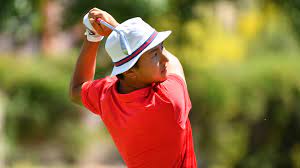 Alex Lee of Sacramento led local qualifying for the 121st U.S. Open on June 17-20 at Torrey Pines Golf Course in La Jolla in June by shooting 7-under-par 66 at Dragonfly Golf Club in Madera.

“I mean, I’ve played this course hundreds of times,” said Lee, whose caddie was former Fresno State associate athletic director Paul Ladwig. “So, you know, during my four years (at Fresno State), I know the course pretty well.

“We kept talking today about all the good walks we’ve had. I loved my four years as a Bulldog. I’m extremely thankful for the opportunity to play D-I golf. And the support we got from the valley was awesome.

“(Pro golf), it’s tough for sure. It’s expensive, there’s lots of travel, entry fees are expensive and then Q-school is a couple grand. So, yeah, it’s tough, but I’m gonna do it for as long as possible.”

Also moving on to final qualifying were Blake Hathcoat of Fresno and St. Mary’s College, Kevin Huff of Fresno, Blake Bourelle of Bakersfield and Michael Weaver of Fresno, who all finished at 68.

In qualifying on the Grove Course at Indian Ridge Golf Club in Palm Desert, Gunner Wiebe of Sherman Oaks shot 3-under 69 to tie for first with Kevin Geniza of Corvallis, Ore., Casey Adams of Olympia, Wash., and Chris Evans of Bermuda Dunes, while Harold Ezra Calubid if Murrieta also qualified at 70.

Matt McCarty of Scottsdale, Ariz., led qualifying at the Club at Ruby Hill with a score of 9-under 63, followed by James Song of Rancho Santa Fe at 65, while Alex Chin of Pleasanton, Gregor Main of Danville and Derek Ackerman of Half Moon Bay all moved on at 67.

Joe Highsmith of Lakewood, Wash., and Pepperdine finished first in qualifying at Andalusia Country Club in La Quinta at 7-under 65, while Roy Cootes of Rolling Hills, Bryan Gergna of Riverside, Davis Kirkland of Los Angeles and Dalan Refioglu of Foster City all qualified for the next round at 69.

Ethan Ng of New York led the way with a score of 3-under 69 at El Macero Country Club, followed by Brett Viboch of Sacramento, Steve Watanabe of Pleasant Hill, and Jalen Griffin of San Francisco at 70, while Taylor Lowe of Davis advanced with a 70.

Mark Anguiano of Playa Vista led qualifying at Arroyo Trabuco Golf Club in Mission Viejo with an 8-under 64, while David Kim of Buena Park shot 68, and Raj Samra of Downey, Michael Lascari of La Habra Heights and Luis Carrasco Jr. of Irvine all moved on at 69.

Wayne Payne of Menlo Park, Chris Marin of Monterey and Nick Moore of Monterey all shot 3-under 69 at The Preserve Golf Club in Carmel to advance along with Erick Justsesen of Roseville, who came in at 70.

On the Classic Course at Bermuda Dunes Country Club, Jared Kinoshita of Bakersfield led the way at 6-under 66, while Jonathan Garrick of Los Angeles totaled 67, and Charles Reiter of Palm Desert, Corey Shaun of Encinitas and Cullen Brasfield of La Quinta all went to the next round with 68s.

Joey Zambria of Camarillo led qualifying at La Purisima Golf Course in Lompoc with a score of 4-under 68, while Francis Catalano of Camarillo, Gregory Moss of Sherman Oaks and J.R. Warthen of Pismo Beach all moved on with 71s, as did Jinho Chung of Cerritos at 72.

Tyler Raber of El Macero shot 3-under 68 to lead the way at Peachtree Golf and Country Club in Marysville, with Ethan Davidson of Simi Valley and Shintaro Ban of Las Vegas advancing with 69s, and Donnie Baucom of Fair Oaks and Andrew Bonner of Ripon making it at 70.

At The Classic Club in Palm Desert, John Dearth of West Covina topped the field at 4-under 68, while Ryan Emery of Surprise, Ariz., and Sam Gillis of San Jacinto advanced at 69.

Roman Aragon of Mission Viejo, Christopher Tuulik of San Diego, Kevin Lee of Buena Park and Bryan Harris of Newport Beach all moved on at 2-under 70 on the South Course at Ironwood Country Club in Palm Desert.

Connor Williams of Escondido and Shiryu Oyo of Japan led qualifying at 6-under 66 at The Grand Golf Club in San Diego, while Harrison Kingsley of Murrieta moved on at 67, as did Yousseff Guezzale of La Jolla and Perry Cohen of Switzerland, both at 68.