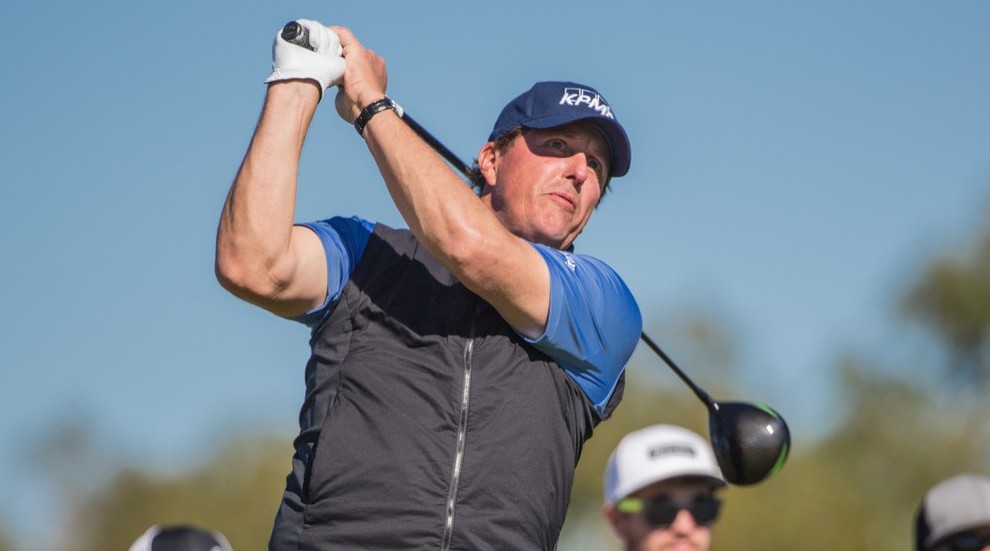 Phil Mickelson is undisputed King of the West Coast swing, with 19 victories in California and Arizona, and this week he gets another chance to make it an even 20.
Lefty tees it up on Thursday in the AT&T Pebble Beach Pro-Am, which he won for the fourth time in 2012, when he played alongside Tiger Woods and shot 65 to blow away his longtime rival by nine strokes.
“I love this tournament … I love the golf courses,” said the 46-year-old Mickelson, who ended a run of 20 consecutive years in the tournament on the Monterey Peninsula two years ago because of a family vacation. “I’ve developed some traditions here over the years. Whether it’s the restaurants where I eat breakfast, lunch or dinner, or if it’s the people I have dinner with.
“We’ve had those little traditions that have been going on for many years. When I missed it last year, it was a lot more than just the golf and tournament that I missed. I missed the whole environment.
“I missed it a lot. Especially when we get great weather. But even in bad weather, it’s great. There’s so many people here I enjoy hanging with and spending time with. I went to dinner and had some drinks with friends that I really missed last year. We’ve made it kind of a tradition every year of getting together. So, it’s more than just the golf at this tournament, it’s special, and I really missed it.”
When he returned last year, Mickelson seemed headed for a fifth victory, which would have tied Mark O’Meara for the tournament record. He took a two-stroke lead into the final round at Pebble, where his maternal grandfather, Al Santos, was one of the first caddies in 1919.
However, Lefty closed with a 72 and lipped out a five-foot birdie putt on the final hole that would have put him in a playoff with winner Vaughn Taylor.
“It never crossed my mind that one on 18 wouldn’t go in,” said Mickelson, who has 42 victories in his PGA Tour career, but none since the 2013 Open Championship at Muirfield to give him three legs of the Career Grand Slam, missing only the U.S. Open.
Mickelson has won every tournament that has been part of the West Coast swing, including his first PGA Tour victory as a 20-year-old amateur at the 1991 Northern Telecom Open on the other side of the state while he was attending Arizona State.
That was the first of his three victories in Tucson, and he also has won three times in the Phoenix Open, most recently in 2013; twice in the old Los Angeles Open at Riviera, most recently in 2009; twice in the old Bob Hope Classic in the California desert, most recently in 2004; and three times in his hometown event at Torrey Pines, most recently in 2001.
Lefty also captured the Mercedes Championship, now the SBS Tournament of Champions, twice at La Costa in Carlsbad, Calif., before the tournament moved to Kapalua in Hawaii.
“I love the West Coast, and those are some of my favorite tournaments,” said Mickelson, who tied for fourth in the 2010 U.S. Open at Pebble Beach. “I’m excited to play golf, and I practice very hard on the West Coast when the season is coming around and I haven’t played for a while. I’ve got a lot of energy, and I’m excited to get back out.
“I think all of these things, plus the fact that I grew up here and used to walk these fairways on the outside (of the ropes), I just have a great love for the West Coast. I’ve been fortunate to play well here.”
Mickelson started the 2016-17 season with a tie for eighth in the Safeway Open in October, but then was sidelined by two hernia surgeries and has been solid but a little inconsistent since he returned.
After he opened the new year with a tie for 21st in the CareerBuilder Challenge, the old Bob Hope, he tied for 14th in the Farmers Insurance Open at Torrey Pines and last week faded in the final round to a tie 16th in the Waste Management Phoenix Open.
“We didn’t have a lot of work to do nor the opportunity to do it this offseason, because I was out with surgery and didn’t swing a club,” said Mickelson, who was elected to the World Golf Hall of Fame in 2012. “The one day out of the three months I swung, I got another hernia and had to do it again.
“What I attribute the start to, and again, it’s not the start I hoped for, but knowing that I wasn’t going to be 100 percent to play the way I have the last couple of weeks.
“The game is closer, it’s not far off from where I want it to be and I’ll just continue working on fine tuning and touch, distance control, driving, and all these things that will, hopefully, help me play my best.”
The injury took away the advantage Lefty usually has on the West Coast, but he’s got one another shot this week.