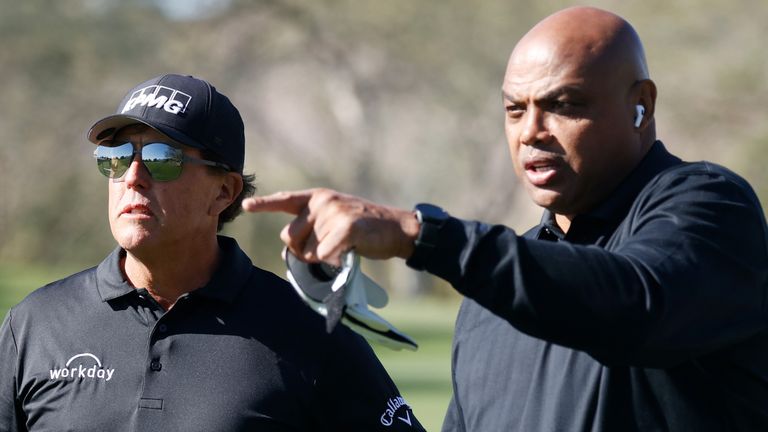 Phil Mickelson and NBA Hall of Famer Charles Barkley lost the first hole before dominating the rest of the way to claim a 4-and-3 victory over Steph Curry of the Golden State Warriors and two-time Super Bowl champion quarterback Peyton Manning in Capital One’s The Match: Champions for Change at Stone Canyon Golf Club in Tucson, Ariz.

The match was played under the modified alternate-shot format.

“Two people, two people thought this was going to happen: you and me,” Mickelson told Barkley as they embraced when it was over on the 15th green. “And that’s it.”

Mickelson and Barkley earned $5,455,000 to support Historically Black Colleges and Universities and organizations that support them, including the Thurgood Marshall Fund and United Negro College Fund.

In addition, more than 3.5 million meals were donated to Feeding America as part of charitable efforts connected to The Match.

Barkley’s nickname during his playing days was the “Round Mound of Rebound.”

Manning made a par putt on the first hole, but that was the only lead for Curry-Manning, as Mickelson made a five-foot birdie putts to win the next two holes, and he and Barkley took command by winning four straight and five of the next six for a 4-up lead after seven holes.

Curry-Manning were unable to not get closer than 3-down the rest of the way, even though Curry reportedly is a scratch golfer and Manning plays to a handicap of 6.4. Neither played to his ability on this day and Mickelson was able to guide Barkely, a 25-handicapper, to victory.

This was the third version of The Match, and the first one that did not include Tiger Woods.