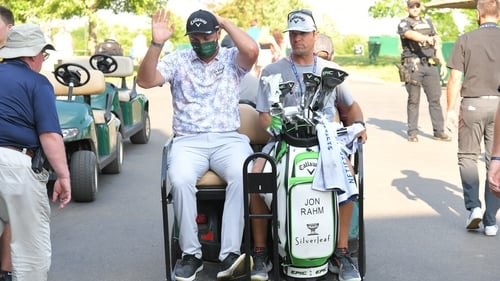 Third-ranked Jon Rahm of Spain was intent on repeating himself, until he got word that he tested positive for Covid-19.

Defending champion Rahm posted a brilliant 8-under-par 64 to take a six-stroke lead over Collin Morikawa and Patrick Cantlay heading to the final round of The Memorial Tournament at Muirfield Village Golf Club in Dublin, Ohio.

Afterward, he was told by officials that he tested positive for the virus, after being negative all week. After one positive test, officials ran another one, which confirmed the positive result.

“Rahm has tested negative every day, but his most recent test–which was performed after the conclusion of his second round (rain delayed) and before the start of his third round–returned positive at approximately 4:20 p.m. ET while Rahm was on the golf course,” a statement by the PGA Tour read in part. “The PGA Tour’s medical advisor requested a confirmatory test on the original sample, which came back at 6:05 p.m. ET, and was also positive.

“The PGA Tour’s medical advisor notified Rahm immediately upon completion of his round, and under Tour protocols, he will be withdrawn from the competition. Rahm is now in isolation, and in accordance with CDC guidelines, he will need to remain in isolation through Tuesday, June 15.

Rahm was trying to become the second player in tournament history to win The Memorial in consecutive years, as Tiger Woods actually won three in a row from 1999-2001.

Morikawa and Cantlay, who won the tournament in 2018, will enter the final round tied for the lead.

In round three, Rahm made three birdies and his only bogey at No. 9 going out, and then collected three straight birdies through No. 13 and three more in a row through No. 17 while tying the tournament’s 54-hole scoring record of 18-under 198 set by Woods in 2000.

After returning Saturday morning to finish the second round, which was halted by darkness the day before after two weather delays in the first round, Rahm made a hole-in-one with an 8-iron on the 183-yard 16th hole and shot 65 to take a two-stroke lead over Cantlay.

“I feel like every hole in one is unexpected,” Rahm said. “But it was just one of those good numbers. I knew if I pulled the 8-iron it would be over the pin, so I just aimed between the pin and the edge of the bunker, hit a straight 8-iron and let the wind do the rest, and it went in.

“I did not think any ball landing short of the pin would go in just because it’s coming in with such height from the elevated tee and the greens are soft. But, hey, I mean, I think you can kind of see my face of surprise, right, early on, because I was pretty sure that ball was going to be past the hole about 15 feet.”

Sixth-ranked Morikawa, from La Canada Flintridge and Cal, won the WGC-Workday Championship last year when it was moved to Muirfield Village, and continued his fine play on the course when he collected eight birdies in a 66.

Cantlay, from Los Alamitos and UCLA, sank a 22-foot birdie putt on the final hole to cap a 68 that included a single bogey at No. 16.

Branden Grace of South Africa rattled off four birdies on the back nine, including a 14-foot putt on the last hole to finish off a 67, and now is three shots back in a tie for third with Scottie Scheffler, who had six birdies before hitting his tee shot into the water on No. 16 and taking a double-bogey 5 on his way to a 69.

Max Homa of Valencia and Cal had three birdies and three bogeys in a 72 and is six down in solo fifth, while ninth-ranked Patrick Reed made four birdies on the first eight holes en route to a 69 and is one more down in a tie for sixth with Si Woo Kim of South Korea (68), Lucas Herbert of Australia (71), and Carlos Ortiz of Mexico (72).

Fifth-ranked Xander Schauffele of La Jolla and San Diego State made two double bogeys on the back nine in a 74 and is eight strokes behind in a tie for 10th with Aaron Wise of Lake Elsinore (70), Vaughn Taylor (71), reigning Open champion Shane Lowry (72) of Ireland and Jim Herman (72).

Eighth-ranked Rory McIlroy of Northern Ireland is tied for 22nd after a 71, fourth-ranked Bryson DeChambeau of Clovis finished at 73 and is in a tie for 29th that includes second-ranked Justin Thomas, who struggled to a 75.